The Rogue System Holster from CrossBreed is a versatile inside the waistband holster. I've been using this holster system with my Sig Sauer P365, and in this review, I'll explain what I like and dislike about the holster. 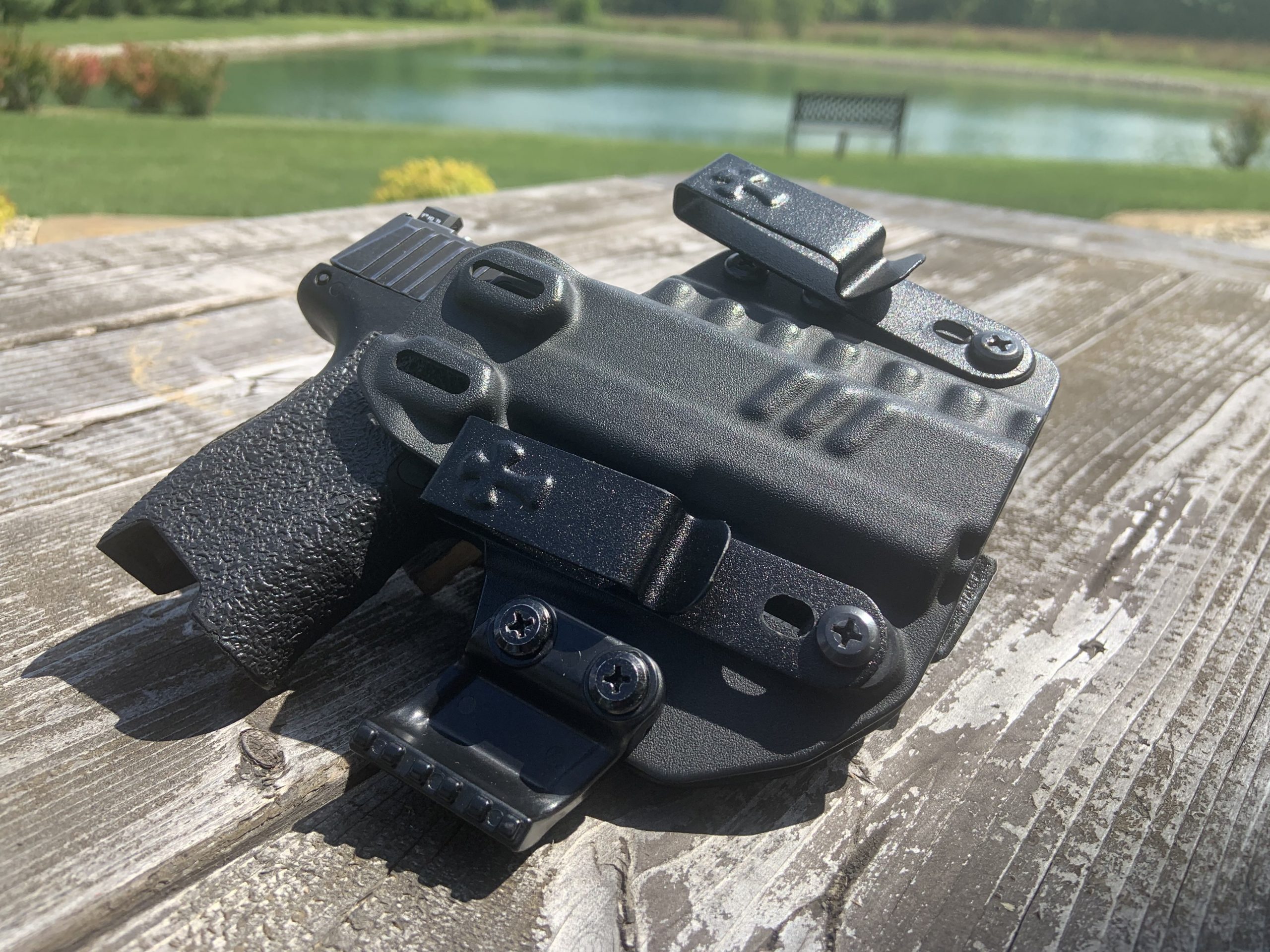 CrossBreed Holster's sells leather and Kydex holsters for a variety of firearm models in styles. CrossBreed appeals to many buyers because they manufacture holsters of different styles and carry positions from belly-bands to various inside and outside the waistband (IWB/OWB) configurations. The company has a reputation for making a wide range of functional holsters at an affordable price.

CrossBreed Holsters is a company founded by the late Mark Craighead, a Christian who understood the magnitude of the finished work of our Lord and Savior Jesus Christ on the cross. With the name ‘CrossBreed' and including the cross imagery in the logo and on components of products they sell, the company projects the Christian roots of Mark. Now back to their products. 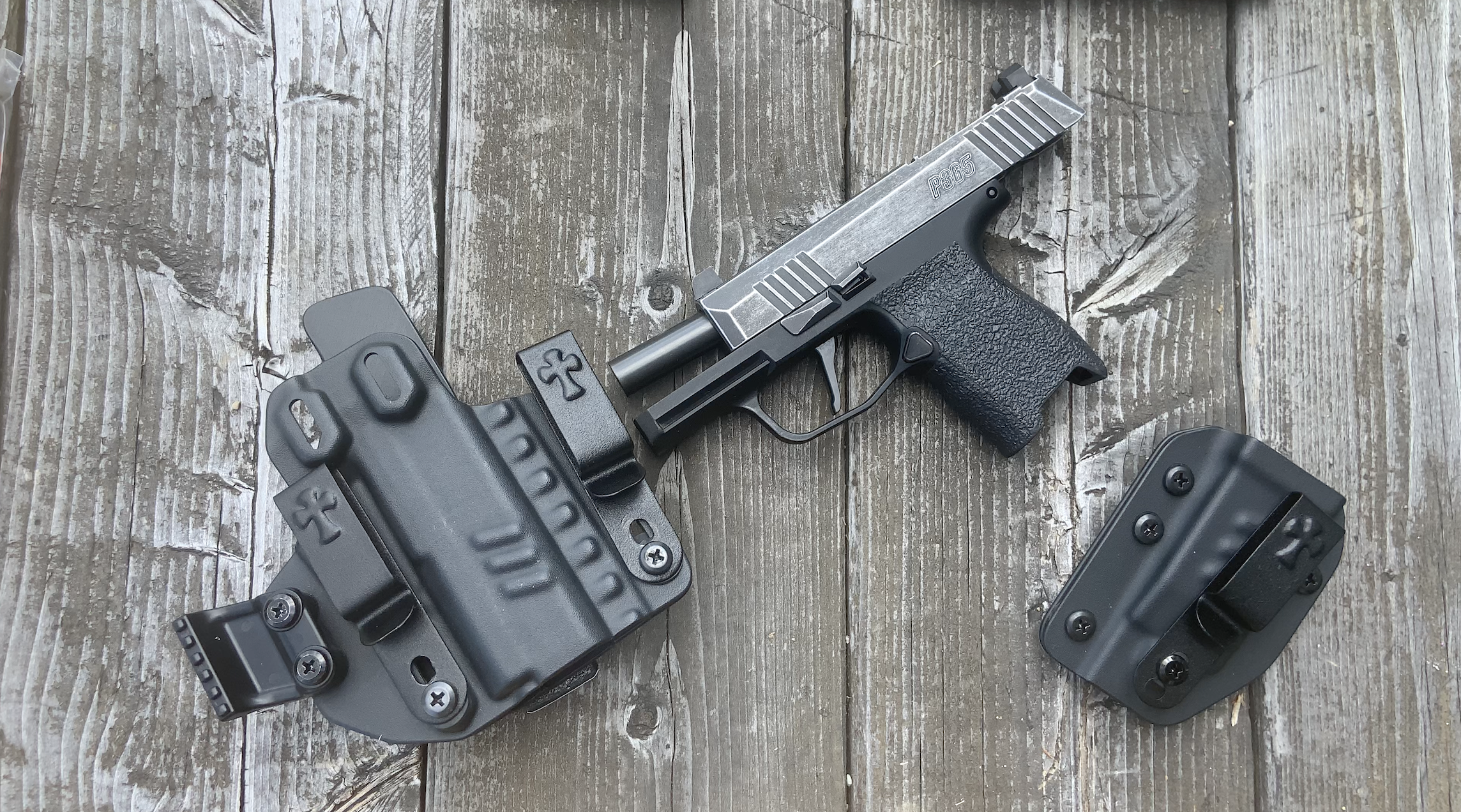 I received a Rogue System holster for my Sig Sauer P365 to test and evaluate. Like any product review, I use the item for an appropriate amount of time, and then provide an unbiased review of what I like and don't like. For the past three months, I've used the holster in various configurations and feel like I have a good idea of how the holster performs.

The Rogue System is more than a Kydex, IWB/OWB, handgun holster. The package comes with not just a holster for the gun, but a mag carrier as well. While carrying a spare magazine may not be your thing, it is not a bad idea if you can swing it, especially if you carry a micro-compact gun with minimal capacity.

The Rogue System also came cut to fit my optic (which happened to be off during the photos and video), and my taller XS F8 Sights had no problem fitting inside the holster.

A while back, ‘sidecar' holsters or those made with an attached mag carrier became popular. I used one for a while, but eventually realized the design created comfort and concealability issues. Manufacturers went to a two-piece design that allowed each part to flex independently, which helped. 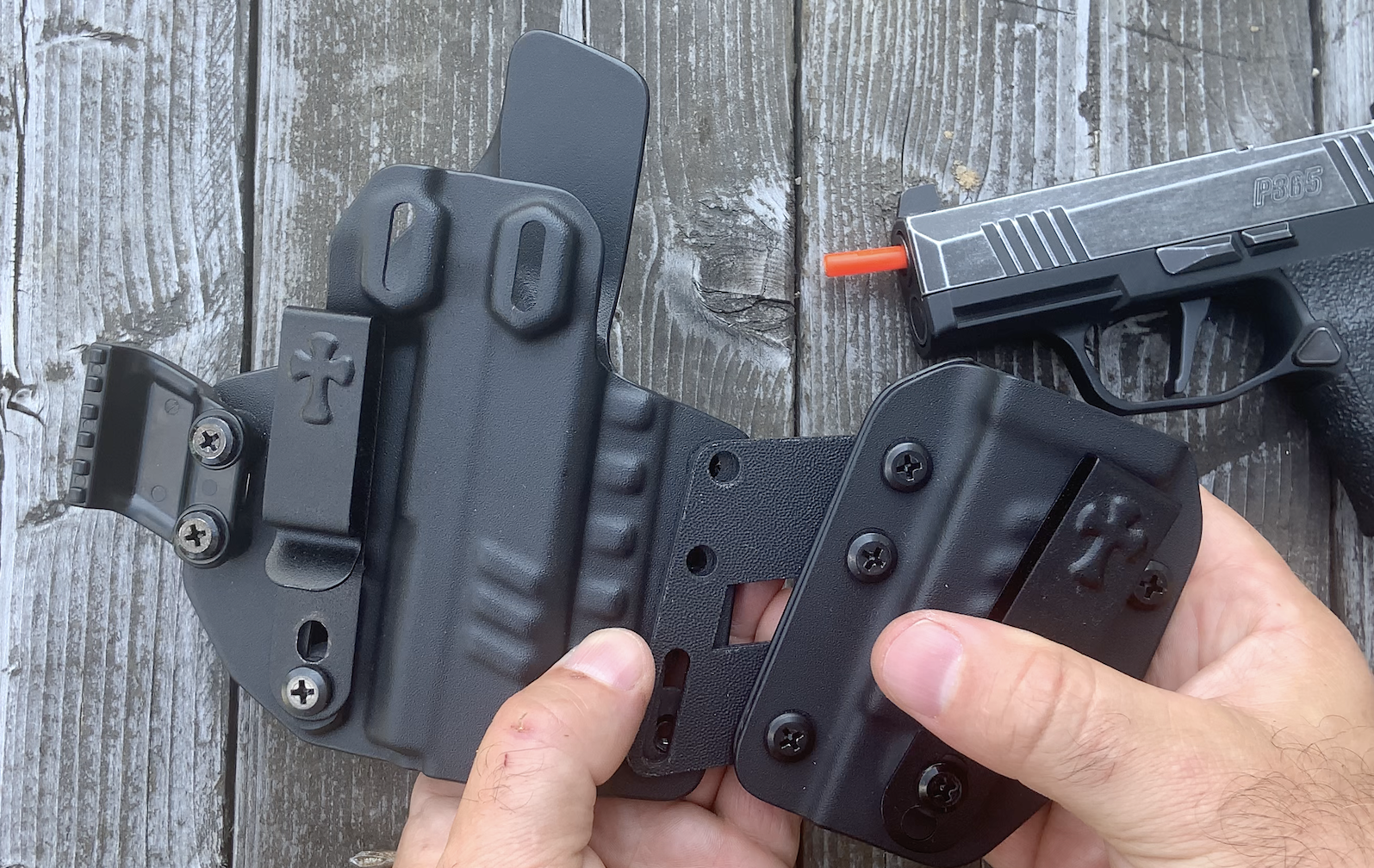 CrossBreed uses 2mm thick Kydex for the Rogue System, which balances weight and durability well. The system includes enough black anodized hardware to assemble the holster in a variety of configurations, which I'll explain later. You're also able to choose hardware in a few different colors. CrossBreed provides the following choice of clips for the Rogue System:

A while back, ‘sidecar' holsters or those made with an attached mag carrier became popular. I used one for a while, but eventually realized the design created comfort and concealability issues.

The Rogue System uses a flexible rubber piece to join the gun holster to the mag carrier. This method allows the holster and mag carrier to flex independently from each other. Included are two rubber pieces with slightly different shapes.

In the photo, you can see how the orientation and angle of the holsters to each other changes depending on which rubber piece you choose. With one, the mag holster rides relatively straight up and down, and with the other rubber piece installed, the holster has an outward cant. 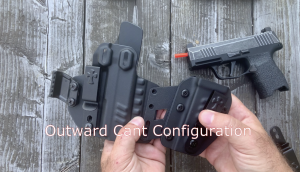 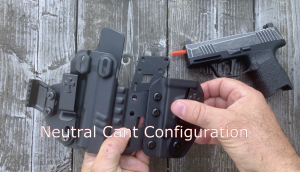 CrossBreed makes the Rogue System for right and left handed shooters, for most of the major gun models from Glock, Sig Sauer, Springfield, and Smith and Wesson.

As I mentioned, I've used the holster system for the last 3 months. I wore the holster configured for the appendix, inside the waistband (AIWB) carry, with the mag carrier attached and with the gun holster by itself. Testing in a traditional IWB (3 o'clock) configuration was limited because I don't carry in this way. However, traditional IWB is a popular carry method, so I wanted to provide at least some info for those carriers.

Comfort can be subjective, however, there are some principles of holster design that make one holster more comfortable than another. I tested the Rogue System with a Sig Sauer P365, which is a handgun with a short, 5.8″ slide. Handguns with short slides can actually be more difficult to conceal comfortably. I know this sounds counterintuitive, but I explain the reasons in this article.

The Rogue System holster is only as long as the P365's slide, which leads to some issues. The first of these is comfort. A small holster can't distribute pressure across a large area, so I've found small holsters create uncomfortable ‘hot-spots'. I don't think this would be an issue if you were using it with a larger gun like a Glock 19 or Sig P320, but I surmise that other guns similar to the P365 size (M&P Shield, Springfield Hellcat, Glock 43 etc.) would also create hot-spots.

A solution to this issue is for the company to manufacture the holster longer than the slide. For example, the Lexington holster and others from KSG armory have an ‘extended option' for guns with short slides like the P365. In the photo, you can see the Lexington and the Rogue System holsters. The length from the top of the trigger guard to the end of the holster is 4″ on the Lexington. On the Rogue System, it is only 3.3″. The added length on the holster makes a noticeable difference in comfort, and at least for a majority of users, isn't any harder to conceal. 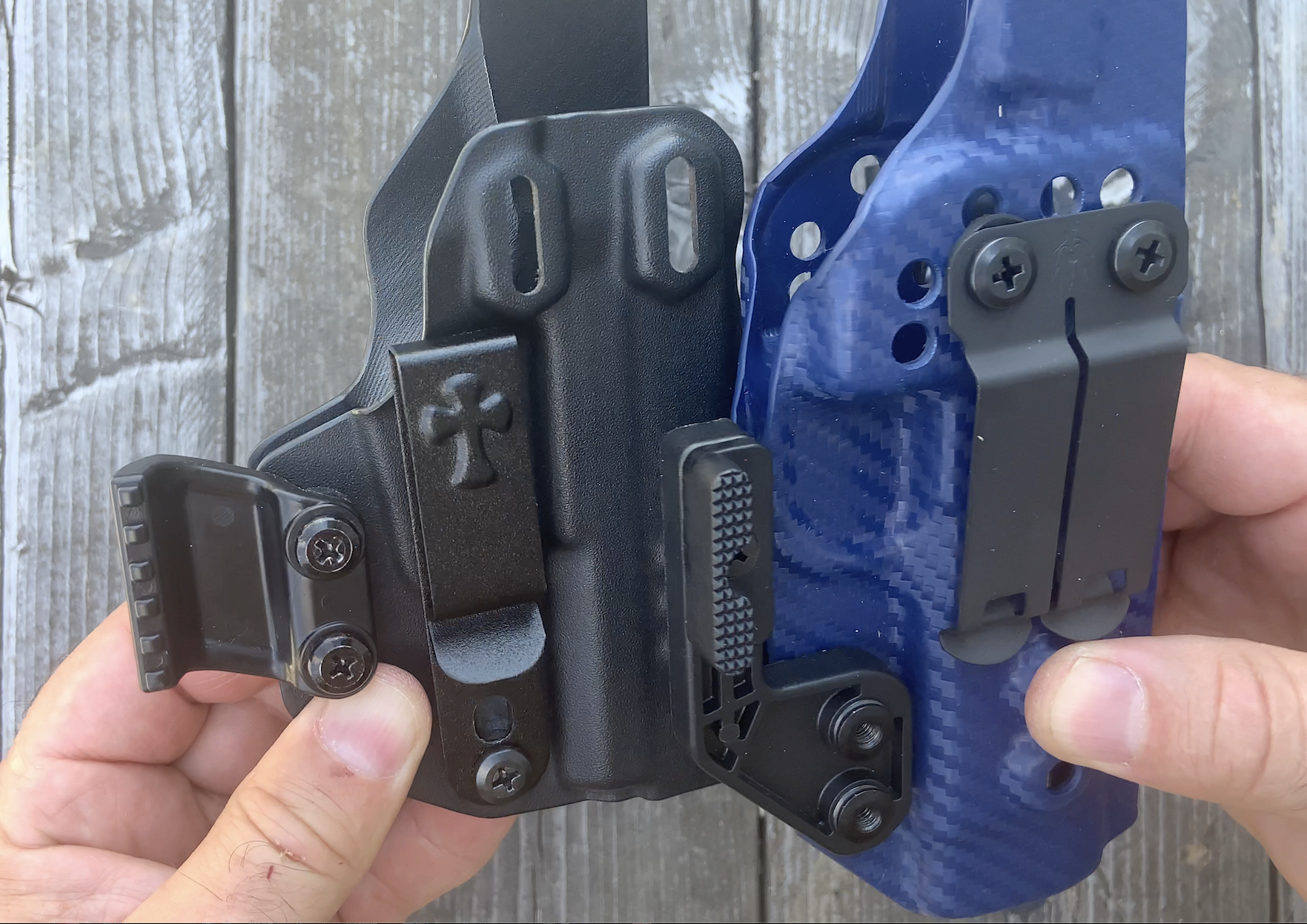 I found the holster concealed fairly well. In fact, I passed through a security checkpoint where law enforcement stared intently at my waist as I passed, but couldn't quite make out the gun. Only after passing through did I realize the location prohibited firearms on the premises. I suspect the officer paid special attention to me because my P365 printed slightly. The reason it printed is not really a surprise to me, here's why.

For guns with short slides, and holsters that don't extend past the slide, there isn't enough length below the belt. Without leverage below the belt, the grip (which is heavier) naturally tilts away from the body, causing it to print. One part of the solution is the same as mentioned above, make the holster longer for guns with a short slide. Another solution is to add a wedge toward the bottom of the holster. The wedge angles the grip back into the body and causes the gun to disappear under the shirt. 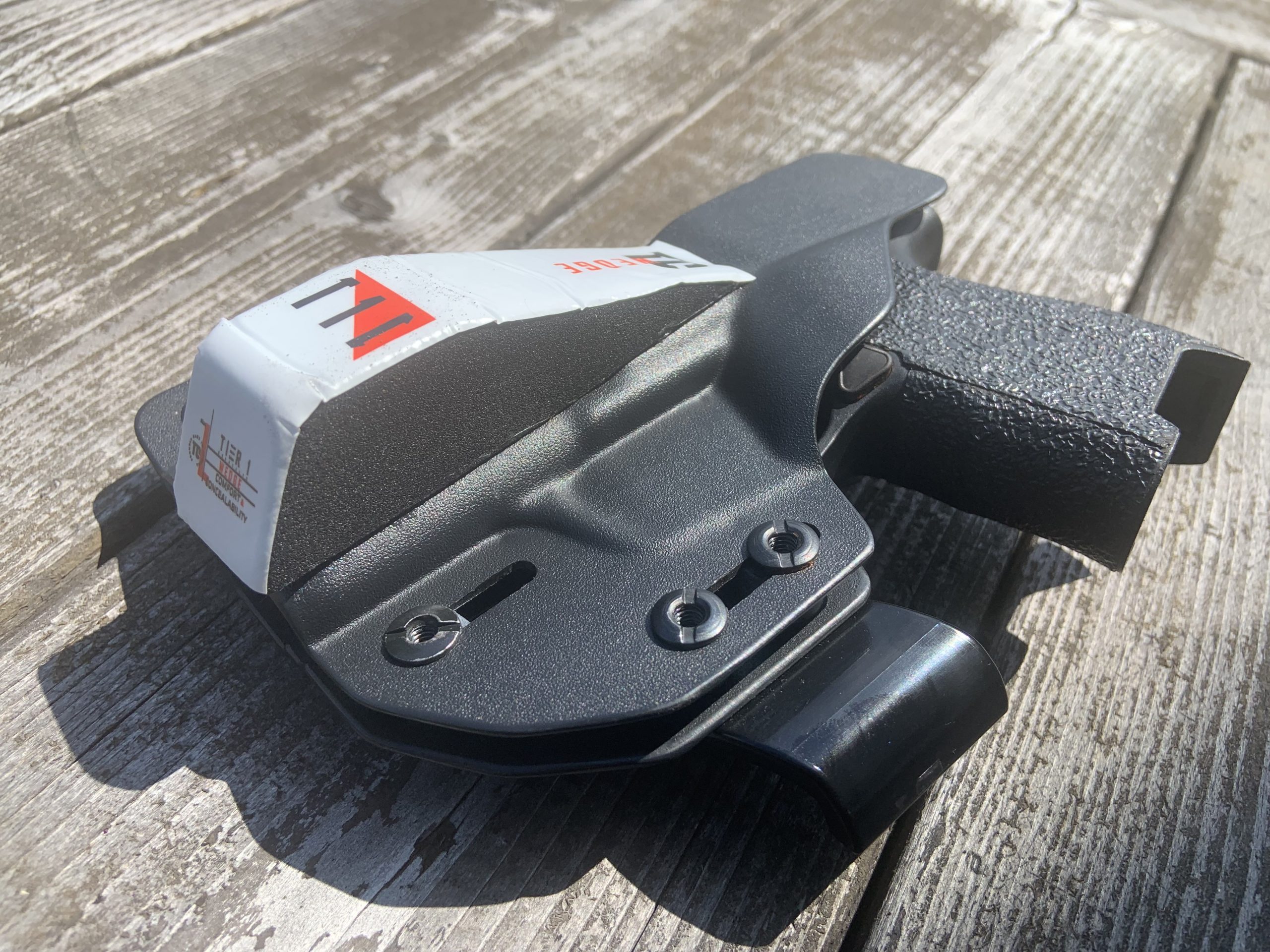 I added a foam wedge from Tier1Concealed to my Rogue System holster, which helped a lot. Just like with the assessment for comfort, I don't expect this would be an issue with a larger gun, but I would really like to see holster manufactures offer to extend the length on holsters for micro-compacts.

The Rogue System comes equipped with a claw. When installed, the claw applies pressure to the backside of your belt, twisting the grip in toward the body and aiding in concealment. Depending on how you position your gun, the claw is quite beneficial. While the claw that the Rogue System uses is good, I prefer the ModWing, that is adjustable in how much twisting force it applies.

Overall, I found the Rogue System concealed very well in both the holster only, and holster and mag carrier combinations. Especially considering that the holster does not have an extended length and did not come with a wedge. So, for carriers with a short waist, the Rogue System holster may be just what you're looking for.

There are four ways in which you can adjust the gun in relation to the belt. 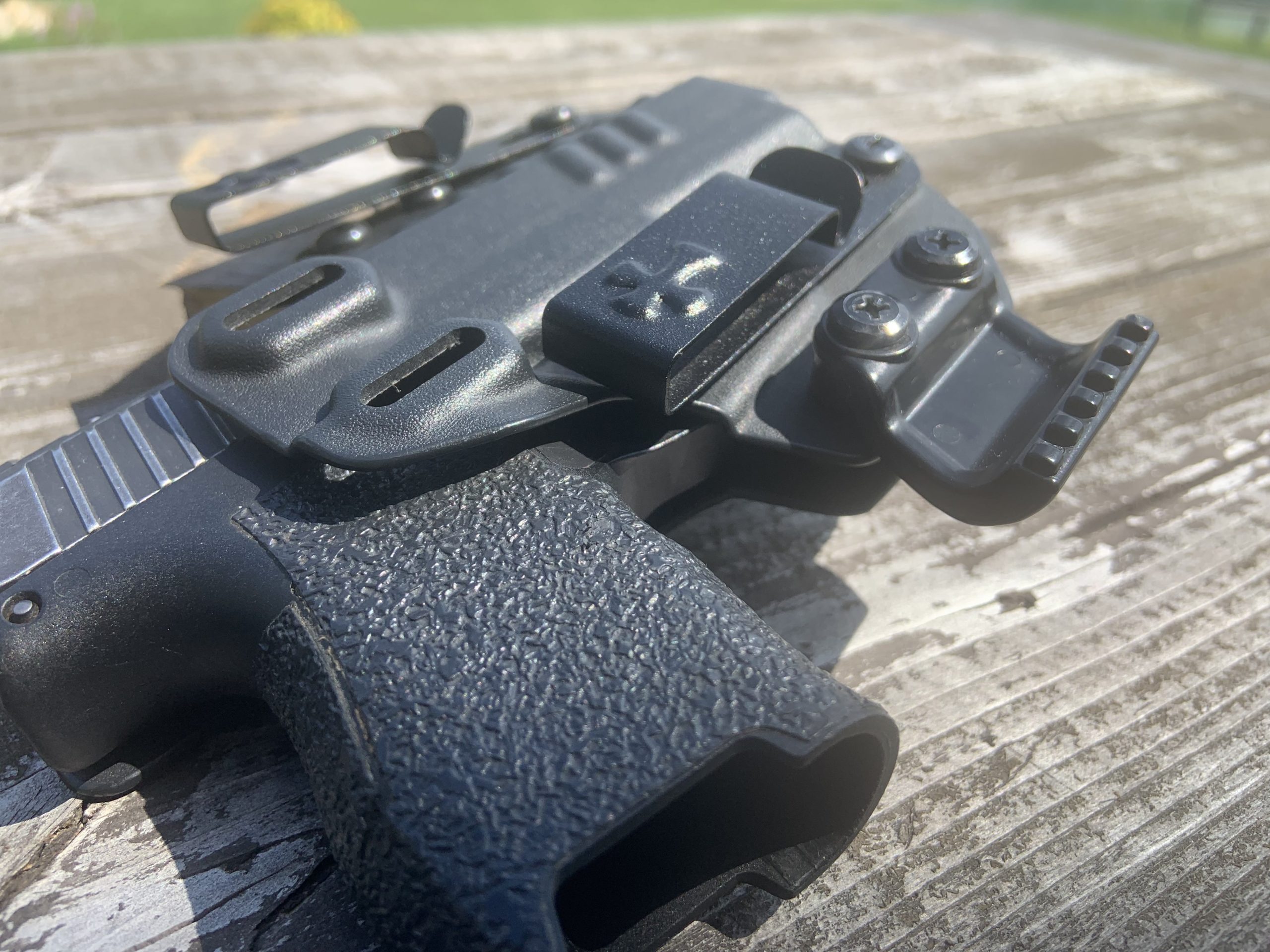 A holster that allows for all 4 adjustments is ideal. I prefer a holster with two clips as I find this keeps the gun from twisting or changing its cant. I already mentioned that due to its small size, the keel adjustment is less than ideal. A short holster also provides less room for ride height adjustment. I found that I could adjust the holster to allow a full shooter's grip, but doing so made it quite difficult to conceal it well. In order to balance concealability with my draw, I had to wear the gun slightly lower than I would otherwise.

CrossBreed offers the Rogue System with many clip options. However, I really prefer soft loops, or these incredible clips from discrete carry concepts. I think the DCC clips are the industry standard for top tier holsters. You can buy DCC clips separately and use them on the Rogue System, but it would be nice if CrossBreed offered this option. What would be cool is if CrossBreed could manufacturer a clip similar to the DCC clips, but with the CrossBreed logo. I'd definitely be a customer. 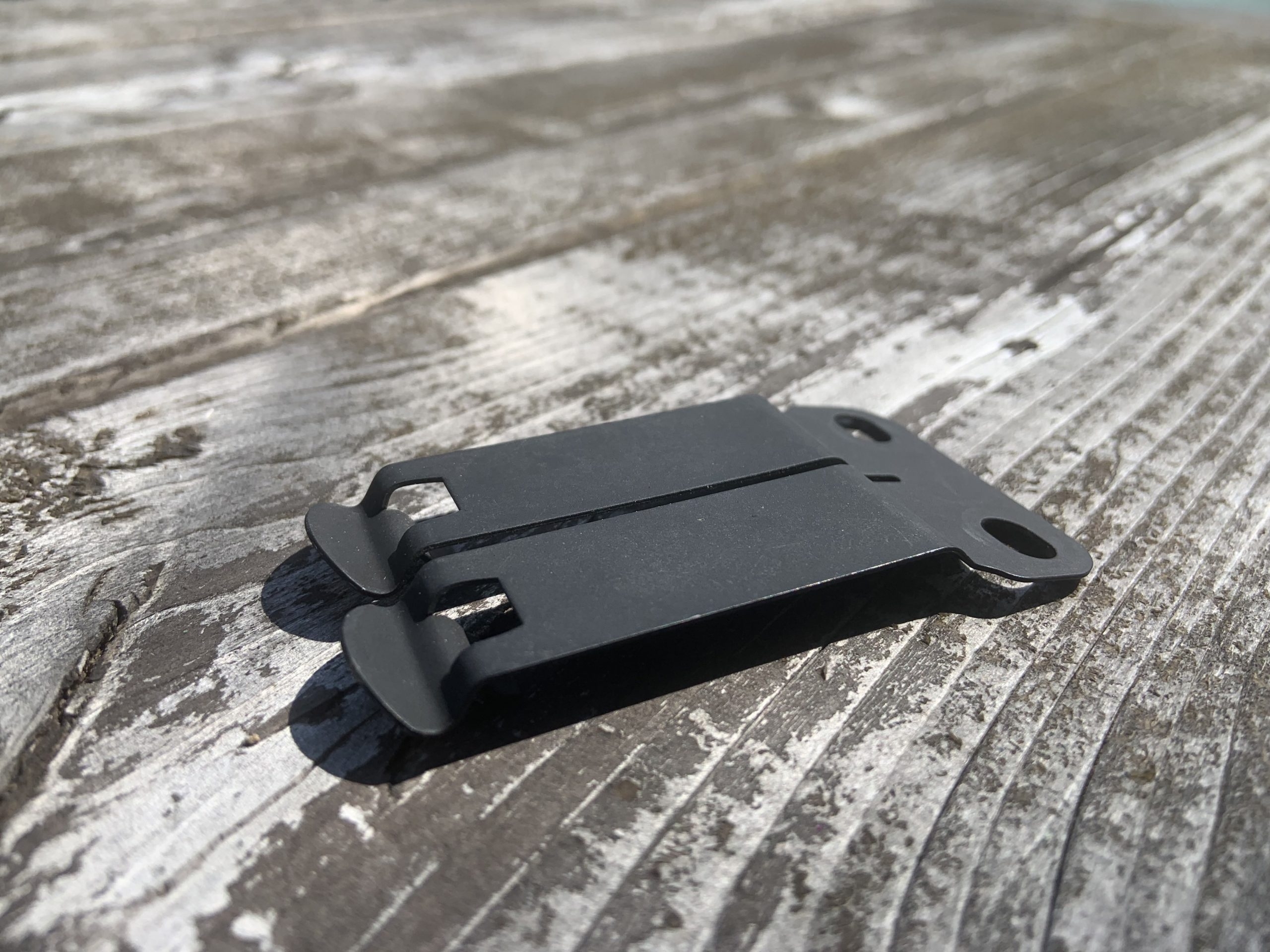 As mentioned, the Rogue System holster is very versatile, and you can wear it IWB or OWB. This can't be overlooked, especially if you're still trying to figure out in which method you are going to carry your everyday carry (EDC) handgun.

I know it seems I've been pretty hard on the Rogue System holster, however much of the gripes I have are directly due to gun I ordered the holster for. I suspect that if I were to order one for my Glock 19, I wouldn't have the issues I listed. That said, I think it's important to note, and at least in the case of the P365, it may be worth it to order the holster for the P365XL which is slightly longer.

Ranking the Pros and Cons —

It may not be perfect, but I have no issue recommending the CrossBreed Rogue system holster as an affordable option for a mid-sized gun. The holster checks all the boxes as far as safety and its versatility is ideal for someone trying to feel out their method of carry. If you need some help to figure out how to carry and conceal your handgun comfortably and securely, check out this 5-hour, online course called Holsters, Concealment, and Carry Positions! 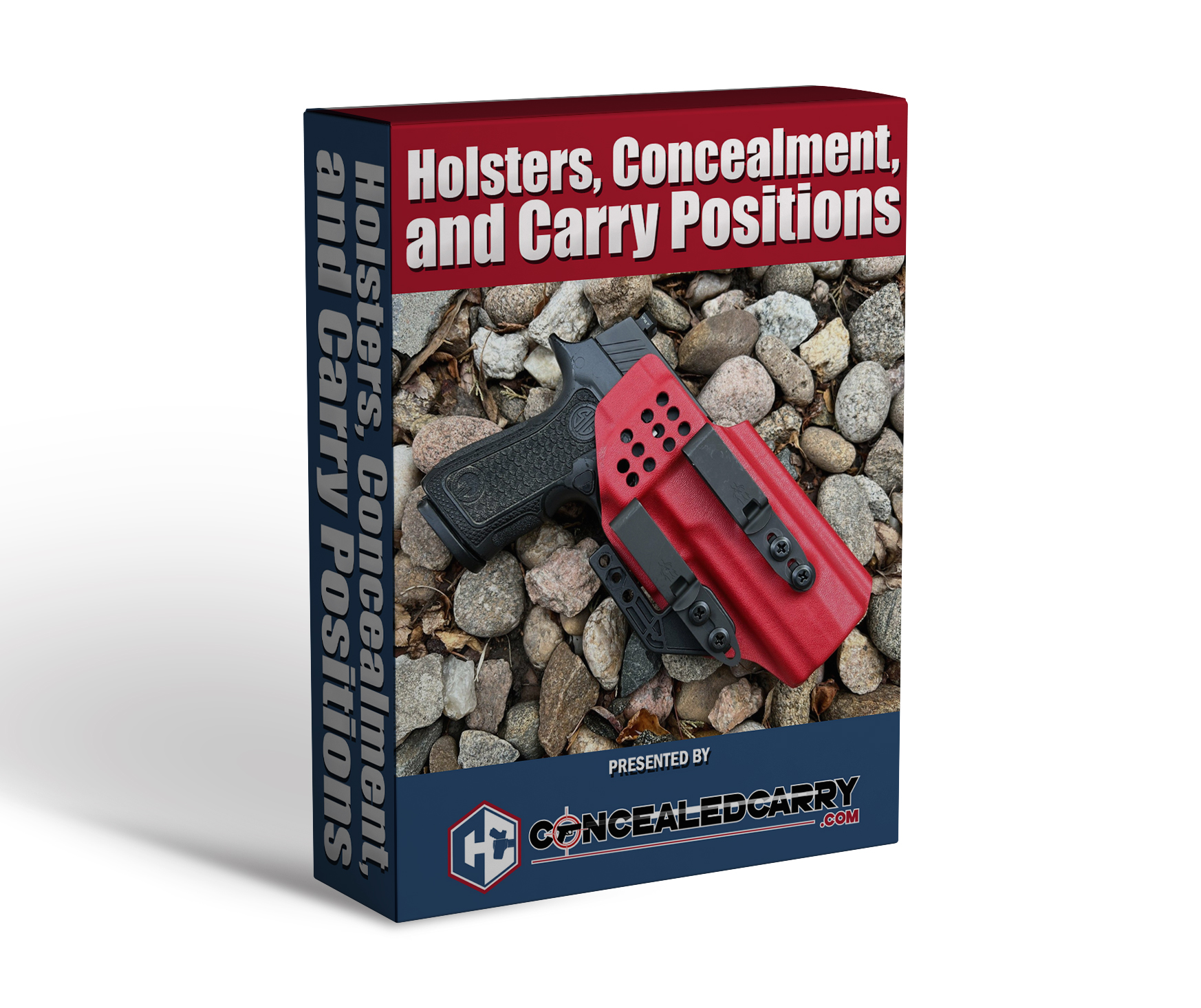