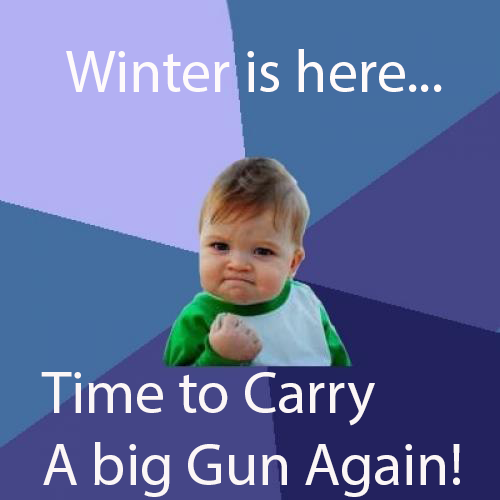 My personal Facebook feed is currently littered with my friends and some companies I follow saying something like this: Now that winter is here, I can carry a big gun again. The main reason why this train of thought exists is because guns are more easily hidden under multiple layers of clothing. Makes sense, at least to a degree. But, is this smart for every day carry and self-defense?

The short answer, is that carrying one gun for half the year, and another for the other half of the year is likely okay for some concealed carriers. Who? Those folks who go to the range a lot, train constantly, and practice concealed carry as a way of life. I have to admit that I needed more input from people, so I asked Matthew, Riley, and Jacob for their thoughts, and they all agreed that many of the people they teach should not adopt the frame of mind that it's okay to carry different guns at different times of the year.

I've picked out some quotes of theirs from my conversation with them, and these are gold nuggets, at least in my opinion, from people who are certifiably excellent shooters.  Riley had this to say:

Another way of looking at it for me is that for average shooters, I would advise to stick with the same gun in the same position as much as possible. But I am also encouraging them to try to achieve the level of skill where the gun matters less to them.

In other words, carry a gun that you are proficient with, but practice as much as you can to be as good as possible so that the equipment you use doesn't actually matter.

To expand on this point some, Jacob had this to say:

… beginner shooters should limit variables. Consistency is everything for muscle memory. But more advanced shooters get to a point where they can pick up almost any gun and shoot it as well as any other gun. In fact that is a good goal to have.

And then, much along the same lines, Matthew had this to say:

Switching guns can negatively affect the proficiency you have. Not just grip angle and the feel of the gun but if there is a difference in the way the mag release feels or its location and especially the sight picture and trigger feel/reset. It’s not like someone can’t shoot two guns equally well, but they have to have a solid foundation of fundamentals to be able to switch guns and shoot it well without any practice.

The one thing I can take away from my conversation with these guys the other day, is that the most important thing is to be training on a regular basis. You can't be going to the range once or twice per year and expect to have the fundamentals down 365 days per year. And, if that is you, someone who literally just trains once or twice a year, you should probably not be switching firearms at random because it creates a muscle memory issue.

Now, here is some advice I have:

It's always recommended to carry the biggest gun you can, with the highest magazine (or cylinder) capacity possible, all year round.

If that's a small pocket pistol with 6+1 capacity, then so be it. But, depending upon your skill level with firearms in general, that's what you should carry Summer, Fall, Winter, and Spring. Carrying that small pistol in the summer and then your Glock 19 in the winter doesn't make a lot of sense when you break it down unless your last name is Miculek, or you're about as good.

First, carrying the same gun, with the same holster rig all day, every day, is the best idea because it's what you know. And, hopefully, it's how you practice.

It's still different enough that it could screw you up if you're ever presented with an incident where self-defense was necessary to live.

Find a sweet spot between too big, and too small.

Okay, I hear you. Concealing that big gun in summer is just too difficult for you. So, what do you do?

What I'd recommend, instead of carrying a small gun in summer and a big gun in winter, is finding something in the middle and sticking with it all year–even if you need to adjust your wardrobe around your concealed carry lifestyle.

(that's important because this is a lifestyle we live)

Then, once you're as proficient as you need to be with all firearms, no matter the differences, it won't matter what you carry, and when.

So, maybe instead of carrying your Glock 43 in the summer and your Glock 19 in the winter, you just stick with a G26 all year round so your muscle memory isn't confused if you need to defend yourself in December right after you switch to your bigger gun.

Why the need for muscle memory? We've gone over this pretty far in depth, here, so I won't beat this topic up. But, if you're short on time, I can say this: When you're presented with a life and death situation, certain body parts of yours aren't going to work right. You're going to get tunnel vision. You finger dexterity will be limited. Your breathing and heart rate will increase. You're going to want to have as much on your side as possible, and the last thing you need to do is have to think: “what do I do next?”

It does happen. If you're used to carrying your full size pistol, and switch to your pocket pistol, are you going to have the brain power to remember that you switched? Or, is your muscle memory for the wrong gun going to kick in? It could happen. Stack as many positives on your side as possible. Carry the same gun all year round until your proficiency with firearms is where it needs to be, then changing your concealed carry rig won't be that big of a deal.

Train safe, train smart, and train often with your chosen self-defense firearm, and keep your head on a swivel.

7 Responses to Winter Is Coming, So Break Out The Big Guns! Or, Not …