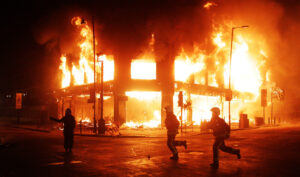 This is a stock photo from another incident. Not a recent riot.

Certain cities within the United States are an absolute mess right now with little to no coverage of the incidents taking place. This is going to be a bit of a different article than you're used to reading of mine because I'm offering up some advice based on my opinions and things that I'm seeing.

I study this stuff, probably more than the average American does, just because I have to know it so I can effectively communicate things to you, our readers. So what's the deal? What's going on?

I'm sure you've heard of the mass rioting taking place. And most recently in Kenosha, Wisconsin things are melting down, quite literally because of fires right in the streets. Here's the thing about Kenosha, many people haven't even heard of it. And, those who have probably didn't know it was even in Wisconsin.

The Kenosha population was just over 100,000 people in 2018 making it a medium sized city. When a person thinks about violent crime, this is not the city that usually comes to mind like NYC, LA, Chicago, Baltimore, etc.

Kenosha sits almost smack dab in the middle of Milwaukee and Chicago and you've got a 1 in 295 chance of becoming a victim of a violent crime there.

Unless, of course, there are riots taking place. If that's the case, then your chances go up quite considerably.

The last few nights, for example, you had a good chance of getting hurt if you were there.

I had a bunch of videos I was going to embed, but they go against our family friendly guidelines for language and gore. Simply go to Twitter and search for “Kenosha riots” and you'll get a lot of wretched stuff to watch uploaded by citizens, not necessarily the news media.

So what's the point with all of this?

Well, there are a couple of points.

The first one is gun related and much easier to discuss, so I'll start there. If you're not armed all the time, to include inside your house, you are wrong.

Fix this immediately because you never know when bad stuff is going to happen. We are currently in a huge mess as a nation and I don't see it getting better any time soon. And in fact, I think there's going to be violence no matter what the outcome is in November.

But because I'm probably not wrong, I strongly suggest you not only have your gun, but also medical equipment. I saw another disturbing video of a dude who was shot in the upper arm in a recent riot and it's a bloody mess.

That is one of the reasons why trauma gear is so important. I don't know that guy, but I can say with about a 93.7 percent certainty that he didn't wake up thinking he was going to get shot. That sort of stuff just kind of happens.

We recommend this company for trauma gear.

The other point, which is a bit of a different topic for me on this blog, though I do say this out loud to my friends, is that you need to move out of your city if at all possible. On the bare minimum, stay OUT of your city.

If you live in or near a city with a population greater than 15,000 people you should move out of there ASAP.

If you have the means, of course.

Because here's the thing … I started this article saying that certain cities are a mess but the truth is that ANY city can be that mess. Any city is susceptible to this mass rioting, and the rioters don't seem to care about anything except their riot.

They don't care who or what they damage along the way.

I think there is value in weighing the benefits of getting out of your city now while you're able to. And if you cannot get out because of familial, monetary, or other constraints, avoidance is the next best thing.

This means that if stuff is popping off in your local city that you don't go there to watch it. This also means not going out to places, or at least limiting the amount of time you spend out at places. Does that suck? Yeah, sure. But you have a zero percent chance of getting caught up in a riot if you're not there.

Last month my local medium-sized city (92,000 people) was on the verge of meltdown. It's about 45 minutes away and we never went close to it. Where I live is less than 10,000 people but it's spread out over a large area and is very safe because most of us are armed.

But we weren't always this blessed. We moved down here from Pennsylvania in a very populated area north of Philly and I wanted to get to a better area just because people can be unpredictable.

It's almost always better to be in an area with less people who are willing to help take care of each other than in a big city where the goal is to hurt others.

Let me know your thoughts on this in the comments below. Would you or have you already considered moving?

31 Responses to Still Getting Worse — How Far Can It Go?