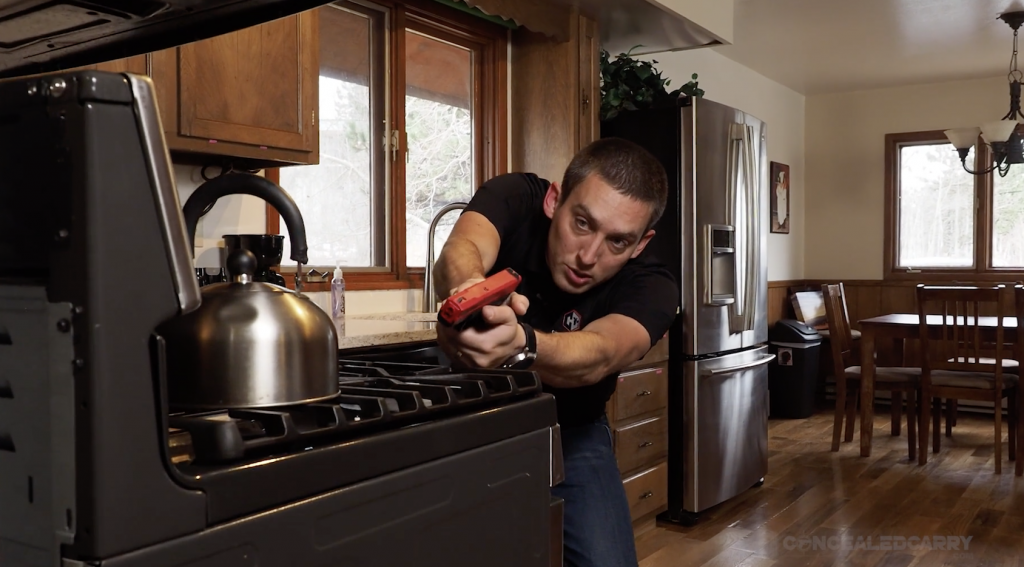 Whenever I tell someone that I carry a gun while in my house it's usually followed by strange looks and accompanied by a statement that resembles one of these: “What, are you afraid to be in your own home or something?” Or, “man, it must really suck to be so afraid of the world that you need to carry a gun in your home.” Or, “dude is your neighborhood that dangerous that you need to carry a weapon on you even in your own home?”

We'll get to the answers to those arguments in a moment, but first, should you carry a gun in your house?

Well, yes it's a good idea to be armed even in your home, and the reason why is because you just never know if someone will break into your home while you're there. It doesn't matter what type of area you live in, crime can happen anywhere. Most people live within driving distance to some medium sized city that can be a hub of sorts for one of the major cities in our country.

Criminals can and often do travel to suburban and rural areas looking for fresh meat.

If that fresh meat is your house it's better to be able to defend your castle than not. (That link, by the way, goes to our course about home defense that's highly recommended.)

I obviously believe that it's in your best interest to carry your gun at home, or I wouldn't be doing it myself. I would never recommend you do or buy something that I wouldn't be willing to do or buy myself.

Do I carry my gun in my house (or ever) because I'm afraid?

To be honest, no. I don't carry a gun at home because I'm afraid, though if I were to be completely honest with you that's how it all started.

About 10 years ago an incident occurred in my old neighborhood where we rented a house. We shared a wall with some people who seemed nice, but were actually housing a snitch for a very prominent and well-known national gang.

Once the gang found out this dude snitched on them and brought the police and FBI raid at their HQ, things changed. Our quiet little neighborhood went from peaceful to groups of leftover gang members banging on their door with shovels.

Shovels. Like, the kind you dig a grave with. They were beating on his door, sometimes waking us in the middle of the night. One night, we woke up only to look out the window to see one of these upstanding citizens smashing their car with these shovels.

The police came and told us to not hang out in the front yard anymore because they were concerned about a drive by shooting. The FBI parked a car at the end of the road with cameras positioned in it to point down the street so they could see any bad guys coming and leaving.

I'm not gonna lie, and am being totally honest with you here. I was scared. I wasn't scared for me, but for my loved ones.

The only gun I owned was my single shot 12 gauge given to me for a birthday present when I was a kid that was kept in pieces in a storage bin because she didn't want it in the house.

Once we realized what was happening, I went and bought my first handgun, got my PA carry license, and the rest is history.

So, originally, I bought a gun and carried it around my house because I was afraid. I was afraid that the bad guys would kick down the wrong door, since our two houses were technically in the same building and our front doors were just feet apart.

I was afraid. I was fearful that I wouldn't be able to protect my family — so I went out and bought an XD9 that I still have but haven't shot in years. But, carrying a gun, anywhere, while you're afraid isn't a good idea.

In fact, I think to carry a gun while afraid can be dangerous. Fear is a very strong emotion that can really jack your senses up and cause you to be stupid. So, if you start a defensive scenario and you're already fearful of something, you'll lose control of your fine motor skills faster than you would if you were starting with a calm, cool head.

What about my neighborhood, though? It must be dangerous if I feel the need to carry a gun even in my own home. Right?

Seriously, my current NC neighborhood is very safe. Our crime rate consists of speeding tickets and red light runs. In fact, my neighborhood is unincorporated and only patrolled by the Sheriff and an occasional statey that may be running through.

Most of us also carry guns which helps tremendously because everyone of us is kept polite. But, we are only an hour away from Asheville with a population around 100,000 people (and less than 3 hours from Charlotte with over 1 million), and I'd be a lunatic to think that crime wouldn't travel. So, I carry a gun at home.

And, my old Pennsyltucky neighborhood was also pretty safe. Sure, there were a lot of meth houses, but that was pretty much it. The town was less than 10,000 people and we lived on a cul-de-sac.

The gang traveled from a medium-sized city that was nearby.

And that's really the key. Crime can travel. And because bad guys can travel and sometimes look for a new place to rob, I carry a gun at home and always recommend you do, as well.

It doesn't matter where you live. Crime can be anywhere.

The next step for you is to seriously figure out how to go about home defense, and that's where the above linked course comes into play. Here's the link again for you to check out.

Do you carry a gun in your own house? Let us know in the comments below.

Episode 393: Justified or Not Justified. You Decide
States Blocking “Self-Defense Insurance” And What To Do About It

16 Responses to Should I Carry My Gun In My House?