I just watched a video on Reddit that showed an elderly man walking through a parking lot, and he was open carrying his everyday carry (EDC) handgun. The one who posted the video asked:

I watched this guy struggle for over a minute trying to step down off a curb. If you have balance issues, maybe open carry isn't a responsible choice.

It's a legitimate question, not just for open carry, but for carrying a handgun in general. So here are some things to consider.

Why carry a handgun —

Why do we carry a handgun? The simple answer is for self-defense. We know the probability of needing to use an EDC gun is low, but because of the stakes, we would rather “have it and not need it than need it and not have it.”

If we carry a firearm to defend life, it's fair to assess if it allows us to do that or if carrying the gun is more of a liability because of our physical condition.

The gun may be a liability —

The man in the video is clearly struggling to keep his balance as he walks through a parking lot. I don't know anything about the man other than what we see in the video. However, it seems that the man may not be able to physically defend against someone who wanted to take his firearm. That is a problem.

It isn’t totally clear, but the firearm doesn’t look like it fits the holster quite right, but I digress.

Some violent criminals consider open carry a challenge and opportunity to get a free gun. Once the dirtbag has the gun, everyone is less safe, especially the person who lost the gun. So is the gun more of a liability? Possibly, even more so when carried openly. 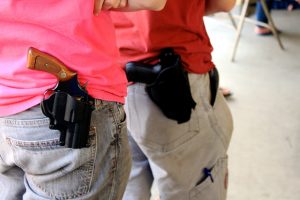 I've held the same opinion on the topic for years, that open carry should be a right, but that doesn't make it the right choice. But carrying concealed doesn't mean we don't need the ability to retain possession of our gun in a fight. And carrying concealed creates one additional hurdle, accessing the gun.

It's easier to draw a gun when you don't need to clear layers of clothing first. Could it be the man in the video considered that he couldn't draw from concealment, so he decided to carry openly? If this is the case, it begs us to ask the question once again:

Is the gun more of a liability than an asset?

This challenge doesn't just apply to the elderly. Consider if you've had an injury that puts your primary hand in a cast? Do you feel comfortable swapping to a support-hand holster and carrying it that way? Can you skillfully defend or draw the gun in that condition? Maybe you can, but more goes into that decision than practicing firing with your off-hand on the range.

Each person must assess their abilities and determine the answer to that question.

This is just one video of a recent gun disarm. I don't think the person in this video was carrying the gun openly, rather I think it just was visible when her jacket rode up. Once the bad guy had the gun, he could have used it against anyone. It's something to consider.

The other side of the argument —

You're not wrong to say, wait, doesn't it make sense that the most vulnerable have a tool like a handgun to even the odds? After all, the man in the video likely can't protect against a thug's physical attack, and a gun may be his only option. 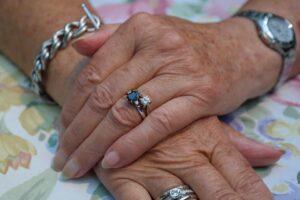 Deciding when the drawback of carrying outweighs the benefits is a subject that requires an individual assessment. Provided the person has mental clarity, they should be the one who makes that decision.

If you have a loved one facing this decision, help them consider these points in this post in case they never thought about them. Here are just some considerations:

In no way am I suggesting that only physically solid and exceptionally-trained people should carry guns. Instead, I hope that those who carry a firearm consider and weigh all that comes with carrying that tool.

I also pray that seeing the man in the video will cause us to assess how we treat the most vulnerable people around us. Finally, if I live to be as old as the man in the video, I hope that someone younger, stronger, and with a Godly heart takes the time to help me when I can no longer.

Let's be a group of people who don't just carry guns for self-defense, but people help those who can't help themselves.

If you like this content, consider subscribing to the Concealed Carry Podcast. We discuss the 2nd Amendment, training, legal, and self-defense issues facing the ethical concealed carrier. 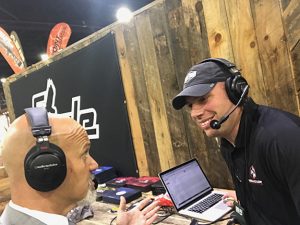 23 Responses to When Does Carrying a Handgun, Turn into a Liability?