Join Our Newsletter
Shop Our Store
MAIN MENUMAIN MENU
By Joshua Gillem on November 23, 2020 in Gear 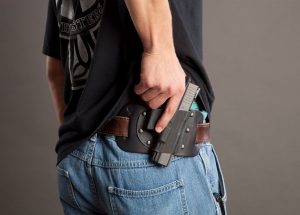 Most folks opt to carry their guns hidden under the concealment of their clothing, which is also my main method of carrying. This means that you're walking past hundreds of people every single day who may be carrying a gun that you don't know about.

Not all people carry this way though, because some opt for a more open approach to carrying their firearms. This article is meant to tackle some of the benefits of each mode of carry, as well as some of the negatives.

The goal is not to tell you which method is best, because that's up to you. The goal is to educate the newcomers. At the end of the day, I stand up for your right to carry a gun, period. The way you carry is on you and I hope this is something we can all agree on.

Concealed carry is for those who like to keep the fact that they have a gun for self-defense hidden. While it may take a moment longer to get the gun out (depending largely on where the gun is) those who carry concealed believe there is a tactical advantage that is held until the very last moment when the firearm is actually needed for defense.

Carrying a concealed gun also gives the wearer more options to carry, in regards to where the gun can be carried. Popular methods range from appendix carry (which is the front of your body right by were your zipper and button would be), all the way around to the small of your back (which is my least-recommended method of carry).

Personally, I tend to carry right on my strong side hip, or just behind it. Everyone is different, however.

Generally speaking, carrying a concealed gun, either inside the waistband or outside, is a little slower because there is the extra step of moving the outer garment of clothing out of the way before you can get the gun. This is a give and take. Concealed carriers give up a little speed for the benefit of hiding their gun better.

Sadly, however, many concealed carriers don't really conceal their firearms all that well as certain positions and movements give away the fact that you're carrying.

Matthew covers this more in detail in our article, here. 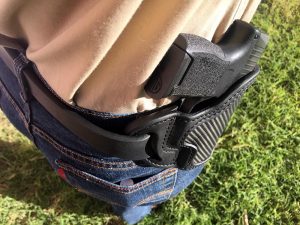 Those who carry a firearm openly for the world to see usually do so as a pro-gun statement (though not everyone does this). That statement is sometimes meant to help de-sensitize people to the sight of a firearm, or to just say that the wearer is pro Second Amendment.

Certainly when I have carried open in the past it was as a statement, and one that I no longer make as concealed carry is my primary mode these days.

Another popular reason for open carry is because those who do it this way tend to believe that a bad guy is less likely to commit a crime if he knows there are armed citizens around.

There may be some truth to this, but there are also those who believe it makes open carriers a bigger target. The thought here, right or wrong, is that the bad guy will target you first because he can see that you're armed.

For those of us who carry a gun on their hip, open carry usually allows for a faster draw because the outer garment of clothing is already out of the way thus eliminating some of the steps for drawing the gun and making it faster.

It is usually recommended for open carriers to use some sort of active retention holster to prevent a potential bad guy from stealing the gun, as has happened in rare occurrences before.

And as with concealed carry, there is some give and take. Here, you have the speed of an open carry draw, but give up concealability.

Finally, some people do what I call a hybrid approach. The gun isn't completely concealed, nor is it completely open. Instead, people who utilize this method will wear an over garment like a vest or jacket that can be easily moved out of the way.

From the front, someone may be able to easily see that you're carrying. From the back, not so much. Of course, some say that carrying with a vest like this, like the ones we sell in our online store, is suspicious looking unless you travel back in time.

Sometimes I like to carry in an OWB holster on my hip, with an untucked shirt. It's still concealed, but I'm not really trying to conceal it by getting it as close to my body as possible. This allows a me to get a good grip on the gun, faster.

No matter how you carry or plan to carry, the only thing that really matters is that you are taking your personal safety seriously and are training with your carry gun.

Which method have you chosen for your everyday carry? Let us know in the comments below, as well as why you chose this method. 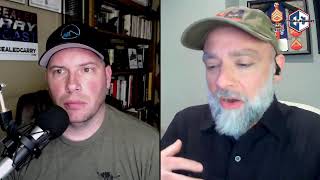 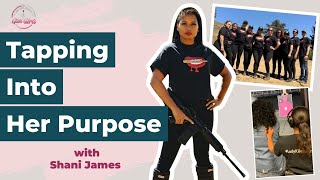 35:27
Tapping into Her Purpose with Shani James
3 views