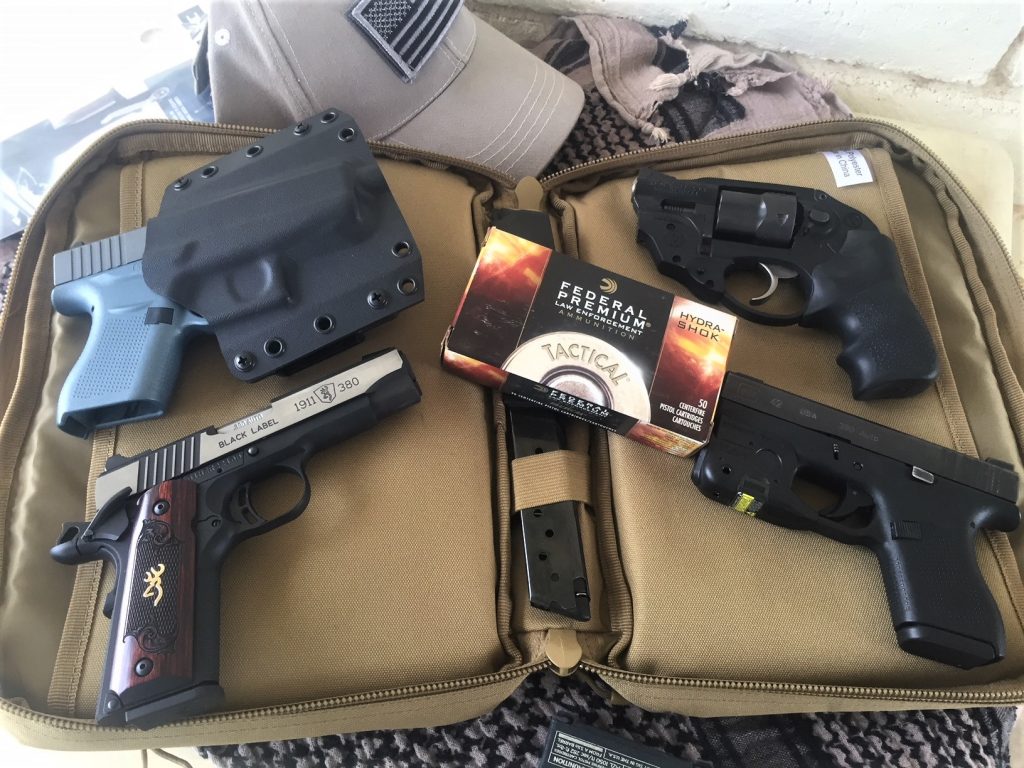 The industry keeps cranking out new and better choices of handguns. What’s your pick? Pistol case sponsored by Exos Gear.

What makes a good concealment gun?

Boxers or briefs? Bikini or thong? There are more types of handguns than underwear, and everyone seems to have an opinion about what’s best. Here, we’ll look at what makes a gun a good candidate for personal security and everyday carry, in that order. As examples, I’ve included some tales from my own journey as a concealed carrier.

The handgun of your choice must go “bang” when you press the trigger and it’s loaded with your EDC ammunition. Yes, those are two qualifiers. Some guns function with total reliability with some types or brands of ammo but not others.

While it may be painful, financially and physically, to shoot a full box of whatever hollow point ammunition you carry for EDC, you deserve to not have any concerns about ammo-related malfunctions in a critical moment.

One of my EDC guns, a Glock 42, is a brand renowned for reliability. But there’s one brand, let’s call it Brand X, of FMJ ammunition it won’t cycle. A friend who has the same model pistol says his won’t fire Brand Y, but Brand X runs fine. The moral of the story is, test your gun with your ammunition and know if it cycles reliably. I keep a supply of Brand X on hand because it makes for great malfunction-clearing practice!

Even if it’s as reliable as a Swiss watch, if your handgun has safety or other features on it that interfere with you getting it into and keeping it in action, you can waste precious time in an attack that, statistically, is likely to last less than five seconds.

Some years ago, I took my first class, the revered Pistol 250, at Gunsite Academy. Having read up on the legacy of founder, Col. Jeff Cooper, I bought a full-size 1911 prior to the class. I got there to find most of the instructors packing Glocks, but that’s not the point. After a week of firing that pistol daily, to the tune of around 2,750 rounds, I went to a USPSA match feeling quite confident. The competition went smoothly and I was enjoying my new-found speed, until, in stage 4, my trigger wouldn’t work. I pressed, pressed, pressed again.

Taking a breath and a look, I realized I’d neglected to defeat the thumb safety.

This was a convincing moment for me that the advice I’d heard from another instructor was golden: stress will eliminate some of your skill, so keep your ballistic tools simple.

There are some folks who derive great peace of mind from a mechanical safety that requires intentional action to defeat. I get it. Just understand that this feature demands more practice from you to make manipulating it a necessary part of your routine between the draw and establishing sight picture.

Even passive safety devices can cause firing delays. Many shooters, myself included, have experienced a failure to fire because the meat of the firing hand palm, even when gripping the pistol correctly, fails to fully depress the grip safety. For most people, this isn’t a problem, but for those of us with hollow-ish hands, it’s a big one.

It’s not only so-called safety features that can get in the way of effective self-protection. Most concealment guns are small, and when loaded with higher-pressure ammo which a lot of defensive loads are, recoil can be substantial. Assuming you’re using a grip and stance that maximize recoil resistance, if recoil causes so much pain to an old injury or if for some other reason your strength is compromised during multiple-shot sequences, it may be time to change guns.

I’ve heard from a lot of folks who think adrenaline will carry them through any shortcomings their physical self brings to the game, so they don’t bother practicing. A historical examination of defensive encounters reveals this important fact: you’ll likely do in combat what you’ve done in training. It just makes sense to have a handgun that you can shoot without pain or other trouble.

3. Comfort of wear and draw 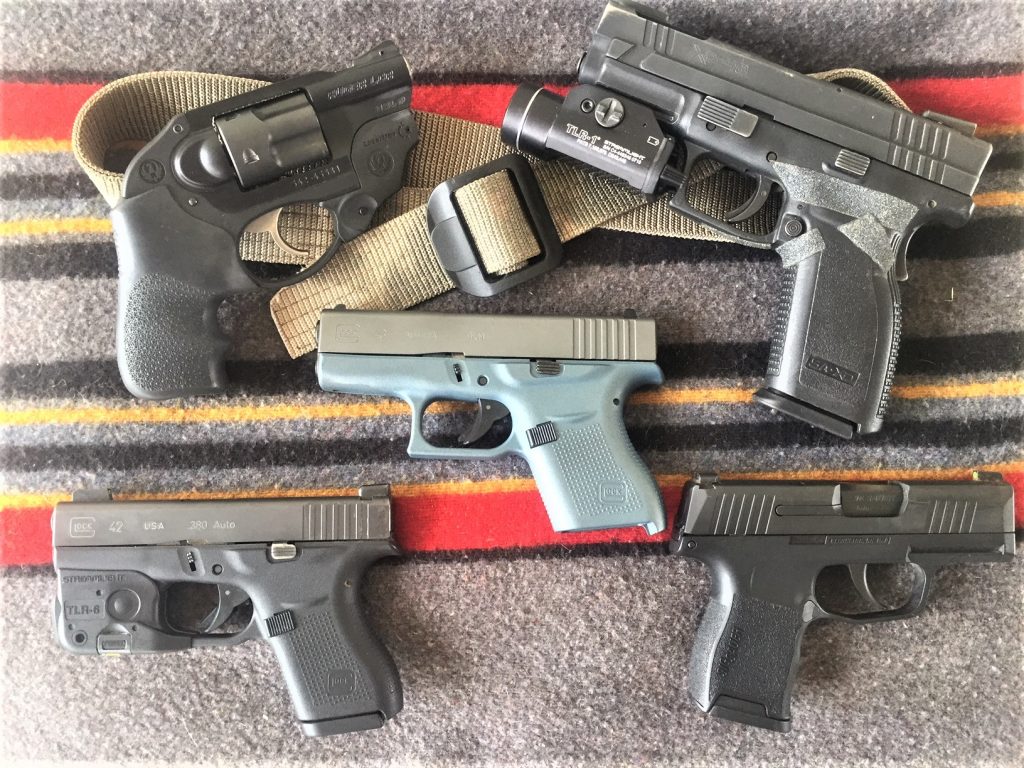 Some of the guns the author has carried over the years. Each worked or does work well; each requires specific adjustments to wardrobe or habits. ATACS belt sponsored by Propper.

In order to defend yourself with a gun, it must be with you—not in your car, dresser drawer, or gun safe. No matter how great your firearm of choice is, if it’s not comfortable to wear, you’ll leave it behind.

Lots of concealment guns are made with snag-resistant features to facilitate drawing. Some have flattened profiles for ease of concealment. These may not always be the coolest-looking guns. Black and other boring colors are easiest to conceal. Self-protection isn’t a popularity contest. Some guns may fill both bills. If the admiration of material things is more important to you than prevailing a gunfight, that’s up to you, just realize that this is a choice you may have to make.

Things like “brand” and “caliber” aren’t listed here. There are a plethora of worthy choices. Your selection of a firearm for daily carry will probably evolve over time, as your skills hopefully improve and as the industry turns out better choices almost every year.

There’s something to be said for price, availability, and performance of certain calibers, but at day’s end, shot placement beats all. It’s been my experience that those motivated enough to choose a less-available or more expensive load are going to do so regardless of what’s popular, and in general, such folks work harder to prove the value of their choice. We live in a great era when so many choices are available.

As for me, I’m on my sixth primary gun in more than 14 years of licensed carry plus carry during the pre-licensing era. The caliber and size of my EDC guns has evolved substantially along with my shooting skills and changes in the market. Good luck to you in selecting your first, or next, favorite!

What do you look for in a concealed carry gun? Let us know in the comments.