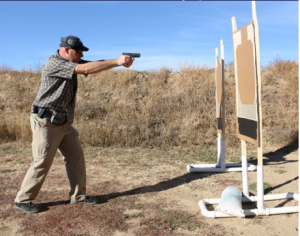 There are a few topics that can really get people heated and cause arguments. One of those topics is if it's a good idea to fire warning shots, and another is if you should carry with a round in the chamber or not. Just so we're absolutely clear we take the stance that warning shots are bad and carrying with a round in the chamber is a necessity for proper self-defense.

You may have to work yourself up to carrying with a round in the chamber, but you should strive to get to that point sooner, rather than later.

Another topic that sends a conversation into a downward spiral is the whole shooting center mass vs shooting arms and legs thing, also known as “shooting to wound.”

I want to make our position on this very clear before I proceed because we catch a lot of heat in comment sections of articles and Facebook groups just because people don't read entire articles.

We don't recommend that you shoot to wound.

We also don't recommend that you shoot to kill.

We recommend that you shoot to stop a threat by shooting the center mass of the bad guy. Your intentions should not be to kill that attacker, but to stop them from killing you. If that person dies as a result of you needing to defend yourself then it is their fault.

They valued their own life over yours when they decided to attack you.

It is never my goal to kill someone. Ever. It is my goal to protect my family and myself from death and if that person dies as a result then so be it.

People often misunderstand what we mean when we say “don't shoot to kill, shoot to stop a threat” and think we mean shoot to wound. We do NOT condone shooting to wound. There are just too many problems with the thought of “I'll just shoot him in the leg.”

Now, shooting to wound, also known as a leg or arm shot, is a mistake for a few different reasons.

First, to a court, it could show your jury of peers that you had reason enough to not use deadly force to stop an attack, even if the act of retrieving your gun can be seen as deadly force based on its own merit.

If they come to the conclusion that you didn't think you were justified by the reasonable person standard to use deadly force when you pulled the trigger, you could be in for a world of legal trouble just because you reasoned with yourself that you're not willing to shoot center mass.

Why do we say shoot to stop a threat, not to kill?

Besides the moral component of having the desire to kill someone, there are legal issues you must think about. Instead of appealing to your morals, because everyone has a different set they're working with, we'll go into the other part.

If you're running around saying “I'd shoot to kill” all over the internet, there is a digital trail you're leaving behind you that incriminates you and makes you look like you wanted to kill someone and were looking for the opportunity. We're living in an increasingly digital world and the digital trails we leave behind will only become more prominent as we get further down the digital hole.

It doesn't matter if you have your privacy settings maxed out, these tech companies seem to be largely anti-gun owner in practice and would likely jump to help make you look guilty.

Another problem with shooting to wound, is that an arm or leg is a much smaller, harder to hit target. This world we live in dictates that we're responsible for every round of ammunition that leaves our barrel. Chances are excellent that if you aim for a leg or arm that you'll miss.

This is amplified if your target is moving. Hitting a moving target isn't as easy as a static target you're shooting at on the range. If you miss your target and that bullet hits someone else who is innocent you've just opened up a whole new can of worms.

Also, arms and legs tend to be thinner than a torso, which can allow even the best expanding hollow points to pass entirely through an extremity and into another person.

You may also waste a round of ammo. And, to be honest, this is something that many people don't think about. If you decide to shoot that person in the arm or leg how do you know it will stop that person? They may not care if they're on drugs and you may make them even angrier.

If that person keeps coming, all you've done is upset that person and wasted ammo. Yeah, maybe they're hurt, but then again maybe they're not. The only way to completely mitigate this is to aim center mass and stop the attack.

And, remember, you're targeting a smaller area like an arm or leg that moves out of tandem with the rest of the body and is therefore much easier to miss. You may not even hit that person with the first shot wasting a round that way.

There are just so many reasons why shooting to wound is bad. There are other reasons why, but these are the main ones. Please leave your thoughts and comments on this topic in the comments below.

Now, I'm not a lawyer and nothing I say should ever be taken as legal advice. I've just been around the industry for a little while now and have spoken to attorneys who say stuff like this. I'm just paraphrasing what I've heard, but you should definitely talk to your own lawyer for advice.

Picking up a copy of The Law Of Self Defense can't hurt either.

Episode 428: Path to Performance With a Red Dot Pistol – Scott Jedlinski
Guns, Ammo Still Scarce And The Effect It Can Have On Your Training

31 Responses to And I Repeat, Shooting Arms and Legs Is Bad … Mmmkay?