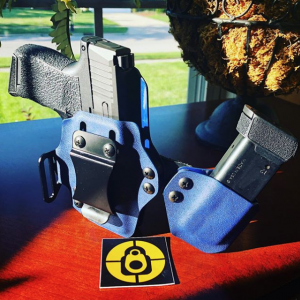 This DualPoint holster with added mag pouch is so comfortable and conceals my P365 like a champ.

What would drive me to do a holster review, after I have done like 30 in the past? Well, this holster rocks. That's why.

The DualPoint holster is a hard-sided, Kydex holster that conceals and works just wonderfully in the appendix position, inside the waistband (AIWB) or strong-side hip, outside the waistband (OWB). If you carry a spare mag, you can purchase the ‘plus pouch' which is a Kydex magazine carrier that attaches to the holster with a small piece of leather.

The whole configuration comes standard with a single, 1.5″ steel belt clip, but dual soft loops are an option. In a truly great design, the hardware that allows for the holster to be worn OWB also serves as a concealment claw that pushes the butt of the gun in toward the body to aid in concealment.

Blackpoint Tactical (BPT) is a holster company located down in Georgia. If you want a run of the mill, Kydex holster for your gun, it's best to look elsewhere. BPT's holster designs are pretty innovative, in-fact they have a chest-rig system that I have not seen anywhere else. They do have quick-ship availability for some of their holster models.

However, BPT custom makes every order so, unfortunately, the lead time is between 4-6 weeks from time of order. I can confirm this, as mine took about one month exactly from the time of order until it was in my hands. I think Amazon's 2-day shipping has spoiled us and we all expect to get things in 2 or 3 days. It was definitely hard to wait that long, but I have to tell you, it was worth the wait. 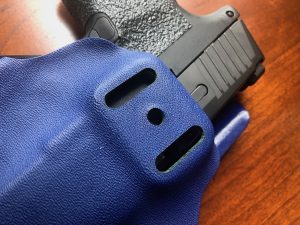 Adjustability is important for comfort, especially in the appendix position. The DualPoint provides all you need, even if you're like me and like your gun to ride pretty high.

Their prices are on the higher end compared to other Kydex holsters, however, when you factor in its quality and versatility, you get your money's worth. The DualPoint also comes in a light-bearing model, and you can choose what type of IWB and OWB belt clips you want as well as the shell's color.

Black Point Tactical is proud of the fact that all their gear is made 100% here in the states, as they should be.

I purchased mine in Police blue with a single, metal 1.5″ clip for AIWB and two 1.5″ metal strut loops for OWB. You can order two soft loops for AIWB, which I prefer, but since I have a bunch already, I wanted to review it with both the clip and soft loops. I also purchased the plus pouch add-on. 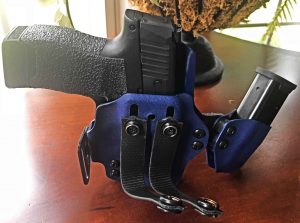 I prefer soft loops on my holsters, so I opted to use these loops instead of the single belt clip. You can also see here how the strut loop acts as a concealment claw when used in the AIWB configuration.

I carry AIWB nearly exclusively, and that is how it came from the company. In this configuration, the single belt clip is used to secure the holster to your belt and is set up with a zero-degree cant. One of the metal strut loops is attached in a reverse position, causing it to perform just like a concealment claw. It looks different than what one may expect, but it works wonderfully. The other strut loop is not used in the AIWB configuration.

The plus pouch attaches to the main holster by use of a piece of leather. The leather screws to both the holster and mag pouch to create a flexible union. This allows the mag pouch to flex and move when you move, making it so much more comfortable than similar holsters that combine both parts in one solid design. This also allows the removal of the holster pouch so you can carry just the gun. And I should mention the Kydex is thick, well refined, and formed perfectly around the gun. 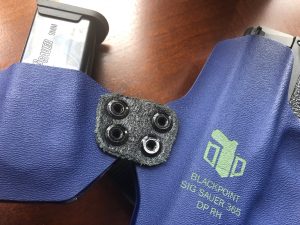 The leather used to join the magazine and gun holsters together allow the holster to flex and wrap around your body more comfortably. 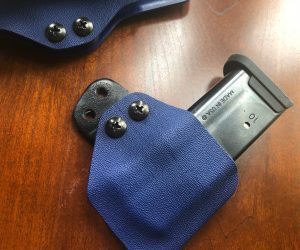 The plus mag pouch is an optional upgrade with the holster. You can easily take it off if you don't want to carry an extra mag or when you are converting it to an OWB holster.

It's simple to switch it over to OWB. You have to remove the plus-pouch, and, in its place, attach one of the metal strut loops. The other strut loop that was acting as the concealment wing is flipped over. In the OWB configuration, the holster is worn on the strong side hip. 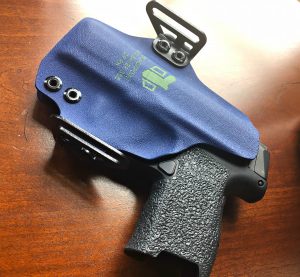 In the OWB configuration, the strut loops are flipped in the opposite direction.

As noted above, this is how I carry nearly all the time, so I have worn a multitude of different holsters. I found the holster to be quite comfortable and the addition of the concealment claw, makes it disappear. The addition of the plus pouch adds a little bit of size, but in the appendix position, this is not an issue at all.

Comfort is not compromised when adding the mag pouch because it can move and twist independently from the holster. I was thankful for the generous ride-height adjustment notches. Most holsters allow for some cant, but not so much for ride height. I prefer my holster to ride higher than probably most people. So the adjustment holes allowed me to set it up perfectly for a clean draw that does not get compromised by dropping the gun too low and into my waistband. 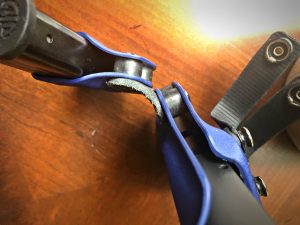 The holster's ability to flex makes all the difference in the appendix position.

I initially used the holster with the single belt clip. Like every other holster using a single clip, after some time, I find the holster can pivot. This causes either the magazine side or the gun butt side to be higher or lower than where it originally was. This is why over time I have become such a big proponent for soft loops, and when possible dual loops.

I switched out the single clip for two soft loops that I already had. This made all the difference in the world as far as how firmly the holster attaches to the belt. Using two soft loops does not allow for that pivoting or any other movement for that matter.

No matter how active you are or where you attach your holster at the beginning of the day … that is where it is going to be when you go to remove your holster.

The innovative use of the metal strut loops shines in the OWB configuration as well. They are impossible to break off your belt, which is a bonus anytime you have an OWB holster regardless if you're concealing it or not. With the strut loops, the holster is held tightly against the body. And at least with my Sig P365, I can easily conceal with nothing more than a t-shirt. There isn't much adjustability for ride height or cant because the metal struts only have one mounting point.

The metal strut loops can be ordered to fit 1.5″ or 1.75″ belts. I have several 1.5″ belts, which is the size most of you likely have as well. I found that some of them were just too thick to fit through the 1.5″ slot in the strut loop. The belts were a Leather Hank's Belt, and an EDC Cobra nylon belt from Liberty Gun Belts.

I had an EDC Cobra nylon belt from Red Republic that I could fit through, but just barely. And then I have a belt from Blue Alpha Gear that fit through. And yes I confirmed with a digital caliper that my belts were indeed 1.5″ and the gap in the strut was 1.5 inches. It isn't so much the height, but the thickness that I found to be the bigger issue. 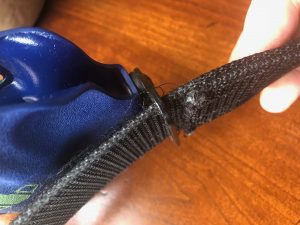 You can see here that my 1.5″ 2-ply, ridged, nylon gun-belt just won't fit through the slot on the strut loop. Switching to the 1.75″ strut loop, it worked perfectly.

So I got in touch with the guys at BPT, and they sent me out the 1.75″ strut loops right away. They told me that some 1.5″ belts just seem to fit better in the 1.75″ loops. I received them in 3 days and sure enough, all the belts fit. And, the extra quarter of an inch did not have the holster moving all around on my belt.

So if you plan on using this holster in the OWB configuration, check and see if you have a thicker than a standard belt. I would say if you have a 2-ply, rigid, 1.5″ nylon belt, or a purpose-built, thick leather gun belt, you may want to go with the 1.75″ loops.

I love this Blackpoint Tactical Holster. I use it every day in the IWB position and am so glad I got the extra mag pouch, you can never go wrong with more ammo. Practicing patience builds character and waiting a month or so may be difficult, but without a doubt worth it.

I spoke a lot about appendix carry and it being my favorite method of carrying my concealed gun. It gets a bad rap by a lot of people, for one reason or another. You can enroll in our FREE mini course on appendix carry by pushing that link, to learn more about how to do it the right way, if you're interested.