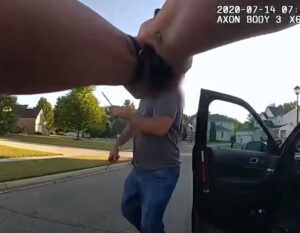 With nearly every officer in the country wearing body-worn cameras, we have an opportunity to analyze deadly-force encounters. From looking at the videos we can better understand how these violent incidents play out in real life. Because of the great amount of data, training has moved from ‘range theatrics' that had little application in real life, to developing the skills that are necessary to win dynamic street fights.

I'm pulling just 4 videos from the many we all have access to. I chose these 4 videos because they highlight a critical component of survival: Distance. The 4 videos also contain essentially the same major elements, so we can compare them one against the other. These similarities are:

The big difference is the distance between the officer and subject when the officer first makes contact with the individual, and at what point does the officer squeeze the trigger. A lot of misinformation about what the '21 foot principle' actually means has been thrown around, clouding the understanding of what is a ‘reasonable distance' to shoot a threat armed with an edged or blunt force weapon.

If you're not a Peace Officer, don't dismiss the lessons from these videos as not applicable. The takeaways from these videos are just as important to your survival, as it is to the officers who walked away from the incident. The videos of each incident are included and may be disturbing for some people, please use discretion.

Synopsis: Officers arrive to confront a male subject who carjacked a victim and is armed with a large machete. An officer chases down the subject who then turns and charges the officer at about 30 feet. The subject runs forward at the officer, as the officer back-peddles.

The officer fires several rounds when the attacker is about 9 or 10 feet away. The suspect is either unaffected or not struck by the officer's rounds. As is the case with back-peddling, the officer inevitably trips and ends up on his back. The attacker is directly over the officer in a position to bring the machete to bear on the officer. By the grace of God, other officers fired on and stopped the attacker, or this could have ended differently.

Takeaways: Backpedaling is a terrible strategy to create more than just a few feet of distance, and motivated attackers cover ground far more quickly that one would expect.

Don't overestimate your ability to get effective hits on a man-sized attacker at close distances. Even at only around 10 feet, the rounds had no effect or missed the attacker. Either way, the officer drastically underestimated his ability, along with the time and distance it would take to stop the charging attacker.

Synopsis: Officers respond and confront a suicidal suspect armed with a knife in the street in front of a residential community. The officers initially contact the subject who is around 35-45 feet away, recognize he is armed with a knife, and immediately draw firearms.

They have their firearms aimed in on the suspect as they continually plead for the subject to drop the knife. This goes on for around 2 and a half minutes as the suicidal suspect slowly approaches and the officers slowly backtrack. The officers do a good job of keeping the suspect about 30-40 feet away, but as the officers find themselves in a road, without more room to back up, the suspect closes the distance to about 25-30 feet.

The suspect charges the officer, who backpedals and fires 7 shots starting at about 18-20 feet away. The suspect is struck with at least several of the 7 rounds, yet his momentum and drive carry him within about 5 feet from the officer before he finally falls to the ground. The suspect is subdued for a few seconds, gets back up, and attacks the officer who is now transitioning to a taser.

The suspect is able to overpower the surprised officer, places him in a rear-naked choke hold, and is attempting to take the officer's handgun. The other officer, who maintained lethal force, closes the distance and shoots the subject several times who releases the officer and falls back to the ground.

Takeaways: Suicidal/homicidal people are not deterred by having guns pointed at them. Don't assume the gun will de-escalate the situation. The human body is surprisingly durable and can still fight after sustaining injuries. Handgun rounds are not powerful enough to stop someone dead in their tracks, and shot placement is critical in stopping an attacker who is motivated. Again backpedaling is no bueno.

Finally on this one, never give up the fight. When faced with a violent attacker, you may have to be violent. If the other officer would not have been there, this incident would have ended with one of the two men being shot and killed.

Los Angeles, California – April 22, 2020 Multiple Vehicle Collision, Driver of One of The Involved Vehicles is Armed With a Box Cutter

Synopsis: Officers arrive on the scene of a vehicle collision involving multiple vehicles. Officer Toni McBride makes contact with a witness on the scene who tells her that there is a man armed with a knife who is suicidal. The witness tells Toni that the man armed with the knife is the one who caused the collision and that she does not know why he wants to hurt himself.

Officer McBride draws her firearm, holds it at the low ready position.

She gives directions to bystanders who are behind the suspect and could potentially be in McBride's line of fire. McBride sees the subject about 40-50 feet away and loudly gives the command ‘stop, show me your hands man.' She backs up as the subject walks forward advancing toward her. She commands him to stop and to drop the knife several more times. The subject yells and continues to advance.

When the subject is about 25-30 feet away, she fires 2 rounds which strike the subject causing him to fall to the ground. The subject then gets up to his hands and feet, moving toward McBride. She fires four more times as the suspect falls, rolls, and appears to try to get back up, but ultimately cannot.

Takeaways: Mcbride does a great job of recognizing her backdrop and clearing out to the best of her ability any innocent bystanders. She issues easy to understand commands clearly and loudly.

She recognizes the threat for what it is, even at about 25-30 feet away. She also knows that she is standing next to the witness she just spoke with, who is inside her vehicle. McBride undoubtedly acted not just on the belief that she was at risk of death or serious bodily injury, but that the witness inside the vehicle could not exit quickly enough and was at risk.

McBride's marksmanship ability allowed her to get effective hits at a distance which initially knocked the subject down. Only after she assessed that her shots did not incapacitate him and believed he continued to pose an immediate risk of death or serious bodily harm, did she fire additional rounds.

While many deadly-force incidents occur at extremely close distances, the ability to effectively place shots on an attacker at extended distances can save your life. At the very least, it kept Toni from having to dangerously back peddle and fire like the other incidents.

Officer McBride has been cleared and is back on patrol, but she is being sued by the family of the subject she shot.

Synopsis: The officer stops a vehicle occupied by a subject suspected of stabbing an individual and fleeing the scene. The solo officer positions her vehicle about 20 feet from the suspect's vehicle. The suspect immediately exits his vehicle and walks toward the officer, clearly armed with a knife in each hand.

I haven't seen anything that confirms my assumption, but there is a possibility that the attacker caused the stoppage when he grabbed the officer's gun. Either way, it's a bad time to have a malfunction.

Takeaways: This is another example of an officer recognizing a threat, but underestimating the ability of the attacker to close the ground. While we may want to give every chance for the attacker to comply before using deadly force, we cannot allow them to cross the line where they dictate if we live or die.

While malfunctions are rare, we must be able to perform them under stress as evidenced in this video. We also must understand the limitations of semi-automatic handguns in extremely close quarters. Malfunctions can be caused by things like the slide failing to cycle completely, being pushed out of battery, ‘limp-wristing' due to a poor/hasty grip.

And again, we see that handgun rounds even at close distances do not immediately halt an attacker.

As self-defense shooters, we are naturally reactive. It is that much more important that we are aware of our surroundings so we can give ourselves the best chance at responding to a deadly attacker. Look at the '21 foot principle' and not some sort of legal rule.

Pay attention, recognize threats for what they are, and base your training on likely real-life uses of force, rather than carefully scripted, ‘what if' scenarios.

Shooting Outdoors and Cleaning Up Afterwards
I Have To Wait How Long For My Concealed Carry Permit???