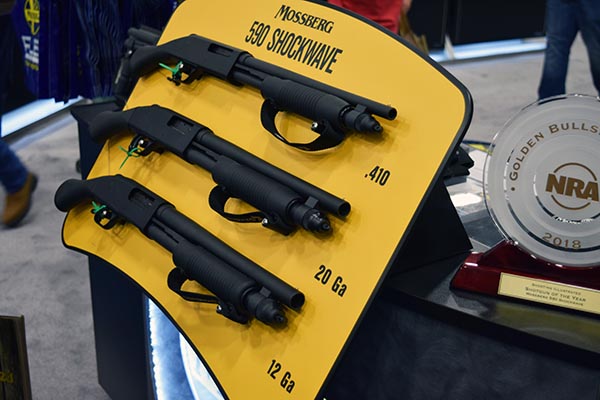 The internet is filled with truths, half truths, and zero truths. Sometimes deciphering the truth can be hard, especially if you hear something confirmed from people who are supposed to be in the know, like from your local gun store. I'm going to tackle some of the things I've heard regarding your home-defense shotgun that are false, in the hopes of being able to shed some light for some folks to make better decisions.

Something I see on the internet on a semi-regular basis is that you don't need to aim your shotgun in a home defense scenario because the spread is more than enough to make up for any misses. I've even heard similar advice given while in a local gun shop when someone was in the market for a home defense gun.

You don't need to aim this thing because it's a shotgun and the pellets spread out really wide.

While there is some truth to the fact that there is a pattern that spreads out, to say blindly that this is always the case without any other given information is entirely false. And to rely on this information as truth without testing is asinine. There is a lot that goes into it: type of shotgun, type or absence of choke tube, type of ammo being used, how far away your attacker is, length of barrel, etc.

The sad part, is that many people don't bring their shotguns to the range to see what they do, and how they handle. Many folks just trust this myth as truth and never challenge it.

Without knowing most of the things you should know (like the shotgun type, ammo, etc.) I can say with near certainty that your shotgun won't pattern in a large group given an average-sized house. In fact, I'm about 90% sure of it, because the average hallway is usually no more than 10-12 feet long. The average bedroom is no more than 12 feet. And, at 12 feet, the average Buckshot will only pattern out to a maximum of a few inches. 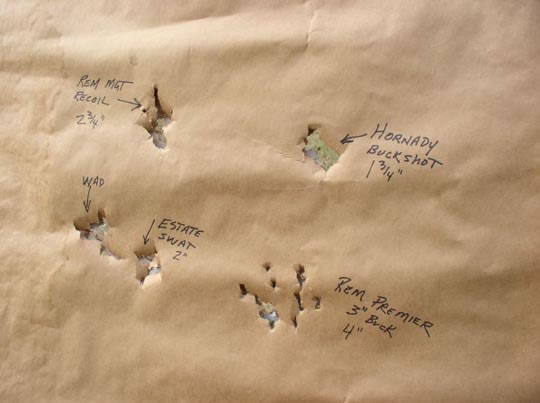 What this means is that if you're only pointing in the general direction of your attacker and not aiming, you've only got a couple inches worth of spread that could hit him/her if you are at the closer ranges where these scenarios occur. What if you miss because you weren't aiming? What if you hit them in the shoulder and they start firing back with their good arm?

There is an easy solution for this, aim.

An even better idea is to actually practice with your home defense shotgun at the range, and through your house (unloaded, of course).

Furthermore, patterning your shotgun will help you know what to expect, but to blindly accept that your shotgun will magically stop an attacker because of the spread is silly. There is only a few inches of spread (with an average gun and ammo), at the closer distances where these things happen.

This is good news, however, because 00 Buck at close distances is absolutely devastating when proper technique and aiming are taking place. And, there is totally a difference between aiming and pointing.

Another myth that I actually hear quite often, is this:

All a bad guy needs to hear in the calm of the night is the Kuh-Chuck! of a shotgun pump, and he'll run for the hills.

No joke, this is a dangerous thought. The mere idea of it suggests that you don't have a round in the chamber rendering your shotgun useless if you're startled in the middle of the night without proper brain function (i.e. you're half asleep). Will you have the wherewithal to pump the slide? Maybe you do, maybe you don't. But this suggests another truth that is also a fallacy …

… you assume that 1) your attacker is not willing to kill you for the stuff he already committed a crime to get, 2) your attacker isn't high on methamphetamine or some other controlled substance rendering his give a damn as busted, and 3) that your attacker even knows what a slide sounds like as it chambers a shell. 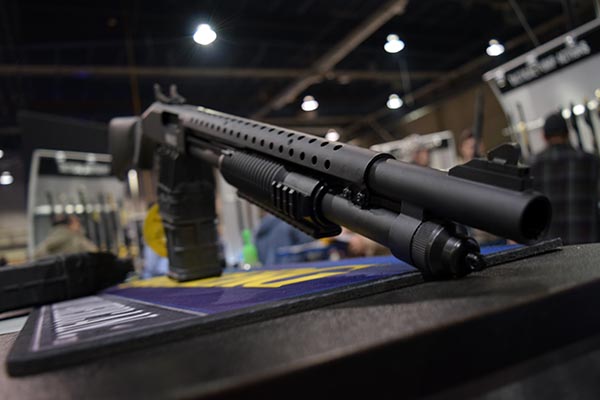 When your life is on the line, it's never safe to assume anything and you should be as prepared as possible at all times for the worst possible outcome. Let's tackle each of those sub-myths one at a time.

The easy fix for this is twofold. The first one is to keep your shotgun loaded, and ready to perform should you need it.

However, I understand that not everyone is comfortable with keeping a loaded shotgun around. So, if this is you, the suggestion here is to change your thought process behind your home defense shotgun. Instead of looking at the slide as a deterrent to crime, train yourself to be able to pump that sucker quick, under stress.

There are a lot of myths surrounding the home defense shotgun. Have you heard of any? Let us know in the comments below. Also, if you're in the mood for checking out some other myths, here is another one I wrote up not too long ago about mistakes people make with hollow point ammo.