If you have listened to the news for any amount of time, you have heard countless accounts of violent crimes that sometimes make you question the morality of the human race. Without a doubt, you have heard someone say something like, “Society is getting increasingly violent.” In fact, the media ensures that crimes involving mentally ill people using firearms to take lives are sensationalized. One would think society is in a decline, that there are “nuts” with guns and high capacity magazines are to blame. Let’s jump into reality, from which I like to spend 99.9% of my conscious life. The truth is, violent crime in America is and has been in a downward trend. According to the FBI’s Uniformed Crime Report (UCR) (2013) which records the reporting police departments statistics, “When considering 5- and 10-year trends, the 2013 estimated violent crime total was 12.3 percent below the 2009 level and 14.5 percent below the 2004 level,” (FBI UCR, 2013, p. 1). 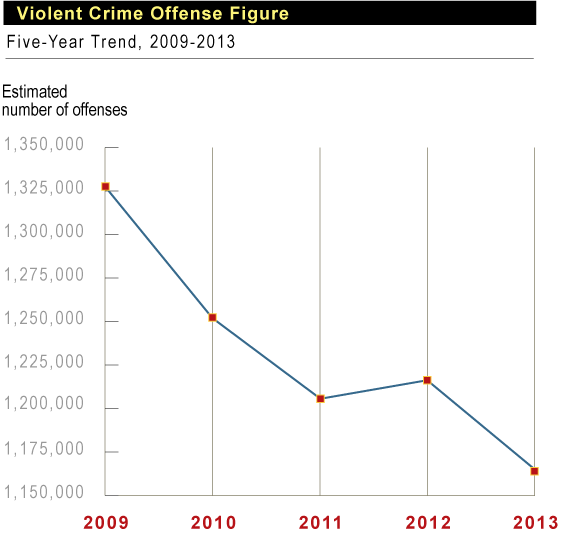 “In the FBI’s [UCR] Program, violent crime is composed of four offenses: murder and non negligent manslaughter, rape, robbery, and aggravated assault. Violent crimes are defined in the UCR Program as those offenses which involve force or threat of force” (FBI UCR, 2013, p. 1). This is a good trend and most likely due to more efficient policing strategies and technologies. Whatever the true reason, the facts speak for themselves. Violent crimes are trending downward, but how safe are we? Lets make a comparison to help clarify things. First, lets take something that millions of people partake in every day: the lottery. I live in Ohio, so I looked at the odds of winning some of the lottery games in this great state. I found that the odds of winning the Mega Millions Jackpot are 1 in 258,890,850 (Ohio Lottery, 2015). The odds of winning $1,000,000.00 are 1 in 18,492,204 (Ohio Lottery, 2015). How about a measly $50.00? Well, the odds of winning $50.00 are 1 in 10,720. If I’m lucky enough to be 1 out of 766 people, I can win $5.00 (Ohio Lottery, 2015). Not very good odds, yet people continue to fork over hard earned dollars in hopes of striking it rich.

Let’s look at the odds of becoming a victim of violent crime. Back to the FBI’s UCR for 2013. According to the report (2013), there were 1,163,146 violent crimes reported. When broken down, this is 367.9 violent crimes per 100,000 people (FBI UCR, 2013).  In other words, your odds of being a victim of what the FBI classifies as a violent crime is 1 out of 272 people. You have a better shot at being a victim of a violent crime, than winning $5.00 in the Ohio Lottery. Remember, this is only accounting for reported crimes. The rate would be much higher if it took into account the crimes that for whatever reason, are not reported by the victim. Additionally, there are no concrete statistics showing how many violent crimes have been stopped because the target/victim was armed. There are stats that try to quantify this, but they are not universally reported across the country and would not present a clear picture. For this reason, I will leave it up to the reader’s common sense in quantifying the crimes thwarted by citizens carrying a firearm.

These stats are not presented to scare you into thinking you are constantly at risk. I think I made it clear that you are safer today than you have been in the past (statistically). I present these stats to help answer the question of “Why do you carry a handgun everywhere you go?” I have been asked this by many people and I wanted to be able to give a convincing and articulate response. I am a factual person and I believe that understanding facts allows you to make your own decisions on any topic. I feel that I never have to persuade anyone to carry a firearm, if I present them with facts. They can draw their own conclusions and make their own decisions. I carry every day simply because I understand that, although violent crime is declining, it still exists. While some gamble in hopes of winning money, I refuse to gamble with my or my family’s life and safety. Being a former police officer, I understand the tremendous difficulty of the job. Police serve a vital role in keeping the peace. However, I understand the limitations an understaffed and overworked police force has in protecting the people. We must take responsibility for our own safety in whatever capacity we can. We must protect those who cannot protect themselves (elderly, children, sick, etc.). We have to understand our place in the equation, and ensure that our rights, as law abiding citizens, to protect ourselves from violent people, are not taken away. We hope that as a society, we can continue a downward trend of violence, and increase punishment for those who disregard human life and society standards. For those of us who carry firearms to protect ourselves or our family, act within law, and be of sound mind and judgement.

[Infographic] The Crimes and Disasters Most Likely to Affect You

One Response to Why The Media is Wrong About Violent Crime