Join Our Newsletter
Shop Our Store
MAIN MENUMAIN MENU
By Matthew Maruster on May 1, 2018 in Firearms Ownership, Gear, Safety, Training 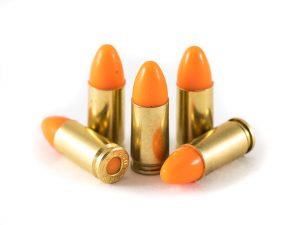 These Snap Caps from Newbold Targets are an inexpensive, invaluable tool.

Perhaps one of the simplest and most versatile training tools that firearm instructors can use are dummy rounds or Snap Caps. But they have a far more reaching purpose than just in the hands of an instructor.

First, for all the wordsmith sticklers out there, let's get to it. Yes there is a difference between Snap Cap and a dummy round, and here it is:

I will use the terms interchangeably moving forward as their uses are the same. 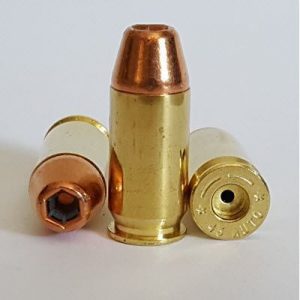 If you know what you are doing, you can make dummy rounds from real cartridges, by removing the primer and powder charge.

Why Use Dummy Rounds?

Unless you are a sponsored shooter, who spends all day on the range flanked by boxes and boxes of ammo, you probably don't get to the range enough. I know, because I am as guilty as the next person. So what do we do? We do some dry fire practice. It is probably the single most important thing you can do to improve your shooting skills. In fact, if you are dryfiring 4 or 5 times as much as live fire, you're doing it right.

Have you heard that dry-firing your gun will destroy it? I have, and it's (for the most part) completely untrue. First, refer to your firearm owner's manual, but as a general rule: rimfire firearms, .22LR should not be fired without a cartridge in place. And if you own an antique or rare firearm, maybe dry firing is not the best way to go. Absent one of those reasons, it's going to be just fine. But just for peace of mind, using a snap cap will protect your firing pin by giving it something to strike. 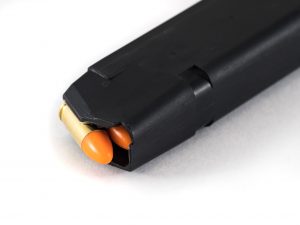 Dummy Rounds are a great tool even when away from the range.

Additionally using a magazine filled with dummy rounds more closely replicates the weight of your loaded firearm for more realistic practice. And dummy rounds in the magazine keep the slide from locking to the rear while you practice clearing stoppages and performing magazine reloads.

While it is somewhat of a ‘lost art', quickly reloading a revolver with speedloaders is a skill set that can be mastered. Dummy rounds can be used with the speedloader to learn and practice lightning fast reloads with your revolver.

Even if you are not a garage gunsmith, you are likely regularly taking your firearm apart to clean and inspect it. Do you perform a functions check on your firearm after reassembly? You should, especially if it is your everyday carry (ECD) gun. Check that the gun cycles correctly and rounds are being fed, by using a magazine filled with dummy rounds. 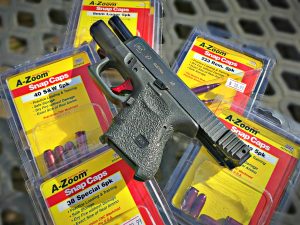 Snap Caps are a great tool to identify recoil anticipation.

Snap Caps are just as useful on the range as they are off the range. Randomly placing Snap Caps in the magazine along with live cartridges, will produce a stoppage each time the dummy round is chambered. Now the shooter must clear the stoppage and get the gun running again.

Anticipation was a popular Carly Simon song in the 70's, but it sucks when it happens on the range. You can identify and overcome anticipation by using dummy rounds during live-fire. Anticipation will be very obvious when the shooter pushes the muzzle of the gun down, as they prepare for the recoil that never comes.

For those who have never held a gun or loaded a magazine, dummy rounds are a great tool for safely learning the process. Using live ammunition to teach a new shooter how to load, chamber and clear a firearm is not ideal.

Which is better, a Snap Cap or Dummy Round?

It really is a personal choice. If you can make your own, dummy rounds are cheap to make. Just be sure to paint the dummy round a bright color to differentiate it from live ammunition. Prices for Snap Caps vary drastically, and it is one of the products where it really is true that you get what you pay for. I have seen extremely cheap Snap Caps, and they simply don't last. Worse yet, parts can break off inside your firearm. Neither one is what you want. (See our recommendation here) 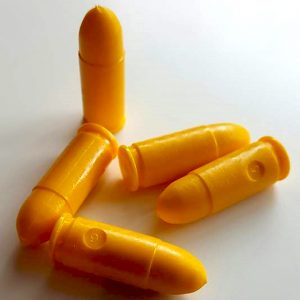 Dummy rounds like these are super inexpensive. Unfortunately, it is because they don't last. I have seen these types of snap caps crack and break leaving pieces inside the gun.

One thing you should expect to happen to all Snap Caps or dummy rounds is that after a lot of use there will be some ‘bullet' setback. Basically, because the cartridge is repeatedly being chambered, the ‘projectile' is gradually pushed further back into the casing. How long this takes just depends on use and the quality of the product. A little setback is not a big deal. But once it gets to a point where the product is not chambering, its life is pretty much over.

I have found these Snap Caps from Newbold Targets perform well and are an incredible value. A-Zoom Snap Caps are also a quality product but tend to be more pricey.

If you are a gun owner, whatever you do, don't sell yourself short by not having some Snap Caps on hand.

10 Responses to Simple and Effective: Why You Need to Use Dummy-Rounds