Some time ago I was a participant in a radio talk show here in Utah. A good friend of mine is the regular host. While listening I called in regarding the following question: “What is different about carrying your firearm in cold weather?” This was a timely concern as I had been practicing accessing my carry gun from one of the SIG-Tac farm coats for concealed carry I had received as a gift, and discovered how long it took to get the gun in hand and ready for engagement. While the coat is set up for revolvers and semi-autos, I used a K frame Smith and Wesson revolver in the left breast pocket, which is reached by pulling apart the hook-and-loop closures about mid to upper chest with both hands. I was carrying as I normally do on my hip and had added this mode of “pocket carry” to check weight and balance and when in an appropriate place, access. I discovered that the firearm carried well, did not shift position, was well hidden by the thick fabric and did not affect my sense of balance. These were positive factors. On the negative side, it took TIME to get my hands in correct position, pull apart the Velcro closures and get a firing grip on the revolver. As this was discussed on the radio program, my friend noted another factor I remembered as soon as he brought it up: the hook-and-loop closures open up with a very loud ripping sound. That raises the issue of discreet access. The negatives now out-weighed the positives. We determined that another gun in a pocket holster would maybe be a better first access choice, with the back-up in the chest pocket area. We also decided I could carry three: one in my regular position, one in the front hand pocket in an appropriate pocket holster and the last in the concealed chest pocket. The host noted that seemed like “a lot of hardware.” I replied that in Utah, Concealed Firearm permit holders are not limited as to how many firearms can be carried. I then shared one of my favorite quotes from Clint Smith who operates Thunder Ranch in Oregon: “One is none, two is one, three is better.” We further discussed the need to adapt to the seasons and practice access. As weather changes, we often are wearing multiple layers of clothing that can hamper presentation of the defensive firearm. If you carry inside or outside the waistband, clearing the covering garment is harder when it is thicker or you are wearing more than one layer. This requires careful practice and also takes time. Here is where the pocket-carry position shines. You can have your hand on the weapon, and no one knows! Many in law enforcement use this technique in colder weather or even in warm weather in situations such as traffic stops. The holster should keep the firearm in position and not allow it to shift or rotate, and the trigger should be covered. The firearm should not snag, be able to be fired from the pocket if necessary and be more resistant to pocket junk such as lint. Likely candidates could be one of the many hammerless or shrouded hammer revolvers that are available from a number of manufacturers. My personal choice is a Smith and Wesson Model 642 Airweight loaded with factory 38 special hollow points specifically developed for use in short barrel revolvers. To that I added a set of Crimson Trace laser stocks. The laser dot is adjusted to appear just over the front sight at about 20 feet. My thought process here is that if I am knocked to the ground and can’t get a good sight picture, at close range the bullet will go where the red dot is on the attacker. It proved very handy some time ago to have it in the front left pocket of my tuxedo pants riding in a Kramer horsehide pocket holster when my wife and I were confronted by a group of four tweekers on the campus of a local university late one night after we had performed in a concert. My wife was working with people in drug rehab at the time and noted their behavior was unusual much as Meth users would act. They were waiting by our vehicle. Our awareness of their presence, and my ready posture defused a potentially deadly situation. During the whole encounter my hand rested comfortably on the stocks the Model 642. It was reassuring to know I had the means, if necessary, to defend my wife and myself. To quote Clint Smith once more, “A gun is comforting…not comfortable.” 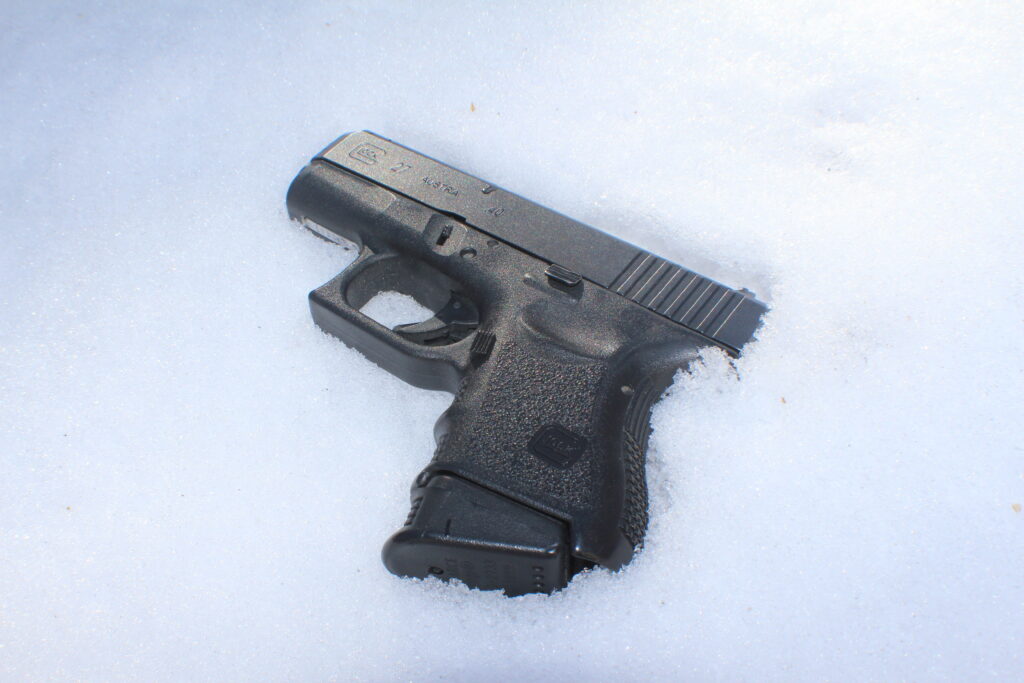 The needed thought, research and practice involved in cold season carry are things each person should consider and proceed with carefully. Be sure to include reloads, flashlights, a cell phone and whatever else you would normally carry in your self-defense kit. I had reloads in two different pockets that night. In practicing access and rehearsing reloads, use a dummy or a multiple-checked EMPTY firearm. Remove the ammunition from the practice area to prevent negligent discharges while practicing! Just because it is cold does not mean criminals will not target you. Don’t delude yourself that you won’t need your defensive tool kit due to a drop in temperature. Walt Rauch writing in an article in Combat Handguns titled “Practice to be Street-Ready” said the following: “…it is all too easy to listen to the naysayers and believe that the chances of needing a handgun for self-defense are so remote and compromises made are unimportant; that you’ll still be able to be effective if such a need should ever arise. Well, hope is not ability and in this case is simply an excuse or a way to rationalize not bothering to practice when so dressed. I suggest a compromise. Try to allow a few minutes of your time for a draw and cover exercise and practice re-holstering or so concealing the drawn gun so that it is not in your hand.” He then goes on to review the prevention of negligent discharges while practicing the needed skills. He also emphasizes the need to make sure the carry gun is reloaded before venturing out the door! He notes he has on occasion started out the door with the safe and UN-loaded carry gun. I’ve met several people, who during training sessions, did not reload afterwards, or came with the gun not loaded. To avoid this, take the extra few seconds to make sure the tool is ready for use. Another issue that I’ve noted recently is discussing problems with off-body carry. Purses can present particular difficulties. When checking out some side-access carry purses, I found the user could not remove the handgun due to the constriction of the entry point when the hand had a firing grip on the gun on one style of purse. On another, the Velcro closures were so heavy even males could not get through them to access the firearm.. It is best to test this in advance before purchase, with an unloaded or dummy firearm. It all comes down to checking, evaluating and practicing before carrying.

The discussion on the talk show was, hopefully, informative and educational to the listeners. I learned and reconfirmed several ideas about cold season carry. Enjoy the time of year. Do not let your awareness falter due to too much holiday celebration! Evil never takes holidays and may target you and yours. Stay prepared, as wolves don’t hibernate.