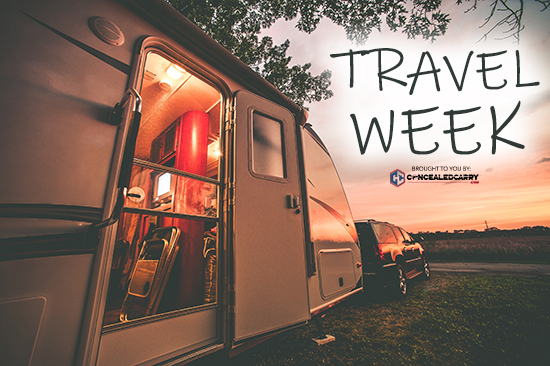 Welcome to travel week. If you hadn't noticed we are just weeks away from one of the most traveled weekends of the year for Americans as a whole, so we decided to dedicate much of this week to traveling with a firearm. Believe it or not, many people don't know that you can travel with a firearm, legally. There are some things you need to be aware of when you go away with your gun. Some of these are things you may not have thought about, while others I'm sure you have.

In a moment, I'm going to explain why I don't put gun decals and stickers on my car. But, before we get there, let me explain a bit more about Travel Week.

I'm going to come right out and say it. If you don't want to miss anything we're doing this week, sign up for the newsletter. It doesn't cost you a thing, and we are going to be sending out articles, podcasts, and other content that were previously published. What this means, is that unless you know what you're looking for, you may not see it.

Now, onto why I don't stick gun decals on my car —

I am in no way suggesting that your First Amendment rights don't matter, or that you should quelch what you believe or want to say. I think that if you want to have these stickers on your car, then you should have them on your car. My goal with everything regarding this website is education. If you've never thought about this aspect before, I want you to hear it. But for me, I don't do it for the reasons that follow.

At the end of the day, all that matters is your level of comfort broadcasting that you may have a gun in your car. I would never tell you to not do something.

It may seem odd, but not all cops are pro-gun. In fact, many of them are trained to be anti-gun in states that are really unfriendly to us pro-gun folks. I think you know the areas I'm talking about, right? New Jersey, Maryland, Massachusetts, parts of New York, California, etc., all suck for gun ownership. So, I just moved from Pennsylvania to North Carolina. But, I still have family up north.

Let's say I've got my gun family sticker on my back glass, a Hillary for Prison sticker on my bumper and a few other really good ones. But, then I drive through Maryland on my way to visit family over Thanksgiving. Am I now a target by police officers who have been trained to be anti-gun?

Would they pull me over looking for probable cause to find a gun? Even if they wouldn't, I don't want to put myself in that position. Check out this video:

That above incident happened in Georgia of all places, and the driver was patted down because of his right to carry sticker. Georgia is generally a very pro-gun state, so it's a bit shocking. Of course, the argument can be made that the citizen didn't respond appropriately and I won't argue that. But, the cop  went out of his way to mention that sticker.

Here is another thing that happened in Maryland where police were basically warned that people who have Second Amendment support stickers on their cars were bad news. I don't consider myself a criminal, or a terrorist. None of my gun-owning friends are, either. But, that news did come about a few years ago.

And then there was this … Now, don't tell anybody but I actually know this clown, John Cramsey. He operated his range by where I used to live and I went shooting with him a few times. He had a decked out truck with stickers and decals all over it. Many people believe that's the reason why he was pulled over, and of course he had a bunch of guns on him trying to get into NYC.

This one goes beyond travel a bit. But, I believe that criminals canvas houses and cars looking for certain tells. If I had my SIG sticker on my car, would the criminal break-in looking for a gun? Even if my gun is on my person, I don't want my car broken into. Personally speaking, I want to be as discreet as possible, and having any gun decals on my car violates that basic rule of mine.

Again, I'm not suggesting that you silence your beliefs or that you not put any stickers on your car. I'm just trying to help those of you who've never thought of this aspect to take a pause and think before traveling through an area where you could be jammed up. What you do is your business, and I'd never tell you what to do. But, I don't put stickers on my car, for these reasons.

Sound off on this subject. Am I way off base here? Let me know in the comments. And again, make sure you sign up for our FREE newsletter so you don't miss anything.