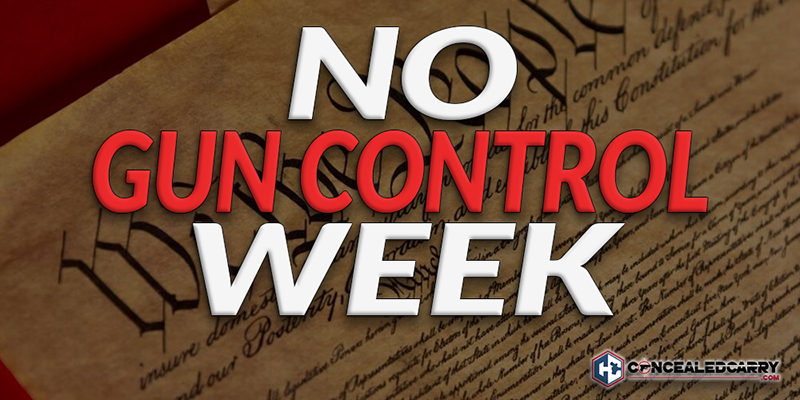 We enjoyed our last themed week so much that we thought we'd do it again. Last time our theme was about traveling with your gun. This time, however, with elections right around the corner, we thought we'd dedicate some time to what we're calling “no gun control week.”

It should hopefully go without saying that we don't want gun control at all, ever, not just one week a year. This is just a theme of ours. So, for the rest of this week, we're going to be focusing heavily on the crazy anti-gunners, how we can combat their idiocy with our own valid arguments, and why this all matters to begin with.

We are going to be sending you, our faithful readers, newsletters of previously published articles, as well as articles and resources that have yet to be published. Make sure you sign up for our newsletter so you don't miss anything. This stuff is going to be good.

They are after your guns. Gun control isn't about safety, nor is it about common sense. It's all about control. How do I know? I don't even have to go looking into what any of the politicians have said about guns, so called “assault weapons,” and gun control to find the answer (though they have given us much to ponder with their words, alone).

All we simply have to do is look to states where gun control is already a thing to get a glimpse of what they're after.

Let's look at places like Maryland, New Jersey, NYC, much of the New England states, and others.

All we have to do is look at what the anti-gun politicians have done in those areas to see what they want to do to the rest of the country.

In Maryland, even if you have a valid concealed carry permit from another state, you could be arrested for having a gun on you, facing criminal charges, prison, large fines, etc. I've heard horror stories from folks just passing through Maryland with their firearm in the car following 926A to a “T” and getting jammed up.

It's nearly impossible for you to get a permit to carry your gun if you're a resident, as well. I once read that only 1.5% of all gun owners in MD were able to obtain a permit, and even then, it's only valid for a short time. And if you're ever caught carrying a gun on your person, you can be arrested, tried, and spend up to 3 years in prison with a minimum 30 day sentence (according to this MD lawyer website).

They even restrict the type of guns you can buy. Many different types of firearms, to include rifles and handguns, are considered to be a fabled “assault weapon.” The most common trait of one of these unicorns is that they have a magazine capacity of more than 10 rounds. There are other traits as well, but I know that I personally own several guns with a magazine capacity higher than 10 rounds. I couldn't possibly live there.

It sucks to even have to drive through there on my way to visit relatives in Pennsyltucky. But, ya gotta do what ya gotta do, and I still have family up there.

They also have firearm registration if you're a new resident, and use the term “regulated” in their literature. In other words, you can't even buy certain guns without asking for permission. They say this on their website, which, to me, is ridiculous (typos are theirs, not mine):

While you can defend yourself if you reasonably believe your life is in danger when in the home, you're screwed if you're out in town unless you're willing to spend time in jail or are willing to poke people with your pocket pen (HA! Say that 5 times fast).

And, while Maryland has some of the strictest gun control laws on the books, the anti-gunners there want more.

As we've seen and pointed out in a previous article, the Slippery Slope Argument tells us that no amount of gun control will ever work until the mass banning of all firearms takes place. Because gun control does not work and they still have shootings there from the people who don't follow the laws, Maryland just enacted more restrictions on gun owners.

Those laws also won't work, and more will eventually be passed. It's a slippery slope, and once you're on it, you can't get off it. They'll continue to pass laws until the only thing left is the confiscation of all guns but single shot rifles and shotguns.

We need to go out and vote this November. Get out there and vote for the gun, not against it. Our very freedom depends on it.

Again, you can sign up for our newsletter to make sure you stay up to date on all of our pro-gun articles this week.