The advent of the internet has brought about immense unforeseen amenities made available at our fingertips. Video stores, phone calls to order food, letters to grandma and grandpa have all become nearly extinct in this modern world. Many time management issues for both consumers and employers are no longer a problem. For consumers, we have the aforementioned level of ease with buying items and receiving customer service and for employers, there is an immense level of quality control feedback from the general public.

Most major industries and programs have some sort of online presence where they have taken something that used to require a face-to-face meeting and found a way to turn it to an online program that creates ease on both the consumer and the company. The NRA has recently taken this step with its online training programs. (Learn more about the NRA Basics of Pistol Shooting hybrid course)

The gun industry has been pretty lax with its rollout of online services in recent years and has only just now started to catch up with other industries. There was the fear that there was less ability to adequately train online, without an instructor and less interest in doing so from consumers, but those trepidations have been nullified with the popularity of courses like those the NRA is offering. 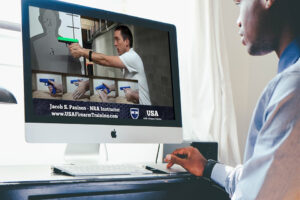 You Can Take A Concealed Carry Class Online

The idea of an in-depth course structure thought out by the best of the best in the NRA's ranks turns a lot of heads for the people that previously felt online firearm training should be off the table. The students get more out of the programs because of their thoroughness, and the NRA knows that they are putting out their best material to trainees. Even if the case comes along that there are issues with trainees not liking the program offered online, or feeling they are not getting proper training, there is a built-in quality control system, with e-mail and comments about the programs right there on the NRA's site.

But this and other programs aren't just about the level of thoroughness, they are about ease, as well. The idea of being able to learn from home, without the cost in dollars and time of going to a local range is appealing to many people. And the dollar amount is definitely an improvement. You can receive as much as a 60 percent discount from doing your training online. That combined with the time saved is a reason for a lot of people to make the change. While it may be sad to admit, this might be the only way some people will get any firearm training at all.

There are even a number of states who will allow you to carry concealed (with a permit) by taking an Online Only Concealed Carry Class.

Now, to be clear it is the opinion of USA Firearm Training that all gun owners should seek out ongoing training as part of a lifelong pursuit and lifestyle. It is also our opinion that watching videos online, no matter how valuable, is not as valuable as taking a course face to face with an instructor. With all that said we also understand the need to get the best training out into the hands of as many gun owners as possible and for that reason we endorse and provide online firearm training as a part or supplement to an overall training strategy of our consumer.

So if you have ever been interested in receiving gun training but have never been able to take the plunge because of cost or travel, the future of online training might be able to make your life easier and safer.