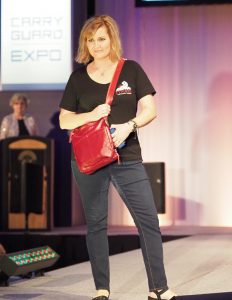 A Concealed Carry Purse by Cyndees

I'm sure I'll be ruffling up some feathers on this one, but I'm going to take a stance and point out something that I think is really stupid. Before I move on, I just want to say that I know there is a time and place for off body carry for certain people who need to carry this way for one reason or another.

But for a majority of people, off body carry, like putting a gun in a purse or some other thing that is not meant to be permanently attached to your body like an actual holster, is stupid.

Let me re-word this: Putting your pistol inside a safe holster that is designed to be attached to your body is the ONLY way to go for most people.

To prove my point, here is a news story out of my home state, NC that is utterly devastating for the family. We all learn from each other and the mistakes we make, this is no different.

Cornelius, NC — A young child found his mother's gun in the purse the mom used to carry said firearm. This child found and then shot his mother with her gun just a few days ago as of this writing. She was pronounced dead on the scene by the paramedic.

One of her five children also had a gunshot wound but is thankfully expected to be okay.

There were also no gun signs on the property to the apartment complex that were seemingly placed after the complex had some bad actors that had been kicked out. (I point this out because we have a resource about gun owners and renting apartments that is found here.)

What's the point with all this?

Well, there are actually several things that we can learn from this sad incident.

First, make sure you're only carrying your gun in a proper holster. Off body carry should only be reserved for certain people, maybe with physical limitations or something like that.

Being uncomfortable is not a good enough reason to carry off body. If you are not comfortable with carrying in a proper holster, buy a new one that you can attach to your body that is more comfortable.

If you carry off body it is inevitable that at some point you will leave your gun where someone who shouldn't have it, might get it. That could be a little child, a purse snatcher, or maybe you'll mindlessly leave it in a changing room one day when you're in a hurry.

None of the above are acceptable.

Second, make sure you're teaching your kids about guns so there is no mystery involved with them. If they see you touching your gun but you never tell them that they shouldn't and why, they're going to want to. Now, I have no idea if she taught the older kids and she very well may have done so but there is a default setting we all need to be aware of.

That default setting is this: Teach your kids about guns the moment they're ready to learn about them. Keep your guns away from them until they are old enough to understand why they can be dangerous in the wrong hands.

Each child will be different but it is clearly better to be safe than sorry like in this incident.

Third, we have another default when other qualifications aren't met. If your children are not old enough and you don't carry on your body, then you need to put your gun in a safe when it is not in use.

To me, in use is when the gun is on my body. So during the day when I'm carrying, the gun is technically in use by me ready to defend me and my family should the need arise. When I go to bed at night the gun goes in a quick access safe.

The difference is that if you carry off-body in a purse or similar, while you're holding that purse the gun is in use. The moment you put it down on the table, counter, floor, shopping cart, etc., it is out of use because it is no longer on your body.

When it comes off your body and is no longer in use, if you have small children around you need to put it in a safe.

A lot of people will say that I'm stupid for putting my gun in a safe, and that's okay. I don't need to answer to you. But if you have little kids like I do, even though I have taught them about guns and gun safety to the best of my ability and I feel like they understand all I've said, I still feel like I'd rather keep my stuff locked up.

During my waking hours I'm armed. When I sleep the gun is in a quick access safe.

It's my opinion that off-body carry should only be done under certain circumstances. Your comfort is not one of those circumstance. Get a real holster.

One Response to Why I Hate Off Body Carry