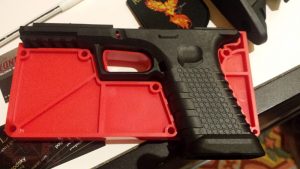 Those dreaded “ghost guns” are back in the news again as the Attorney General from Washington DC sues 80% gun maker Polymer 80.

Attorney General Karl Racine brought a lawsuit to Polymer 80 saying that they've been selling illegal guns in the district, and that those guns were used to commit crimes hundreds of different times in the past few years.

The PDF I read states that it's illegal to purchase an 80% finished firearm because that piece of plastic is essentially a gun that is not marked with a traceable number and that Polymer80 knew this and intentionally deceived their consumers into thinking that these “guns” were legal to purchase.

According to Racine, their products were “linked” to at least nine murders and that 83.2% of the 250 guns recovered by the district police since 2017 were “produced” by P80.

The AG went on record, saying:

Polymer80 makes it easy for individuals to buy unmarked and untraceable firearms that are commonly used to commit violent crimes … Indeed, Polymer80’s guns have been used in several homicides in the District. The Office of the Attorney General is seeking a court order to stop the company from selling ghost guns to D.C. consumers and to get these deadly weapons off our streets.

For some back story, Washington DC council members approved two gun control bills back in March of 2020. The bill was dubbed the Ghost Guns Prohibition Emergency Amendment Act of 2020 and carried a temporary 90 day ban as the lawmakers put something more permanent together.

This effectively changed the wording as the temporary bill was replaced on May 27, 2020 with a permanent one. It says this:

They are suing Polymer80 based on their advertising practices, which allegedly states that the guns were legal for District citizens to own — even though it doesn't actually state that they are legal to own, just that per the BATFE determination letter they don't meet the requirements of being considered a firearm.

Here is a quote from the complaint in the above-linked PDF:

In advertising and selling its firearms to District consumers, Defendant expressly and by implication misrepresents (1) that it can lawfully offer, sell, and provide its firearms in the District; (2) that its unlawful firearms do not need to include legally required serial numbers or other identifying information; and (3) that it is lawful for a District consumer to possess Polymer80 lower receivers and pistol frames in the District. These, and other actions, are each misrepresentations of material facts which tend to mislead District consumers and are therefore unfair and deceptive trade practices …

In advertising and selling its firearms to District consumers, Defendant fails to disclose (1) that it does not possess a commercial license to sell firearms in the District; (2) that its unlawful firearms also fail to include legally required serial numbers or other identifying information; and (3) that it is unlawful for a D.C. consumer to possess an unlicensed firearm in the District, including Defendant's lower receivers and pistol frames. These, and other actions, are each failures to state material facts which tend to mislead D.C. consumers, and are therefore unfair and deceptive trade practices …

After comparing the Polymer 80 website to others who say they will not ship to certain areas where it's illegal to own such paperweights, it looks like they may have a hard time in court. Though, I don't believe they intentionally deceived anyone with their marketing.

I'm not entirely sure what type of world we live in where one governmental agency says that something is not a gun while local governments drop a fat deuce on the Second Amendment saying you can't own something that isn't even a gun.

In full disclosure, I consider the guys from P80 to be business friends even though I haven't seen them in a couple years. I would stop by and see them at the SHOT Show and other convention booths. I remember their first SHOT Show up on the NEXT floor when they brought their pistol frame and recorded them in an interview for the publication that shall not be named.

And in fact, that picture up at the top of this article was taken at that SHOT Show up on the third floor outside the press room.

They're decent people and definitely don't deserve the slander and heartache this will cause them.

As of this writing I've not read or heard about any statements issued by Polymer 80, but plan to reach out to them and see if I can get something.