Join Our Newsletter
Shop Our Store
MAIN MENUMAIN MENU
By Joshua Gillem on June 17, 2017 in News 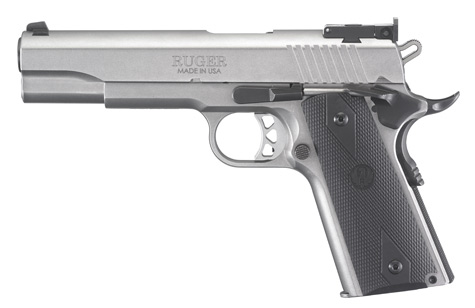 Fans of the venerable 10mm, rejoice for another major gun manufacturer has stepped into this realm. The Ruger SR1911 in 10mm Auto is bound to be popular with the “bigger is always better” crowd, and many are hopeful that with a company like Ruger getting into the ten-mil market, it will help ammunition manufacturers come down in price on this powerhouse self-defense cartridge.

Ruger has stated in their Press Release that this new take on their SR1911 is geared towards both hunters and those who want more power in their self-defense piece. It gives 8+1 rounds of 10mm Auto, a five inch bull barrel, and an all-steel construction.

That all stainless steel construction, by the way, helps this 1911 from Ruger tip the scales at 40.4 ounces, which is just over an ounce heavier than their .45 ACP version. And, for further comparison, a Glock 20 with slightly smaller dimensions weighs at about 10 ounces less. And, of course, all weights taken are with empty pistols.

Ruger's new pistol is set to ship with 2 magazines and a cable lock with an MSRP of $1019.00. While that's no small amount of money for the average Joe, it is likely able to be found cheaper than that in your local gun store. This classic, Series 70 design in 10mm is sure to turn heads at the range, and will hopefully help revive this cartridge even further, like Colt's Delta Elite did, back in the day.

I, personally, can't wait to get my hands on one. And, when backed by a company with a fantastic customer service program put in place who sells well-built guns like Sturm, Ruger & Co., Inc., does … well, it's bound to be a home run.