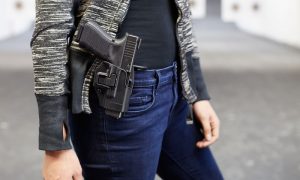 Despite efforts by the Missouri Governor to impede gun rights; Missouri will become a “Constitutional Carry State” starting January 1st 2017. This will allow most adults to carry concealed without a permit, in the state, as Missouri's Republican-led Legislature used its majority to overpower the governor's veto attempts and bring the changes into place.

On top of the constitutional carry component, this legislation also will create a “stand-your-ground” right in the state. This means that people don't have a duty to retreat from danger any place they are legally entitled to be present. The NRA says 30 states have laws or court precedents stating people have this right currently, and Missouri will be 31. It will be the first new state to join the group of “stand-your-ground” since 2011.

The new law also expands the “castle doctrine” by allowing invited guests such as baby sitters to use deadly force if confronted in homes.

However, the legislation prompted some heated debate last Wednesday. Democrats were stating that the changes could negatively affect the black portion of the population, believing that they will be targets for additional crime.

“The targets in our area are black boys, not pheasants,” said Sen. Maria Chappelle-Nadal, who represents Ferguson, where sometimes violent protests broke out after the fatal police shooting of 18-year-old Michael Brown in 2014.

“What I don't want to get to is the point where there is a trigger-happy police officer or bad Samaritan like Zimmerman who says, ‘Black boy in the hood. Skittles. Let's shoot,”‘ Chappelle-Nadal said, a reference to Trayvon Martin, a black 17-year-old who was walking back from a Florida convenience store after buying ice tea and Skittles when he was fatally shot by neighborhood watch volunteer George Zimmerman in 2012.

Republicans said such fears of greater gun violence are misguided. “The basis of this whole bill is that it allows law-abiding citizens to protect themselves and their families,” Republican sponsor Sen. Brian Munzlinger said.

But let's not forget that this law applies to all. It is not a law to state that only white people get to have this right. It is that every citizen of Missouri, whether black, white, blue, or purple has the constitutional right of concealed carry. Just as the second amendment allows.