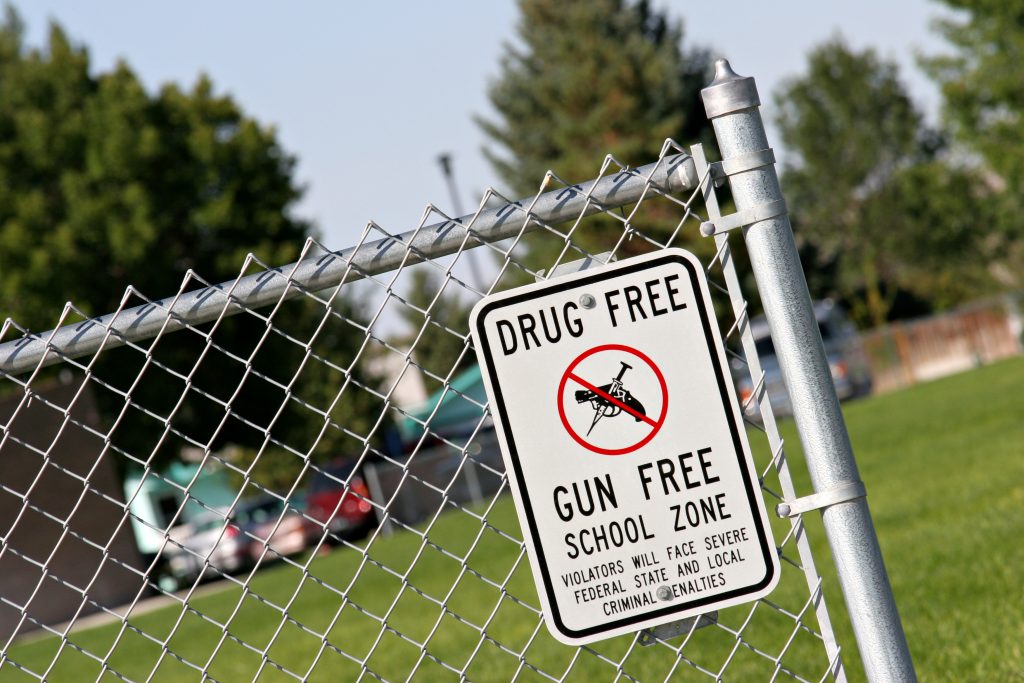 Since we have been getting an increased number of questions about this law in the recent weeks I am taking this opportunity to share some information that will hopefully clarify the finer points.

What Does The Act Say and Mean?

It shall be unlawful for any individual knowingly to possess a firearm that has moved in or that otherwise affects interstate or foreign commerce at a place that the individual knows, or has reasonable cause to believe, is a school zone.

This Federal Law, which was signed into law in 1990 by President Bush, makes it illegal to have a firearm in a school zone. There are exceptions which will be covered below but first let us clarify some terms and definitions.

What is a School Zone?

As defined by federal law:

What Kinds of Schools are Covered?

The law applies to all public, private, and parochial elementary schools and high schools. It does not apply to college campuses or Universities. The application to private schools is especially interesting.

What Are The Exceptions?

The prohibition of firearms in school zones does not apply if any of the following provisions are met. Note that I've added my own commentary in brackets [].

(iii) that is— [speaking of the firearm itself]

(iv) by an individual for use in a program approved by a school in the school zone; [like if the individual has the firearm in order to participate in the school's rifle club]

(v) by an individual in accordance with a contract entered into between a school in the school zone and the individual or an employer of the individual; [So if the school has hired or contracted an armed security guard for example.]

(vi) by a law enforcement officer acting in his or her official capacity; or

(vii) that is unloaded and is possessed by an individual while traversing school premises for the purpose of gaining access to public or private lands open to hunting, if the entry on school premises is authorized by school authorities.

So, even in states with “Constitutional Carry or Permitless Carry” one should still consider obtaining a permit as it allows one to have a firearm within 1000 feet of a school.

Please note that the permit only makes this law not apply to you when in the state where that permit was issued.

So if you are reading everything carefully you may feel that having a concealed carry permit/license in your state means that this law doesn't apply to you (true) and that you can, therefore, have your firearm in a school (probably not true). That is not the case.

Even though this federal law doesn't apply to those who have been issued a permit/license; that doesn't mean you don't have to follow any state laws. So if your state has any laws related to the carrying of or possession of a firearm in or near a school those laws still have to be followed regardless.

Get a permit. Be familiar with your state's laws.

What questions or comments do you have about your ability or right to carry a firearm in or near a school? Tell us in the comments below.