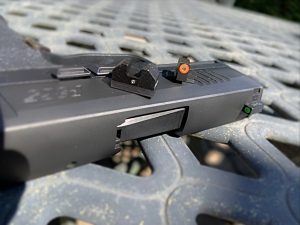 How do these F8 sights from XS compare to the great factory sights on the Sig P365?

If you're looking at the new F8 Night Sights from XS Sights and wondering if they are as good or better than the original Big Dot sights, here is my take.

I've had the original XS Big Dot sights with the white front dot on a Glock 27 for nearly 4 years now. Transitioning to a sight system like the Big Dot took some getting used to. But once I adjusted, I found they were very intuitive for defensive-shooting.

The large dot is easy to pick up and the single vertical line on the rear sight was really all that was necessary for acceptable defensive accuracy out at around 25 yards. I have really grown fond of the bright colors and was happy to see the Big Dot in orange. I have been impressed with them, and XS sights in general, so when they released their F8 sights, I was really excited to try them out.

XS sent me a set of  F8 sights for my P365 to evaluate and review. I don't think there is anything wrong with the X-Ray sights that come standard on the P365.

Is it worth upgrading if you have a good set of sights already? 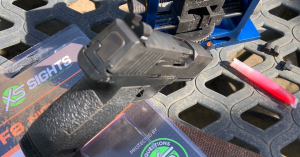 XS is known for its quality sights, and the F8 doesn't disappoint.

In my opinion, night sights cannot be merely phosphorescent, it has to be made with tritium. Phosphorescent sights only glow after being charged up by external light. The F8 sights like all the other XS Sights have front and rear tritium, which will glow continually for 10-15 years or more.

The inner part of the front sight dot uses ambient light to glow, but the inner dot has tritium and glows continually. The front sight dot is large in size, and is bright orange in color. It seems slightly smaller than the original Big Dot but larger than most other sights.

The F8 rear sight is matte black with a slight variation on the traditional square notch. Instead of everything being hard 90-degree corners, the notch has a slight U shape to it. Not as pronounced as some others.

You may like three dots or you may prefer a completely blacked out rear sight. Some of what drives the selection of your rear sight configuration is, of course, a personal preference. But in my opinion, the traditional 3-dot sight configuration is counter-intuitive to quick sight acquisition and not even a benefit in high-precision shots.

The reason I say this is because of how the human eye works.

Our eye is likely to focus on what draws the most attention, not necessarily what we should be focusing on when shooting. There really is never an application where your focus should be on the rear sight.

Anything on the rear sight can and will draw attention from the threat or front sight focus you should have depending on the specifics of that shot you're taking. And the dots just simply do not help in alignment. It is far easier to ensure the top of your sights are flush, than it is to line up three dots on two different focal planes.

If anything should draw your eye's attention, it should be a contrasting front sight.

In low light, however, there is a possibility of losing where your front sight is in relationship to the rear sight. In this case, having a small tritium dot as a reference point is helpful. It also allows for pretty simple sight alignment, the big dot sits on top of the bottom dot creating a figure 8. 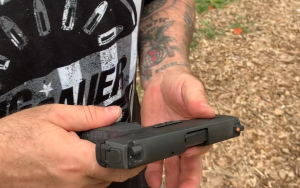 The taller F8 front sight may be an issue for custom holsters that don't accommodate this increased hight.

I am of the mindset that any rear handgun sight made for an EDC gun should have a flat forward face. Thankfully the F8 sights have this flat face that facilitates single-handed slide manipulation.

Of course, you don't want your sights to break off or mal form in a fight, and soft metal sights can be damaged during installation. Thankfully the F8 sights are made of bar stock steel, which is durable.

Using the F8 sights and comparing them to the Big Dots:

Right away I noticed both front and rear F8 sights were taller. This may be an issue as some holsters may not have enough clearance for the taller sights. Most holsters nowadays are made to accept suppressor height sights, but it's always good to check.

The added height is not quite suppressor height, but I found that I was able to get a decent lower co-witness to a Shield RMS/c with these standard F8 sights.

I like the higher front and rear sights. It takes your eye focus slightly further away from the slide and moves it to the sight where it should be. The F8 sights have a wider rear notch, which allows you to see your front sight and more of what you're aiming at when you look through the notch.

Too narrow of a rear notch and all you see when you look through your rear sight notch is the front sight. At the same time, if the rear notch gets too wide, it increases the margin of error in aligning the sights. I think the F8 sights have a good balance here, especially in a self-defense context. 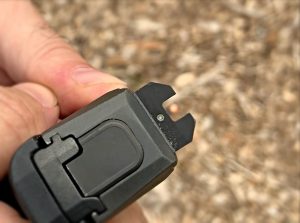 I really like the balance between front sight thickness and the width of the rear sight notch.

The front sight post is pretty wide and looks about the same thickness as the old Big Dot. And it is this difference that I think may cause you to favor one design over the other. The top edge of the F8 front sight is flat across the top. On the original Big Dot, the top of the front sight is rounded, following the edge of the dot.

What I've found is that the point of impact is the dot and not the top of the front sight. I noticed that when aiming at a 4″ circle at 10 yards, the taller, square top of the F8 seemed to cover more of the target than the Big Dot. Meaning I had a slightly better sight picture with the original design.

This likely has a lot to do with the fact that I am familiar with the old Big Dot sights. At an intermediate distance (10-15 yards) with a 4″ target, using the F8's I was consistently about an inch or two lower than I called.  Again I think this has to do with me trying to set up the same sight picture as I would with the Bog Dot.

After shooting with the sights for a while, I learned where the point of impact was with the F8 sights. That being said, a buddy who has never shot any XS Sights before absolutely loved the F8's and thought my Big Dot's were really difficult to shoot accurately. This underscores my belief that when it comes to accuracy, you probably have defaulted to a certain sight picture based on your current set up.

Depending on what that is, you will be inclined to like certain sights over others. 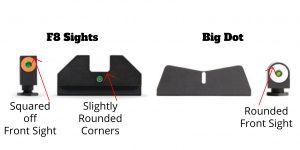 I really like the rounded top of the original Big Dot, but there are definite accuracy benefits of the squared-off front sight.

My Opinion on the F8 Sights:

It's hard for me to choose one over the other. I really prefer the orange color of the F8 sights, and I like the rear sight. But I have grown accustomed to the rounded top of the Big Dot's front sight.

The F8 sights provide better accuracy at distances over 25 yards because of the square front sight and the flat top of the rear sight notch.

I don't know where I stand on which is better because both setups are good. I do know that the F8's are staying on my P365. I prefer the size and color of the F8 front sight a bit more than the factory X-Ray sights.

All in all, the F8 sights from XS have all the qualities you want for a self-defense handgun. They are made of steel, use tritium, have a large, conspicuous front dot, a diminished rear dot with tritium, and have a good ratio between the thickness of the front sight and width of the rear notch.

They also are from XS Sights, a company with a great reputation, a 10-year warranty, and terrific customer service. They are currently retailing at around $130-$150 dollars, which is in line with other tritium sights on the market. If you're going to do anything to upgrade your firearm, a set of night sights is a no-brainer, and you can't go wrong with any of the XS Sights.