Join Our Newsletter
Shop Our Store
MAIN MENUMAIN MENU
By Jacob Paulsen on December 12, 2017 in Gear 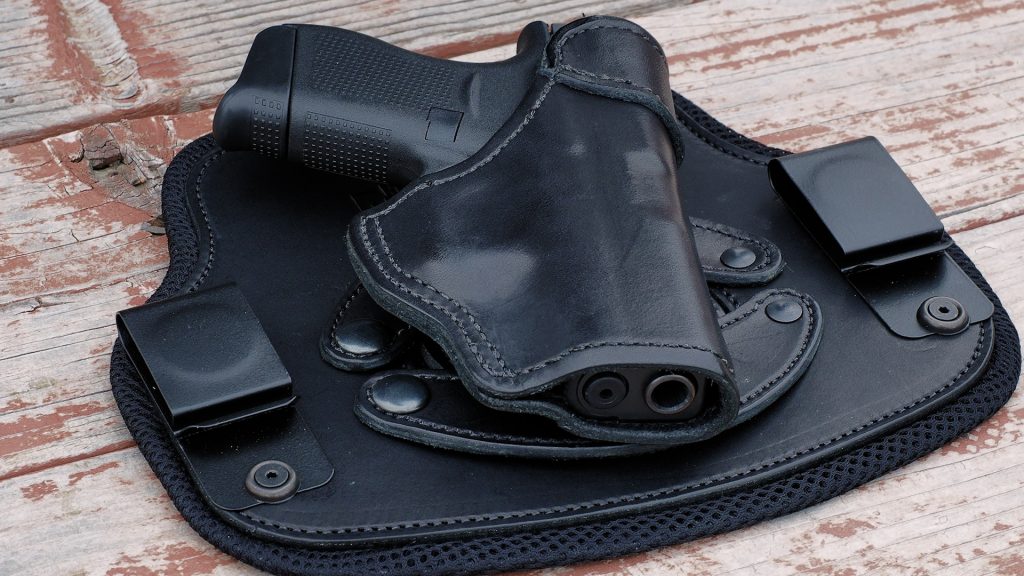 In September of 2017 Urban Carry brought Riley and me down to Orlando to their headquarters for a preview of the new Revo holster system to be launched in October 2017. Urban Carry has made a name for themselves in the industry by thinking about concealed carry differently. The G1 and the later upgraded G2 holster was unlike anything anyone had seen before and Urban Carry was born and grew into a large holster manufacturer very quickly.

The new Revo holster was also different from anything else you have seen on the market with an interesting approach to solving some age old problems of holsters.

Although this review may have my name at the bottom it is a joint review from Riley and myself in reporting on our experiences with the new Revo holster system from Urban Carry.

The Awesome Approach and Premise of the REVO Holster System

Urban Carry has built the REVO to solve a few key problems in the Holster world including:

The solution? Urban Carry has released a series of holsters that attach to “rigs” in any chosen cant.

As you can see in the above picture; you purchase the shell (or holster pocket) for your firearm(s). Then you buy any “rig” you want to use. The different rigs are designed for firearm carry in different body positions.

“Rigs” or holster backing options include:

This video that shows Riley putting the holster through the paces shows the different rigs in use and shows how easy it is to attach the holster shell to the rig in the angle/cant of choice.

Riley's and my thoughts? We were sitting there in Orlando when they pulled this system out of a box and showed it to us. Both Riley and I had just recently talked to a different company that spent months trying to develop a holster that could be adjusted to any angle of cant but trashed the whole project when beta testers reported it was uncomfortable and too bulky. I looked at Riley and really hoped that somehow Urban Carry had overcome those obstacles. But they didn't.

More on that issue but first let me add some things that were impressive about the REVO system.

Urban Carry continues to have high integrity with regards to its quality of materials and construction. Every component of the holster seems well made and clearly the materials used are of the highest quality. They have extensive experience working with leather and the Revo System is no exception. Each rig and component of the system is well made, handcrafted by Americans, and is subjected to rigorous quality checks. 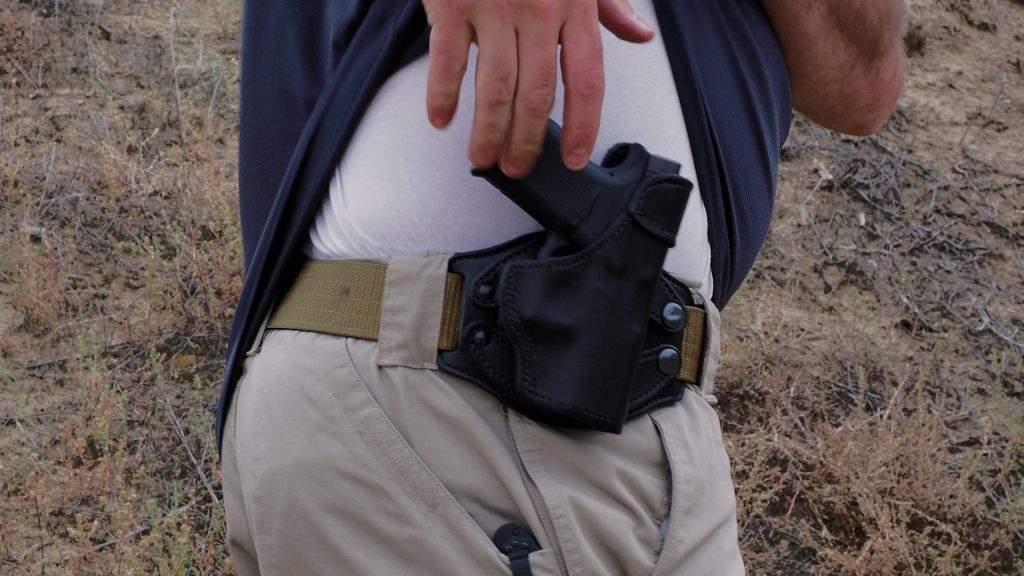 The backing on these holsters is quite comfortable against the body. The material reminds me of the Ventcore fabric used by StealthGear USA.

There is a strong economic argument made by the REVO system. If you often carry in 2 or 3 different carry positions and you rotate through 2 or 3 guns then instead of buying 9 holsters you can buy 3 “shells” and 3 “rigs” and save a ton of money. This system lives up to its claim in that regard, and we appreciate the pricing and marketing approach by Urban Carry. You can acquire a variety of concealed carry methods that will fit a variety of different guns for far less money than purchasing all those different holsters/systems the traditional way from other companies.

The Major Drawback of This Type of Construction?

The short answer is bulk. Achieving the “awesomeness” of any-degree cant and combining any shell with any rig results in a lot of layers.

What do those layers ultimately mean? More weight and a thicker profile. That thicker profile greatly reduces concealability. I just grabbed a few other traditional/comparable “clip” style IWB holsters and measured the thickness from back to front: 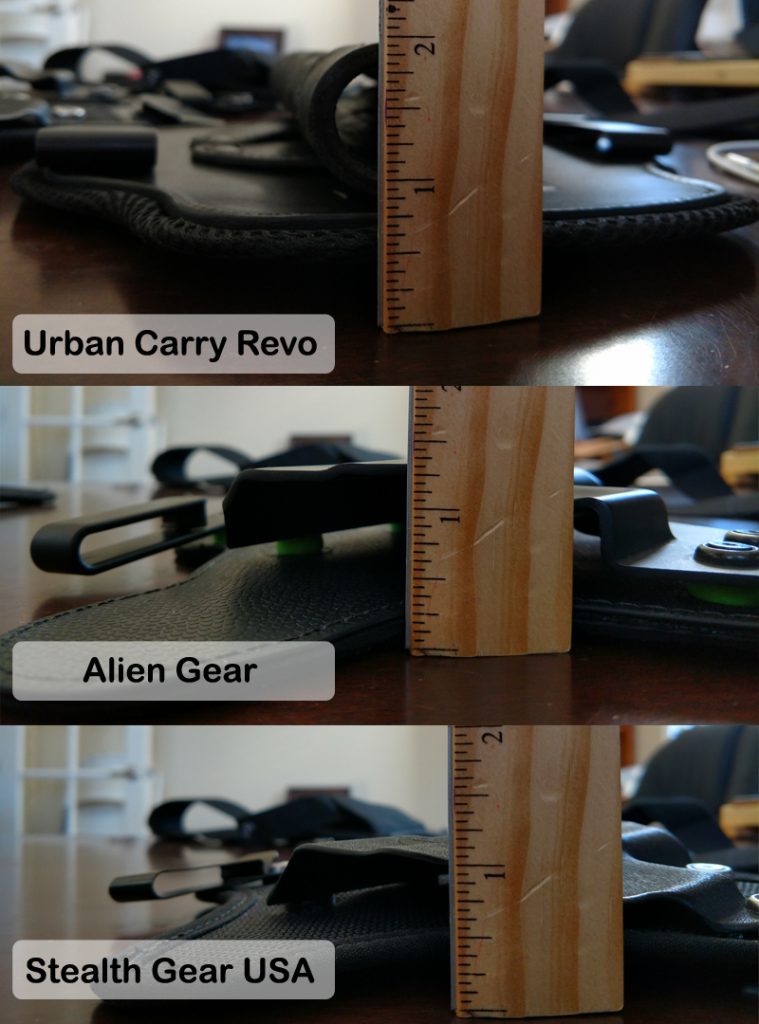 At first glance it doesn't seem like the added bulk and thickness is that much of an issue, but you really feel it when you carry with any of these holster rigs.

Riley and I also found that the retention of the shell to the rig achieved by the velcro and leather straps is not sufficient for OWB carry. The company did a test by using a spring scale to see how many pounds of pressure would be required to defeat the retention and it was over 100 pounds. Despite that, a “real world” test showed that the OWB rig really as big fail in this regard is it took very little effort and time to tear the holster from the rig as the video below demonstrates:

We are not as concerned with this anytime a holster and rig that is carried within the waistband is used, but I would definitely not recommend using the OWB rig for open or concealed carry.

Riley did some extensive testing with the Appendix rig and found it didn't want to stay in place. It employs only one clip which only attaches the rig and holster on one side of the gun, and it did not maintain its position in the waistband. Specifically, while wearing the appendix rig, anytime Riley sat down and stood up, the entire rig and holster would push up and out of the waistband by swinging or pivoting around the one clip location. This is also another of the rigs that would be difficult to endorse for any serious concealed carry.

IWB and IWB Plus 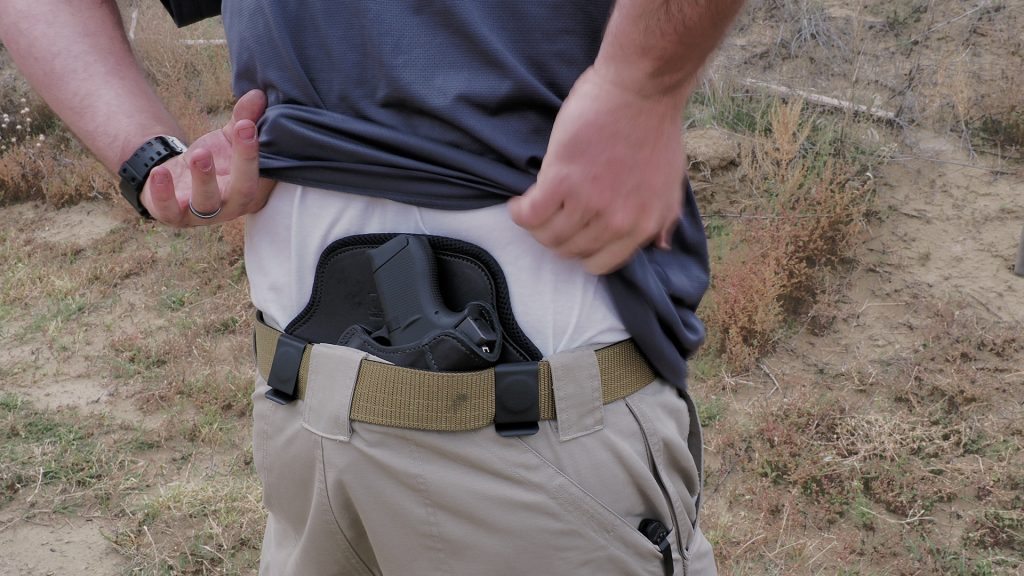 A closer look at the IWB and IWB Plus rigs take us back to that bulkiness problem mentioned above. Riley is a pretty big guy, and the first time he strapped on one of the IWB rigs he instantly recognized the added bulk of the Revo System. The extra 0.5-0.75 inches in thickness as compared to most other competing IWB holsters on the market translated into greater difficulty to conceal. This is a challenge since the point of wearing one of these holsters is to conceal. Add to it that it was bulky enough and challenging enough for a big guy like Riley to conceal, this was an even greater challenge for me. Wearing one of the IWB rigs made it feel like I had a large growth or tumor attached to my hip while wearing.

The difference between the IWB and the IWB Plus rigs is that the IWB Plus has a full sweat guard and the IWB rig does not. Even though these holsters and rigs were thick and bulky, comfort was not an issue due to the quality of construction and the padded backing material used. 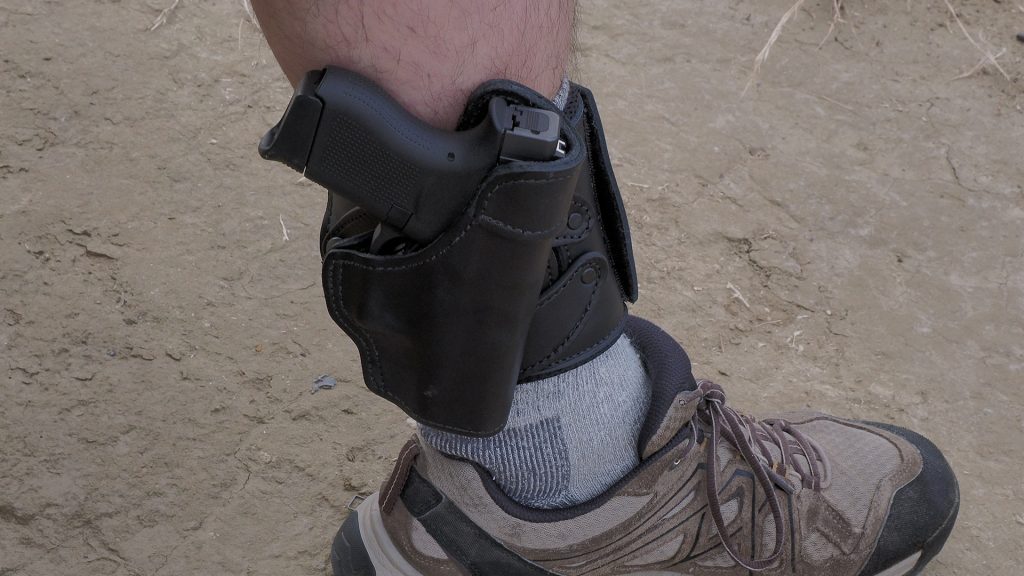 The ankle rig was executed pretty well. The rig itself, or the part that wraps around your leg, is very comfortable and adjustable to a variety of circumferences of legs. We could see ourselves wearing it all day and not noticing it as far as comfort goes. What we would notice, however, is that due to the way the holster attaches to the rig, and the fact that the holster is ultimately attached to a relatively small point on a velcro disc, when worn the weight of the gun would cause the holster to “sway” slightly back and forth on the rig itself. The rig was secure and not moving, but the attached holster pocket would wiggle just enough on the rig that it didn't FEEL secure. Ultimately though, other than being once again bulkier than competing products, which would be a challenge with some individuals and their choice of pants, the ankle rig performed just fine. 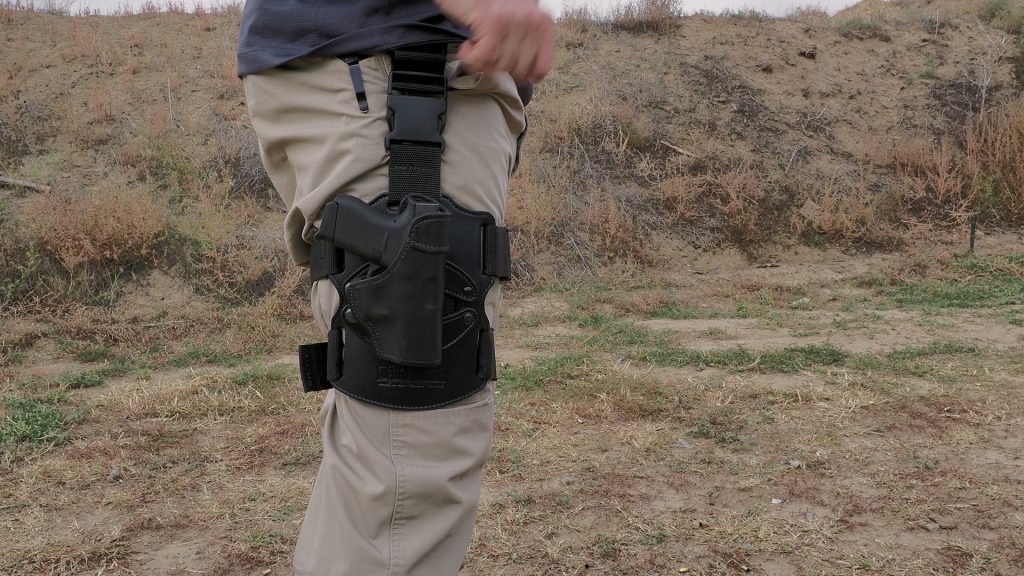 The drop-leg rig is well designed, attaches to the belt and leg securely just fine. But it shares the same weakness as the OWB rig–the holster is too easily ripped away from the rig. So it fails in that regard.

And finally, the shining star of this entire system … 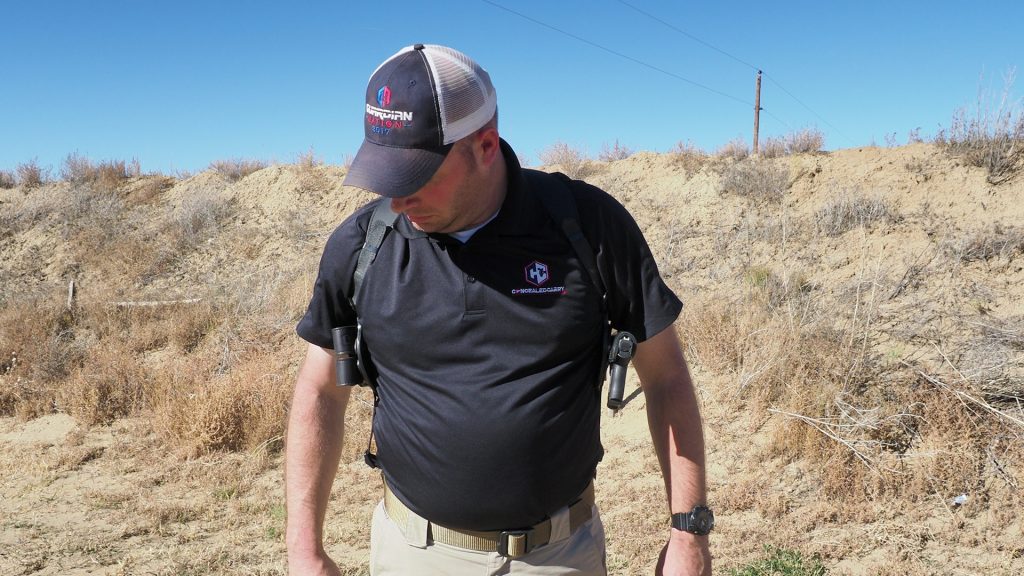 Our favorite part of the Revo System, and probably best executed, is the shoulder rig. The shoulder straps are great. They are widened in all the right places for comfort over top the shoulders. The clasps that attach to the belt or waist are secure and solid. There is nothing low-quality about the shoulder rig. You have the option of carrying a holster on one side and a spare mag pouch or pouches on the other side. (That said, any of the above mentioned rigs in this review can have open-top or closed-top mag pouches attached as opposed to a holster pocket if you so choose.)

Our one concern, and it is a minor one, is that the holster pockets themselves do not have a retention strap to completely retain the gun in a horizontal or slightly downward orientation that some shoulder holster carriers would prefer. So the carrier is entirely relying on the friction-fit retention of the leather holster pocket especially in situations where you might lean forward causing the gun to be hanging slightly upside down. With this exception, the shoulder rig is a solid winner and easily the best part of the Revo System.

Summary of the REVO Holster System

All said and done Urban Carry is a great company that takes care of its customers. Their return policy is stellar. If you are intrigued by the REVO holster system give it a try. If you don't love it I'm sure you will be able to return it. If you carry in a lot of different body positions using a few different guns, you will likely save some money by using the REVO system over a lot of other holster products.

Unfortunately, we found it to be extremely bulky and that was a major deterrent for concealment and there were some other things that were either not thought out well enough or designed with practical application for the real world in mind. Let us know your thoughts in the comments below!

Episode 181: 5 Stories Where “Victims” Refused to be Victims
Why You Really Should Be Conducting a Press Check