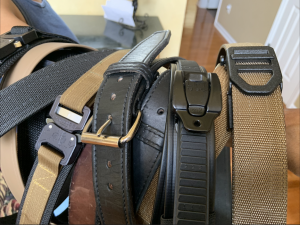 A solid gun belt is important in carrying comfortably and confidently.

When I tell people that a good belt can make carrying a gun more comfortable they often dismiss it. But one of the things that makes carrying uncomfortable is when the holster moves or sags.

Once this happens your gun will inevitably find the most uncomfortable place on your body and bug you. So the solution is to tighten the belt so the holster can’t move and this makes you uncomfortable.

Gun belts are primarily are made of leather or nylon, and each has pros and cons. Leather lasts a long long time, but is heavy, whereas nylon is a lighter material that is more subject to wearing or fraying.

Nylon belts often use Velcro or a clip instead of a buckle that goes through a specific hole so you are not stuck to the 1/2″ adjustment holes. For me, this is what’s driven me to wear a nylon belt like 90% of the time.

I have two ratcheting-type gun belts to review. 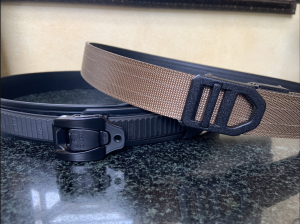 These gun belts from Blackbeard Belts and Kore Essentials use a ratcheting type mechanism that allows you to dial in exactly how tight you want the belt.

The first one is the peacekeeper from Blackbeard Belts. I wasn’t familiar with the company until I was put in contact with them about evaluating their belt design.

Getting around their website is easy and I found they make a couple of different designs of belts and holsters as well. They are located in Oklahoma and their belts are sold in a couple of gun shops across the country.

The second belt is from Kore Essentials. I saw an ad for their belt a long time ago and remember thinking they were just a fashion company that happened to sell an interesting belt design, but not something that would be substantial enough for everyday carry.

Searching around their website you will see they sell some other neat products besides belts, including a slick little wallet. The company is located in La Mesa, California which I know well from working as a police officer in the neighboring city of El Cajon.

Even though the belts both use a ratcheting design, they are actually quite different.

The Peacekeeper gun belt uses a familiar ratcheting design similar to tie-downs that you may have used when securing cargo.

The peacekeeper looks a lot like it is made of leather but it is actually a polymer-coated nylon material. This makes the belt surprisingly light and durable. It comes in black and brown. It’s the standard, inch and a half wide which means it will fit most all pant belt loops.

The buckle part that does the ratcheting works much like the ratcheting tie-downs that you may have used to secure stuff in a truck. The belt is super strong and doesn’t have any roll or sag. These are actually the two things to look for in a good gun belt.

What I mean is that you don't want the top edge of the belt to roll toward the bottom under pressure. If it does, you will quickly find your belt losing its rigidity from everyday use. The tracks that allow the adjustments are on the outside and allow for quarter-inch adjustments.

The benefit in this design is that the small adjustments allow you to dial in how tight you want the belt without over-tightening. Additionally, it will not gradually stretch or loosen up over time. I found myself liking the ratcheting buckle far more than I thought I would. 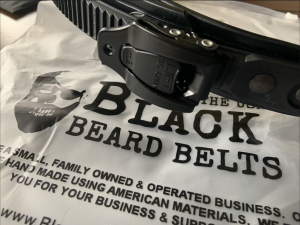 The Peacekeeper is a solid gun belt, comfortable and great for EDC or the range.

I was a bit skeptical about the belt from Kore because the company seemed to be more of a men’s high-end fashion store than a gun gear type store. Even the packaging looks elegant and refined. But I was shocked that the belt looks good but actually is a solid gun belt. You can get the Kore belt in OD green, tan, and of course black. There are several different styles of buckles in different finishes.

I have the X5 style which I think looks nice. And you can choose between either leather or nylon material. I evaluated the nylon belt. Good nylon gun belts are surprisingly stiff. Kore sandwiched what they call a ‘power core’ into the nylon, which you can see in the photo. Like the peacekeeper, the Kore belt doesn’t sag or roll because of this insert. The Kore belt isn't really a true ratcheting system, so I'll explain. 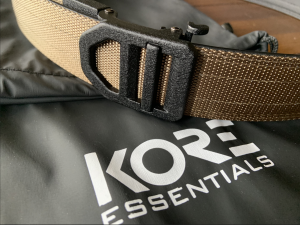 The Kore gun belt is stylish, streamlined and performs great as a gun belt. Like the Peacekeeper, the ratcheting design doesn't force you to pick adjustment holes that may be slightly too loose or too tight.

Unlike the true ratcheting mechanism of the Peacekeeper, where a lever is pulled to tighten the belt, the Kore belt is tightened by pushing the running end through the buckle. There is a tab inside the buckle that locks onto tracks built into the belt.

To release the tension you press a lever on the bottom of the buckle, which unlocks the tab from the tracks. With the peacekeeper you can feed as much of the belt you want to through the buckle before making the small adjustments by pulling a small, ratcheting lever. To release tension with the Peacekeeper, you pull up on a lever in the center of the buckle and it releases the mechanism.

They both are strong and were able to hold my full weight when I hung from my basketball hoop. It is difficult to say which design is better. It really is a personal preference mainly due to the look of the buckle.

When you see the peacekeepers buckle in pictures it looks gigantic, and it is a little thicker than your typical belt, but not nearly as much as it looks. I measured it's thickness at about one and three-eighths inches, compared to the 1 inch Kore buckle. I thought the thicker buckle would be getting caught on things but it didn't.

A concern I had was that it would snag my shirt when I was drawing. While anything that extends out from your waist has the potential to catch clothing when drawing, I performed many draws and did not experience any issues with this.  I carry appendix, and I typically move my belt buckle off to the side as it is so this may mitigate some of those issues. 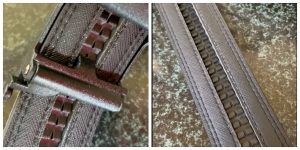 The mechanism in the Kore belt doesn't have any levers to tighten the belt. Rather you feed the belt through the interchangeable buckle.

As mentioned, Kore Essentials put the adjustment tracks on the inside, whereas on the peacekeeper, they are visible. Which one is better? I honestly don’t know nor do I think it makes a big difference outside of a couple of points I noticed.

The tracks being on the outside make the peacekeeper look more tactical or like a gun belt. Whereas the Kore belt looks more like your average fashion belt. You may think ‘unless I tuck my shirt in, what the belt looks like doesn't really matter.'

You would be correct, both belts are solid when it comes to stiffness, keeping the holster snug and staying tight. The difference really lies in the appearance which is truly a personal preference thing.

The second thing I noticed is when removing the Peacekeeper the part where the tracks fasten to the belt, can sometimes catch on the belt loops and snag up. It really isn’t a big deal to me, it just may be an issue with pants with smaller belt loops. 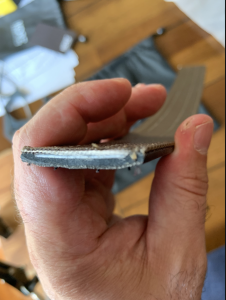 The white ‘power core' in the Kore belt gives it surprising structure and strength.

The materials are different, and here's the thing: I mentioned that the peacekeeper looks more gun belt-ish, but the fact that it looks like leather does make it appear to be a little dressier.

The peacekeeper retails for $89.99 and it also comes in brown. It's the same belt, just a different color and they call it the warfighter. They also make non-ratcheting belts and holsters that are competitively priced.

Kore's nylon belts are only 59.95 and the leather ones are 10 bucks more. They have 4 different styles of buckles and you can just swap them out.

Kore makes these Velcro belt keepers that keep the free end of the belt from sticking out. I almost always forget to put the belt keeper on before I feed my belt through the belt loops so making them with Velcro allows them to be put on afterward, which is great for someone who forgets to do it first.

Both companies are staffed with super nice people. I like to include this in my reviews because I find that given two similar products, I will go with the company that provides better customer service even if it is a bit more expensive. 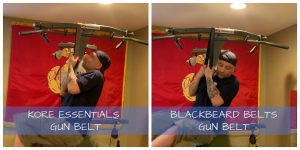 The mechanism on both belts is solid. They were able to hold my full weight without loosening up.

Blackbeard belts offer a lifetime warranty on their belt. Kore Essentials will give you 30 days money-back and then a 1-year warranty.

I find that I almost can’t have too many gun belts. Depending on the type of pants I'm wearing or the gun I am carrying or how dressy I have to be or if I am on the range or not. All these things factor into what belt I decide to wear.

You may not have that issue, because you wear a uniform or always dress a certain way for work, but options are a good thing, especially when you want to carry comfortably. 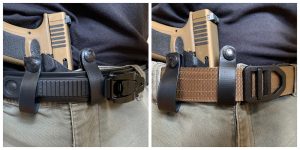 What it really boils down to is your personal preference with the style. Both belts are solid EDC and range belts. Your best bet may be to get one of each.

For me, I will likely use the peacekeeper on the range or EDC with casual clothes. The material is easier to clean than the nylon Kore, and it does a great job of holding the holster or mag pouches etc. I would use the Kore more as my EDC when I am wearing ‘dressier' clothing, or when I may be tucking my shirt in.

I own a couple of non-ratcheting, nylon gun belts that can be adjusted very precisely because they fasten with Velcro. I didn’t know if a ratcheting design that gave me 1/4” adjustments would really make a big difference from using Velcro. But while I wore these belts over the last month, I realized that I would sometimes tighten my belt up throughout the day.

It was really convenient to be able to just pull a lever or push it one click to tighten it up without drawing a lot of attention to my waist.

Either belt is suitable for EDC and it ultimately boils down to the look you want.

If you're looking for more recommendations for a gun belt, check out my top three picks!