Welcome to my Mossberg MC1sc review. What follows are my initial, first impressions of shooting 150 rounds through a gun they sent me. This review is far from over as I plan to shoot at least another 500 rounds of ammo through it. I'll update this article, as necessary.

I was stoked when I heard that Mossberg was going to be releasing their first pistol in 100 years. So stoked, in fact, that it was one of my first stops at the range out at SHOT Show 2019. I asked for them to send me one to do a T&E on, and they obliged.

As of right now I have about 150 rounds of ammunition through this gun, which includes 115 grain Federal Ball, 135 grain Federal Hydra-Shoks, and 115 grain factory reman. Here is my first impression, of an ongoing Mossberg MC1sc review:

I hold the opinion that Mossberg makes great guns. I own a few, and swear by their shotguns. It's a no-brainer to me that they started to make handguns again.

And, while I'm not the only one who is excited for this re-entry into the handgun world, there are also a lot of haters out there. After perusing the Mossberg Facebook page, there are tons of hate comments that, really, hold zero weight. This one, for example:

Is that so? Let's go back to school for a moment, shall we? The first production, polymer, and striker-fired pistol was not invented by Gaston Glock. It was the VP70 put out by HK in 1970. 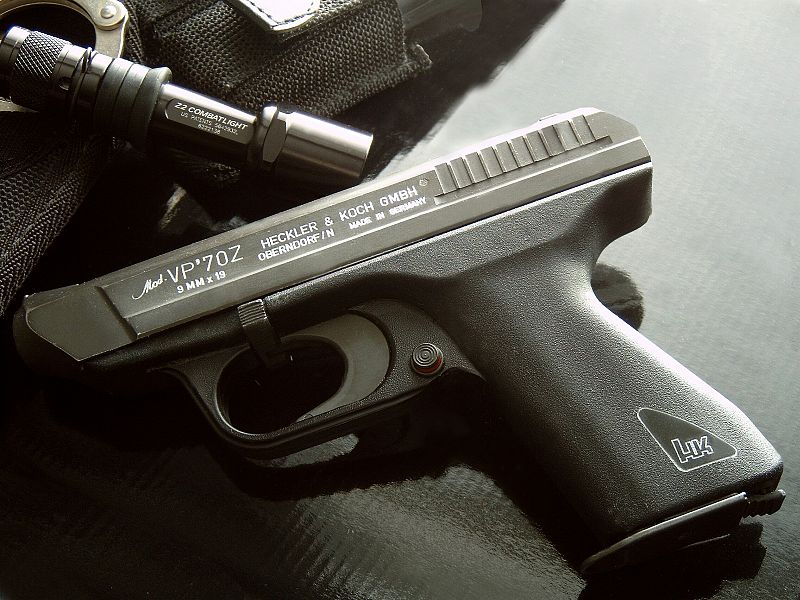 Was the Glock an overall much better gun? Absolutely. LOL, the VP70 was a turd, but it was a necessary step in the evolution of firearms technology. But, my argument isn't necessarily that Glocks are HK knockoffs (ahem), but that there really isn't anything new under the sun.

And, while it is a saturated market, why can't we fit more competition into the mix if it's better and will change the way gun makers build/design guns? The Mossberg is fitted with some great features, and I like it, so far.

Moreover, I bet the other manufacturers are paying attention, too.

So far, as I previously stated, I've got about 150 rounds through this sub compact, 3.4″ barreled gun with various types of ammo. Everything to date has performed as it should, ammo wise, with the exception of a couple light primer strikes in the re-manufactured ammo.

I have contacted that ammo manufacturer who said that they are in the process of switching over to a different primer. So, this is obviously not the gun's fault.

Recoil on the MC1sc so far seems to be very manageable even in this small package that literally fits into my back pocket like it was meant to be there.

It was a nice surprise to see that this little Mossberg concealed carry piece comes standard with options that are considered a premium on other comparable guns. For example, the trigger feels excellent to me.

If there is one thing that I've never really appreciated, it's an overly curved trigger like those found on some of the competition.

Most trigger curves are fine, generally speaking. But, I've got REALLY big fingers. Those guns with excessively curved triggers are harder for me to shoot accurately because my finger doesn't sit on the shoe properly.

What guns do I struggle with in regards to the shape of the trigger? Springfield's XD-E comes to mind right off the bat. Baby Desert Eagle III is another. There is just too much curve there, so a flat trigger on a pistol from the factory is a nice upgrade for me.

This is even truer when you consider the fact that all my guns are stock. I do not modify them at all. If this gun stays reliable, I'm going to buy it.

The trigger also has an integrated blade safety that must be pressed in order for the trigger to move, but to me, the best part is how the trigger feels. The Mossberg website says it's somewhere in the neighborhood of 6 pounds of pull, and I'd say that this feels to be about right.

There is a solid trigger wall that you can get up on with confidence after the initial slack is taken up, and the reset is also just past that point. I'm very impressed with the trigger on this gun that has a base MSRP of only $425.

I have heard reports of folks picking these up for just north of $350 for the base model.

Something that I'm fine with, but others will likely complain about, is the grip texture. For me it's fine, but I've never really been a fan of too much texture. Other shooters will likely stipple or put Talon Grips on it once they're available for it.

Something I think is fantastic, though, is the mag release. Not only is it reversible for south paws, it's also textured and sticks out far enough for people with oddly shaped thumbs to hit.

While on the topic of the magazine release, let's talk about the mags. So far I did full mag drops from shooting height for each magazine change. They're holding up, and they drop out with ease each time.

I bring this up because there was a moderate amount of concern that the plastics used in clear magazines aren't as strong as those used in colored mags, which is why nobody else uses clear magazines.

I have every intention of beating the crap out of these mags for the next 500 rounds and reporting back on it here, in the next update of this Mossberg MC1sc Review.

Overall, this is a great concealed carry gun that doubles as a great shooter. It was pleasant to shoot, and we took it out to 40 yards, hitting a 12 inch plate. Well, I didn't. The guy I was with did. But, that's proof that if you do your part, the gun is more than capable of doing its part.

This photo was taken during my range session. Notice the trigger pin walked out a bit.

Now for the negative. The trigger pin walked out on me as you can see in the picture. Now, I'm not exactly sure when it happened, but I noticed it after the first Hydra-SHOK magazine was ran through it.

It only happened once, and I'm not sure why, but this should not be happening on a brand new gun that I've never taken apart past a field strip to clean the shipping oil off of and put Pig Lube on.

I pushed it back in with my finger, and ran several more mags through it and couldn't get it to happen again. I will be putting about 500 more rounds through this little Mossberg MC1sc to further the review, so stay tuned for that.

I must admit that, at first, I was a little concerned about the different takedown of the MC1sc pistol, but after doing it a few times, I can say that there is no reason for concern. Simply lock the slide back, remove the magazine, make sure the weapon is cleared, push the button on the back of the striker plate, and slide the whole plate downward.

Plate will slide out, then so will the striker assembly

It will slide out. Then, you remove the striker assembly, and slowly send the slide forward with your support hand. In one swift motion, pull back on the grip while pushing forward on the slide and the two will come apart.

To put back together, simply reverse the process.

The model I'm testing comes standard with TruGlo Tritium Pro Night Sights, which costs about $100 more than the base model does. I haven't really done much with low light shooting on this pistol yet, but have hopes to.

That about does it for this initial Mossberg MC1sc review. Make sure you stay tuned as I put a lot more ammo through it in the coming weeks. If you don't want to miss out on it, I suggest you subscribe to our newsletter to get notified of these things.