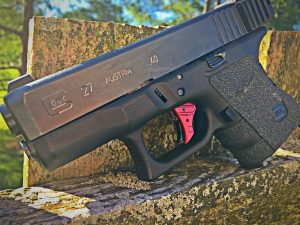 Enhancing your grip doesn't have to be expensive or permanent.

It is my belief that the single most important thing you can do to shoot your handgun well is to have a solid grip. Proper positioning of your hands, along with firm, consistent pressure allows you to manage recoil and shot placement.

Grip technique is obviously critical to managing recoil and putting shots where you want them to go. But there is another component, that can make a huge difference in the ability to shoot well. The surface of the grip of the gun cannot be overlooked. Different grip surfaces can make a world of difference and can aid or hinder a good consistent grip.

There are a host of materials that companies use to make gun grips. Each material has pros and cons and all have a different feel on the shooter's hands. More important than the material used, is the aggressiveness of the grip. Very aggressive grips have a lot of texture and provide traction for the shooter's hands. Conversely, non-aggressive ones are smoother and more forgiving on your palms and fingers.

How aggressive should my gun's grip texture be?

The more texture you can put on your gun's grip surface, the better control you will have over your gun. But there is a limit to how rough you can go, and surfaces that are too aggressive have drawbacks. Shooting a gun with very rough grips while not wearing gloves will result in blisters or hot spots on the hands. Everyday carry (EDC) guns with a very aggressive texture can cause issues. The surface can wear holes in clothes and rub the person's skin raw, especially when carried inside the waistband.

Where you draw the line on how much texture you want on your gun is a personal preference. For owners of guns with removable grip panels, finding one that works for you is not too difficult. Aftermarket companies have been making replaceable grip panels with various textures for years. But buying a polymer gun meant that you were stuck with the grip texture and feel that the manufacturer gave you. Owners who wanted a more aggressive feel had a few options.

One option was to melt a pattern into the polymer grip. This method, called stippling, is a permanent modification of the gun and enhances the texture of the surface.

Another option is to apply a product that sticks to the grip of the gun like a sticker. These are great options for those who may not want to go with a permanent modification of their gun. Or someone who wants to experiment on how much or exactly where they want to have more texture.

Talon Grips is a well-known company that has been producing these applied grips for many years. The company has two variations of their popular product. The more aggressive of the two is a granular material that feels much like skateboard grip tape. The second product is not as rough and has a rubberized feel to it. Both versions are backed with a very sticky adhesive that doesn't peel off, yet won't damage your firearm if you remove it. Because they vary in texture, each has its pros and cons. I have used Talon Grips on my guns, and know a lot of shooters who do as well. 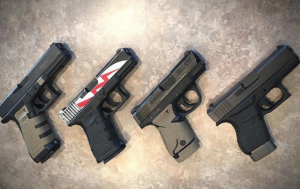 The company makes products for many different gun manufacturers and models.

If you look on the internet, you will find many reviews and articles stating the advantages of using Talon Grips.  How many times do you want to hear someone tell you that they like Talon Grips?  I do like them, but I also know the amount of texture someone likes on their gun is their personal choice. So I decided to present this review in a slightly different way. I won't tell you which one is best for you. Instead …

I'll show just how much grip these two products provide.

First, I placed my Glock 27 in a vise. I used a large, plastic spring-loaded clamp and clipped it around the grip of my gun. I then fastened a force gauge. to the clamp. The force gauge shows how many pounds of force is being exerted. I pulled the gauge with consistent pressure until the clamp slipped off the grip of the gun.

I repeated this 15 times under each of the following conditions:

Each time I recorded the amount of force needed to pull the clamp off the gun. 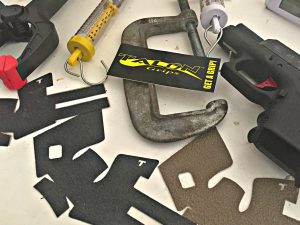 The tools used in this test.

What I found by doing this was a numerical value for the amount of friction the various grip surfaces provided. The highest and lowest readings for each of the three surfaces were disregarded. By ignoring these two values, I eliminated an outlier value throwing the results out of whack. The remaining 13 results were averaged and entered into the table below. 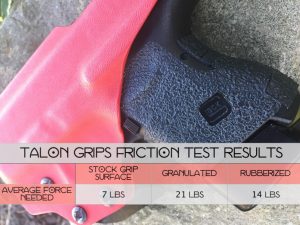 The results of the friction test show how effective both variants of Talon Grips are at increasing the grip texture on your handgun.

As you can see both variations of Talon Grips provide a tremendous amount of enhanced grip surface compared to the stock finish. On average, 7 pounds of force was needed to pull the clamp off the gun with the stock grip. Not surprisingly the granulated grip is the most aggressive, requiring 21 pounds of force on average to remove the clamp.

The numbers alone show that the granulated product requires 3 times more force. Numbers are one thing, but sometimes a picture speaks a thousand words. So check out what the granulated grip looked like after just 15 pulls with the clamp attached. 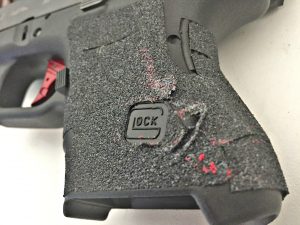 The granulated grips require 21 lbs of force, and this is evident in the damage to the material after repeatedly pulling the clamp off the grip.

The thing that stands out most is the difference between the factory grip and the rubberized Talon Grip. The reason I find this interesting is that the feel of the rubberized grip is not aggressive at all. Some people want more grip, but may not like the aggressive feel of the granulated grips. Testing with the rubberized grip resulted on average of 14 pounds of force to pull the clamp off. This allows someone to double the amount of friction, without drastically changing the feel.

Talon Grips makes two products that increase traction on the grip, but do it in two different ways. This allows the user to select which one works best for their specific application and preference.

Making your grip ‘grippier' is something that nearly all shooters can benefit from. The only question is how aggressive do you want to go, and if you want to permanently modify your firearm. With the variations Talon Grips offers, you can get the feel you want at a reasonable price, without doing any irreversible work on your firearm.

18 Responses to Talon Grips Review | Do They Actually Help?