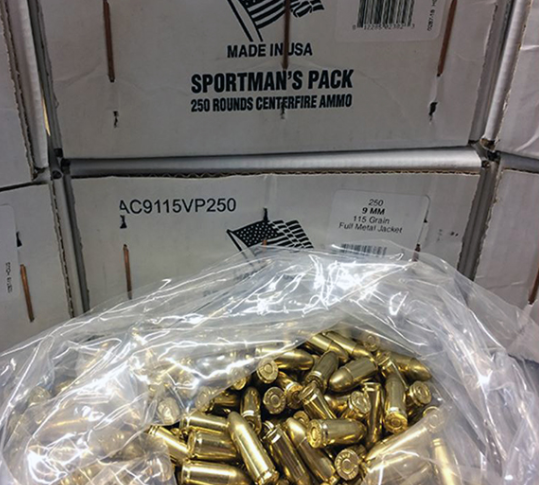 Truth be told, you can never have too much ammunition, and the recommendations that you stock 1,000 rounds of ammunition per gun are very conservative.

I actually recommend you stock as much ammo as you can safely fit in your house.

Let's discuss why you should have more ammo than you currently do, and debunk the “too much” myth all at the same time.

The truth of the matter is that when you buy ammunition in large quantities it generally saves you money. If you know for a fact that you're going to need so much ammo to practice with, anyway, you may as well get it for as cheap per round as you possibly can.

When you buy in bulk, starting at 500 rounds and going up from there, it saves you money. That's usually how it is with anything you can buy in bulk. We've got a horse that's like an extra four mouths to feed. It's actually cheaper if we buy her hay and medicine in bulk, as opposed to just one week at a time.

Buying bulk ammo is one way to combat the high cost of training, which ultimately brings me to the next point …

Hopefully this is obvious, but the more ammo you have that you can acquire at a cheaper price, means that you'll be able to train that much more.

Proper training and gun handling is important for any of us who take self-defense seriously. We should be training at regular intervals, to include dry fire practice and live fire at the range.

Ammunition is actually a commodity. Something you may not know about commodities is that price usually fluctuates based on economic, political, or availability reasons. It's always better to buy something when it's cheaper, than when it's more expensive.

Usually, when there is no perceived threat to the Second Amendment, the price is more stable and ammo isn't flying off the shelves. However, once that perception changes, like when Barack Obama was president, ammo was more expensive and harder to find.

Because of this, it's always recommended you buy ammunition steadily while in a downward priced fluctuation.

You're never guaranteed to be able to find your chosen caliber of ammunition. This is one of the reasons why I always recommend people to own a similar handgun in a different caliber. For example, if you're a G26 guy, you may also want to get yourself a G27.

Because 9mm is so popular, it will sell out faster in a political or scare craze. That's just the way it is. But, the G27 is a nearly identical gun, minus the fact that it's a .40 caliber (that link, by the way, goes to an article I wrote considering if 40 is dead). .40 is nowhere near as popular and won't sell out as fast in the stores.

A few years back when President Obama was in office, certain calibers of ammunition were very hard to find, 9mm and .22lr were on that list. I thankfully had a gun in .45 ACP (Springfield XD MOD.2) which took a bit longer to sell out.

I also had a .40S&W gun, a Baby Desert Eagle III, that I was also able to buy ammo for. The .45 eventually went scarce, but every time I went to the store they had .40 ammo.

If there is one thing we can see by looking out onto the political landscape, it's that the gun grabbers are trying to do all they can to make it so we can't have our guns.

Certain areas are trying to tax ammunition into oblivion, and they don't believe that the Second Amendment applies to ammo. It does, but that can be a story for another day.

Suffice it to say that just the political landscape by itself is enough for me to stock as much as my house will contain. At the end of the day, you just never know what tomorrow will bring.

Don't listen to the hype. You don't own too much ammunition, nor can you ever have too much. There's no such thing. Stock up so you've always got it. We usually recommend Ammo Supply Warehouse for bulk ammo from name brands.