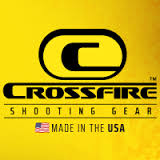 Crossfire Shooting Gear is an American company which makes holsters and some other shooting gear products.  Crossfire Shooting Gear makes several different styles of holster.  They sent me three models  to do an honest review and give my impressions.  The models I tested were The Grip low profile IWB holster, The Tempest comfort concealed carry series and their newest design, The EDC low profile IWB holster.  Like all my holster reviews, I spend a considerable amount of time using the holster under everyday use.  I also draw from the holster repeatedly, in order to simulate typical usage and help identify any potential design issues.

Below is my more complete written review of each holster and then at the bottom of this page is the video.

The Grip holster:  The Grip holster is an IWB holster that is designed to be very low profile.  It is a universal fit holster, made of nylon material with a memory foam core.  The holster is coated with a rubber material that keeps the holster from moving when placed between the wearers body and belt.  It comes in two variations, one with a 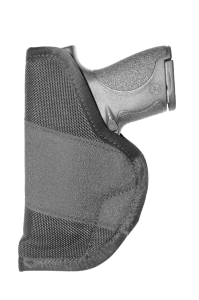 metal spring type clip and one without.  I tested the version without the clip.  I was initially skeptical of this holster because of two reasons.  I typically do not care for universal holsters.  I would prefer a custom holster fit specifically to my model of firearm.  Surprisingly, my Glock 27 fit like a glove in the holster and I felt like it had exactly the right amount of retention.  Obviously guns vary slightly in size, but during this test I was extremely happy with the fit.  Secondly, I have never used a ‘sticky' type of holster, i.e. one without a clip or loop that fastens to the belt.  I know ome people rave about them, but I was always worried about the potential for them to move or fall out of my pants, and worried about the holster coming out with the gun with my draw.  I wore the holster in my usual AIWB position and the gun stayed put throughout a vigorous testing.  I ran, bent squatted and went about my usual daily routine without the holster moving at all.  Admittedly I did not get into a fight with anyone, and that would really be the likely scenario that I could envision the lack of a clip potentially becoming an issue.  But, you can get this holster with a metal spring clip, which may put those fears to rest.  As far as drawing from the holster, I couldn't have been more pleasantly surprised.  Like I mentioned, I was leery about a holster that used friction to stay in place, especially when drawing.  I replicated at least 100 draws from different positions and not once did I have the holster come out along with my gun.  Is there a possibility that it may under a circumstance I was not able to replicate…sure.  Is this a deal breaker…it is up to you.  The holster is extremely comfortable and very low profile.  The materials and construction seem top notch as well.  As ‘sticky' type holsters go, I think this is a solid performer. 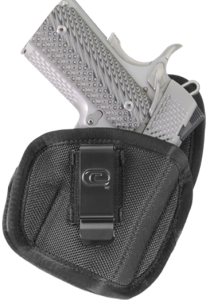 The Tempest holster: The Tempest holster is a universal-size IWB holster that is designed to be to be comfortable even in hot weather.  The holster is made of ballistic nylon that is hardened and shaped around the gun.  This allows the holster to keep its shape even without the gun inserted, which is good for re-holstering.  The backing of the holster is made of a ‘comfort panel' which is covered with a mesh-like material that does feel comfortable and is not as hot and sticky as more commonly used neoprene or leather backings.  I tested their micro-compact sized Tempest Holster with a Beretta Pico (one of the smallest semi-autos).  It fit superbly with adequate retention.  It is fastened to the belt with a steel spring clip.  While these types of clips are not my most favorite fastener on holsters, the clip did have plenty of retention and was a good quality.  Overall the comfort was terrific and the fact that it keeps its shape even without the gun inserted was a plus.

The EDC (everyday carry) holster: The EDC holster is the newest holster design from Crossfire Shooting Gear.  It is an interesting concept and something that is worth investigating.  The EDC is designed to be an IWB holster that is similar to The Tempest, but has a kydex shell.  Nothing really earth shattering there, but what is different is that the EDC is a universal holster, designed to fit multiple guns.  So that may be it's unique appeal, other than having the same extremely comfortable ‘comfort panel' backing as the above mentioned Tempest holster.  I tested out the gun with a Glock 27, a Glock 19, and a Canik Shark-C.  These guns are similar in size, but by no means exactly the same size or 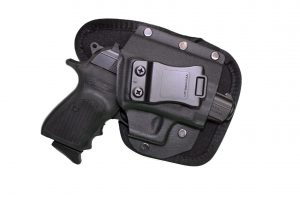 dimension.  What I found is that all three guns fit the holster and had surprisingly good retention.  This is due to the fact that the EDC uses the area around the trigger guard as primary retention (which accounts for about 80% of any kydex holsters retention).  So I felt like the gun was not going to come out of the holster without a deliberate action.  I did find that because the holster is designed to fit different sized guns, that there was some shifting of the gun inside the holster.  Not where the holster held onto the trigger guard this area stayed put.  To better explain it, think of the trigger guard as a pivot point and the gun being able to pivot slightly (about 1/2″ to 1″ or so) around this point.  This would be a give and take in my opinion.  It is a great universal holster if you own many guns and don't have the budget to buy several different holsters, but the slight pivoting movement is something to consider.  Overall I don't think it would be a deal breaker, because the holster did have solid retention none of the guns I tested in it felt like they were at risk of coming out of the holster.  And as mentioned, the holster is super comfortable.

Gun Safety as a High School Elective?
Episode 103: The 1911 and Glock Got Together and Had a Baby