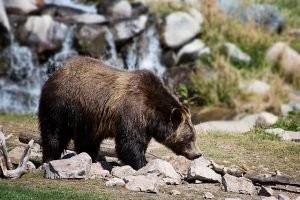 Every so often we hear stories of folks who had to defend themselves against the four-legged predators most of us don't think about for our everyday carry gun options. And oftentimes, people have a skewed thought process of what is acceptable for defense against an angry animal, like a bear, moose, elk, and others.

Before we move on I want to tell you a true story of a time when I was closer to a big black bear than I should have been about 17 years ago.

I had just gotten out of my beloved Marine Corps and was still relatively in shape. My last year was spent in Okinawa and the stories you've heard about there only being so many things to do there are absolutely true. Everyone either turns into a bodybuilder, a drunk, or a diver.

I found myself at the gym twice a day and I ran there from the barracks. This afforded me with massive muscles with enough stamina to still pass the physical fitness test and its 3 mile run. I don't remember most of my measurements but the 54″ chest stands out in my memory for bragging rights.

The point to me telling you all of this is because after I got out and made it back home to crusty old New Jersey, I still kind of wanted to be in shape.

I mean, I was single. You know?

When I say “New Jersey,” I'm not talking about what everyone thinks about with sky scrapers and traffic. I grew up in the middle of the woods in NW Jersey on a dirt road. There was wildlife everywhere, including big black bear.

They got enormous because, when I lived there, you couldn't hunt them and there were no natural predators and plenty of food.

One day I went on a run on a local trail we called the railroad bed. After exiting the woods and coming up to the main road from the trail head, I saw a big black bear standing in the middle of the road.

It was probably 350-400 pounds, and on all four feet. It was pointed away from me to the other side of the road and heading into the woods.

It turned around and looked at me as I stood there trying to work out what I would do to protect myself if needed. I had nothing on me. I was strong and faster than most people, but certainly not an angry bear.

Thankfully I didn't see any cubs, and he clearly was NOT angry or this would have ended a little different. We made eye contact for what seemed an eternity (likely just a few seconds but I had tunnel vision). Suddenly the bear let out a loud puff of air, turned its head back in line with its body pointed away from me, and lumbered up into the woods on the other side of the road.

I stood there for a few minutes collecting my thoughts, careful not to run again in case it was still watching me. I was still about a mile from where I lived.

I don't remember much after I got home, but I suspect it included checking my pants to make sure I didn't drop any deuces during the ordeal.

While a black bear is generally not aggressive toward people unless it feels threatened, these things can happen, and black bears are really just one of the big animals that are capable of ruining your day.

Of course, you may not have need in your area, but if you do, you'll want to be able to defend yourself properly.

Here's a podcast about defending yourself against a bear:

You'll want to give this a lot of thought if you find yourself outside in an area where there are big animals who might want to eat you or at least protect their young or territory.

Bear spray is an option for those of you who value the animal's life more than your own.

I'm actually not a big fan of bear spray for a couple of reasons. While I think it can work to stop an angry bear, I think it can also do the exact opposite. It could piss the bear off even more ensuring your exit from this life.

To make matters worse you could also take yourself out of the fight if things escalate even more and any of that stuff lingers or the wind changes direction.

While I've never been sprayed with bear spray, I have been peppered and gone through the gas chamber in the Marines. I'd take the gas chamber over the pepper spray any day, and if bear spray is going to work on a bear it has to be strong.

Because it has to be strong, if it does end up on your face it's going to suck. Big time.

So, I'd rather have a gun. Shocker, I know, being that I'm the editor of this fine publication that has to do with guns.

This is tricky, though. I'm a fan of big caliber, fast moving, hard cast bullets meant to get deep into whatever wants to eat me. It's tricky because most people don't have this type of gun on hand.

The key here is that any handgun in whatever caliber, and whatever cartridge, is better than nothing. The last thing you want is to try to defend yourself with a stick or knife. At that point in the fight, your life is basically over.

I mean, don't give up or anything, but don't expect victory at this point, either.

If you're being charged by an angry animal you want to stop it as far away from you as possible, within reason (I mean, you actually want to be able to hit the thing).

The number one thing to remember here, is that using hollow points like we recommend on two-legged predators, is not the best idea. You don't want to use hollow points against a bear because, while they might work, they don't penetrate deep enough into the animal like ball ammo does, and preferably hard cast.

Don't get me wrong, here. If my only options were to shoot the bear with the 13 hollow points in my 365XL or poke it with my walking stick, I'd take my chance with the gun.

But what if you have to defend yourself against a human OR a bear in the woods?

There are a couple of options here. First, is to carry two guns when you go on a hike. This is what I do depending on a few other circumstances that aren't important to discuss right now. I'll carry one of the handguns in a chest or shoulder rig, and the other one on my hip.

I live in bear country in the Blue Ridge mountains and the bear population here is massive. When hiking you have just as much of an opportunity to see a bear as you do other humans.

I'm prepared for both.

Another option is to just carry a gun with ammo you hope will take care of both. You have to weigh your circumstances here. Do you think you're more likely to encounter a bad guy or an angry animal where you're at?

If you're more likely to encounter one over the other, carry the one you think will work best.

I like the two gun option better because you just never know.

Other people I know will alternate rounds. The first shot will be a hollow point, the next will be a hard cast, so on and so forth.

I don't really have many thoughts about this. If you have anything to say, the comments section is where to do it.

At the end of the day only you really know your circumstances. If you want to carry bear spray, it's ultimately your choice. I wouldn't carry it, personally, but to each their own.

What is your setup for when you're in the woods? Let us know in the comments below.

Episode 443: Our Take on Kenosha
What About A Truck (or Car) Gun For Self-Defense?

9 Responses to Considerations For Self-Defense In The Great Outdoors