Join Our Newsletter
Shop Our Store
MAIN MENUMAIN MENU
By Eve Flanigan on October 25, 2018 in Gear 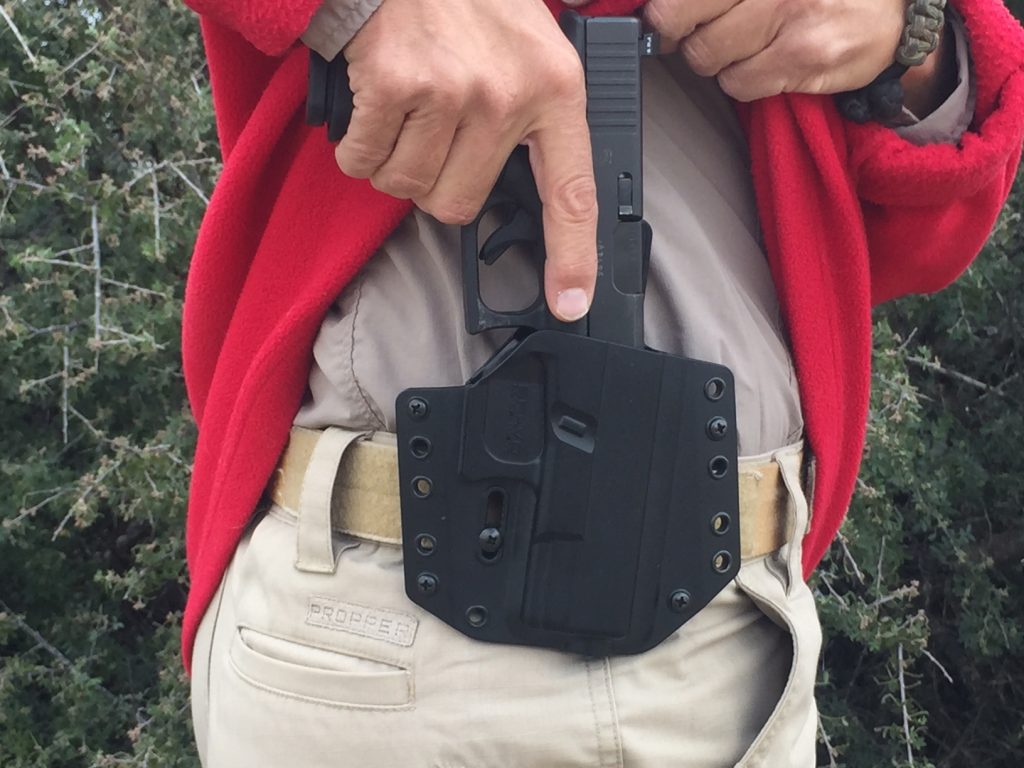 Bravo Concealment lightens it up with the 3.0 version of OWB holster

Bravo Concealment, a Texas-based producer of Kydex inside- and outside-waistband (IWB/OWB) holsters made with concealment in mind, just rolled out a new interpretation of their OWB model, called the 3.0 OWB Gun Holster.

This holster has a smaller footprint than the company’s existing OWB design, with material trimmed off the bottom corners as compared to the original. It’s a less bulky fit that’s definitely easier in tight quarters.

Another new feature is adjustable, locking retention. A single screw customizes retention and keeps it where you want it. Also adjustable is the traditional Bravo 10-degree cant; in fact I adjusted the test copy to be an easier, straight draw as I’ll be using this holster for range work and not concealment with a Glock 19.

Another significant change is in material. The 3.0 is made from what the company describes as “diversified polymer plastic,” which does feel a bit more rigid than the original OWB holster I own. However, the reduced size of this one makes flexibility less important. This material is claimed to have superior impact resistance as well. Time will tell how it holds up to UV rays; one of nature’s primary destructive forces where synthetic holsters are concerned. 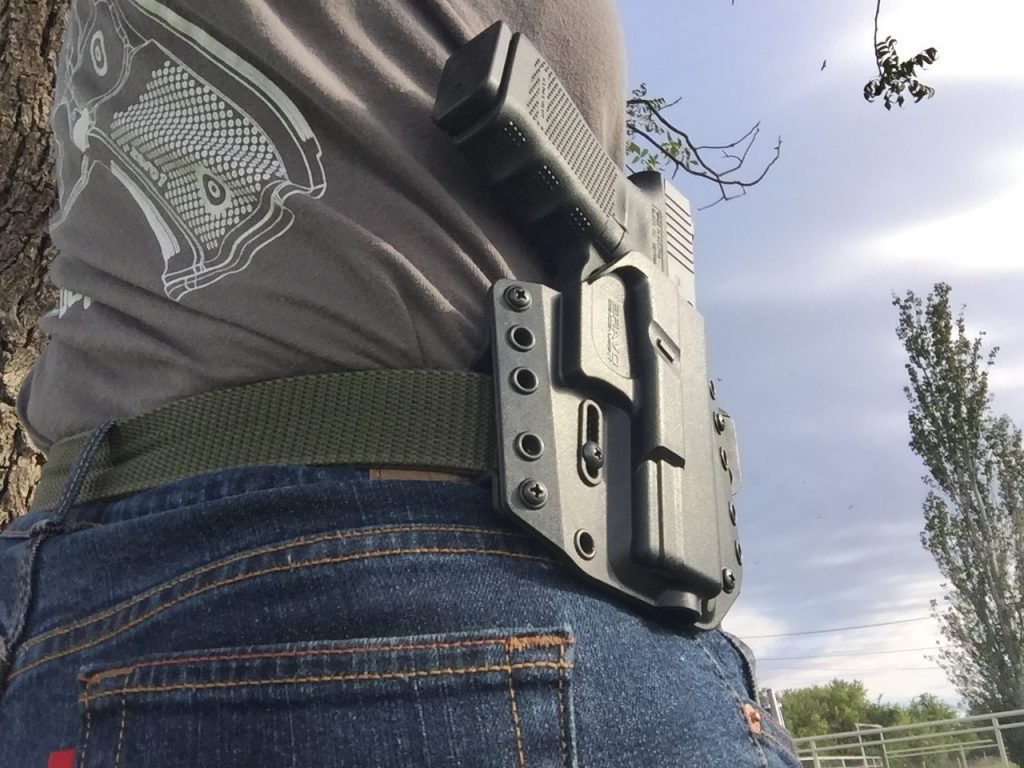 Standard on the holster is an RMR cut-out, 1.5-inch belt loops with other loop options available, and room for a threaded barrel and tall sights. Indeed, my Gen 4 Glock 19, outfitted with suppressor-ready XS F8 night sights, fits perfectly into the 3.0. Please note, this holster is not a fit for several Gen 1-2 Glocks.

Like its predecessors, the Bravo Concealment 3.0 OWB fits tight to the body, making the gun concealable for many people. This is the only holster I’ve found so far in which I can conceal a Glock 19 under a bulky sweater or jacket!

I found the low-profile fit to be good for more than just concealment. I wore this holster during a half-day carbine class. At first, I found it distracting to have the grip in contact with the inside of my elbow. But once I was involved in class activity, that ceased to be the case, and in fact I it was nice not to fight any holster-related discomfort when on the ground, and generally have it out of the way, never interfering with the rifle sling. 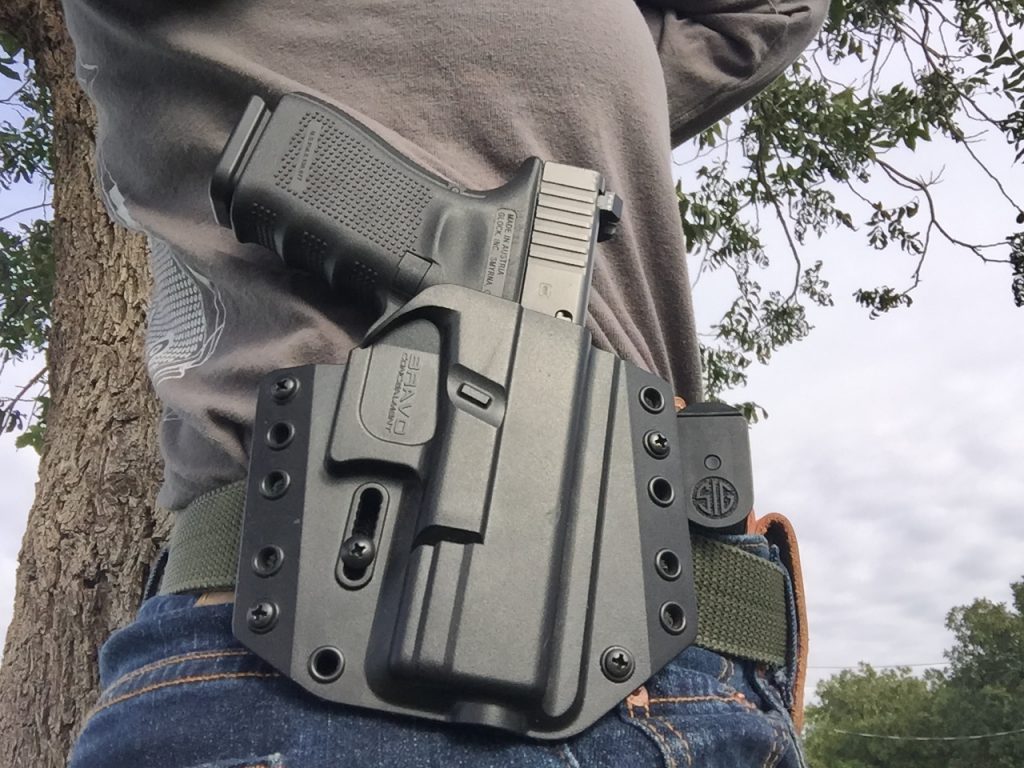 Drawing and re-holstering the pistol, worn in the zero-degree cant position, proved more comfortable than with most other close-fitting holsters. Retention was, to my mind, perfect just as it arrived in the mail. There’s not a bit of play in the holster but it’s smooth on the draw.

This is a very good, quality holster that presents a great option for OWB carry under a loose covering garment, albeit for a limited range of guns. Currently it’s only available for Glock models 19, 19X, 23, 32, and 45. Black is the only color; as with gun choices hopefully more will be available from Bravo Concealment in the future.

The Bravo Concealment 3.0 OWB is priced at $57.99 for the holster alone. Package deals are also available. Let us know your thoughts on the new Bravo 3.0 holster in the comments below.

Barrel Blok – Everyone Should Own This Tool
Episode 267: Is Your Neighbor a Threat??