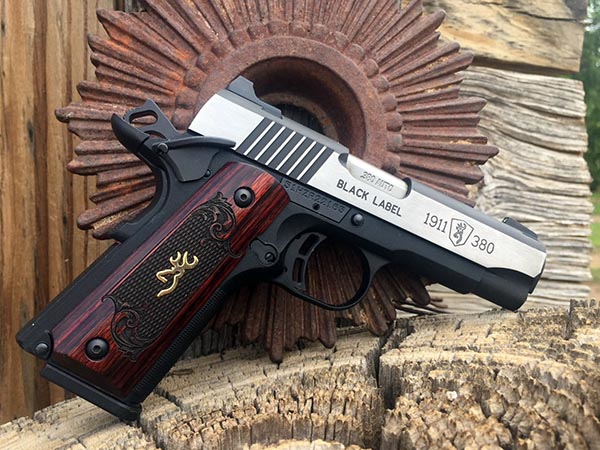 The sexy, reliable Browning Black Label Medallion Pro compact offers a lot for both the concealed carrier and the 1911 enthusiast.

John Moses Browning famously crafted the handgun we know as the 1911. Did you know he’s also the mastermind of the cartridge most carried by civilians, if we consider carry as a global activity? That’s right, the .380 ACP is a Browning creation. But only recently have these products merged. The Browning Medallion Pro 1911 compact isn’t the first mini-1911 on the market, but it’s by far the most accurate, and I think most becoming, interpretation of the platform for the purpose of concealed carry.

The Black Label Medallion Pro compact is one of the latest in a 1911 380 ACP series of handguns rolled out by Browning. All guns in the series are built on an 85 percent scale compared to a traditional 1911 chambered in .45 ACP. The compact version goes a little smaller on the barrel, with a 3-5/8-inch barrel instead of the 4-1/4-inch one found on the non-compact 1911 380 guns.

The Medallion Pro compact, and others in the product line, are built to look and function just like a full-size 1911, with a couple exceptions. The grip angle is the same. The checkering on the front and back straps is finely detailed. There’s a standard grip safety and a thumb-operated slide safety, ambi in this case. A set of rosewood grips and a polished slide add elegance. Slim, metal magazines, two included, hold eight rounds.

But that frame—it may look like steel, but it’s a departure from tradition. The frame is 7075 aluminum. The trigger guard is a composite material. Those may sound like negatives at first, but this gun is light, just 16 ounces unloaded. In the time I’ve been using this little shooter, the composite material has shown no weakness and has proven easier to keep fingerprint- and dirt-free compared to most steel finishes. That perfect checkering is from a mold; the trigger is a lightweight alloy of some kind. 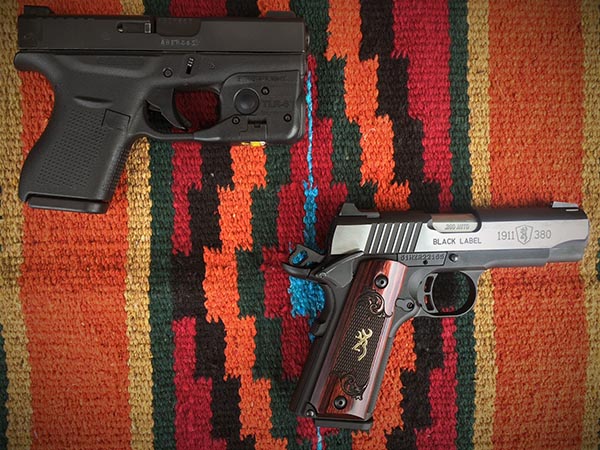 A Browning Black Label Medallion Pro compact and a Glock 42 for comparison. This true-to-form 1911 really is compact!

Also impressive is this pistol’s reliability. In a test of over 240 rounds using eight different ammo brands, it has yet to malfunction. Some test days were windy and dusty; the kind of days I’ve come to expect to cause firing stoppages in full-size 1911s thanks to built-up gunk clogging the platform’s famously tight tolerances. It’s my theory that the lighter components add some forgiving qualities to this gun—a very good thing in a concealment pistol that’s likely to be exposed to lint, pet hair, and whatever else the daily carry environment has in store.

People who prefer an easy-racking slide should take notice; this little gun has perhaps the easiest, smoothest rack I’ve felt.

The skeletonized trigger has a light, 3.78-pound pull as measured by my Lyman trigger gauge. It operates like any good 1911 trigger, with a short trip from beginning of press to reset.

As if all of the above isn’t enough to make a shooter fall in love, this charming (well, there’s a word I’ve never used to describe a firearm until now) 1911 is topped with a set of steel sights, dovetailed in and highlighted with tritium inserts. The sights are low-profile but very visible in dark conditions. 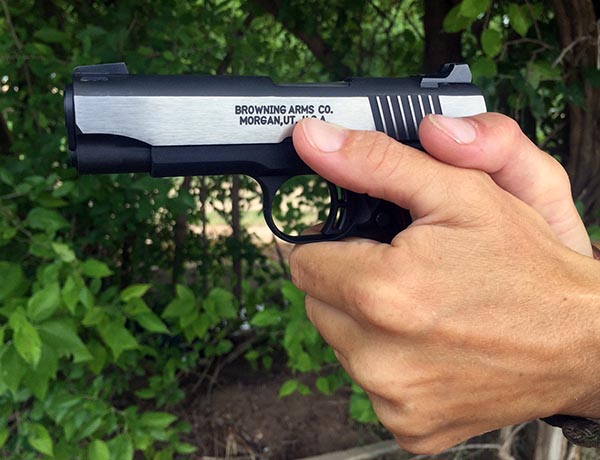 Though small, the Medallion Pro compact takes up the hand well and is easy to shoot at any typical pistol distance.

My only beef with this platform is one that won’t be shared by everyone, but here it is: The gun has a magazine disconnect and cannot be fired without a magazine inserted. Want to dry fire? Load up with snap caps.

While my experience will not be everyone’s, I am only able to fire this gun with my thumb below the slide safety while using a firing grip. My non-fleshy palm lightens enough to disengage the grip safety if my thumb is riding above the slide safety. This is a problem that’ll be familiar to fellow members of the hollow palm tribe—which I’m convinced is even a smaller tribe than left-hand dominant shooters.

A selection of both IWB and OWB holsters, for the 380 1911, in leather and Kydex, are available from Browning. It’s good to see some OWB models; I have a feeling a lot of new owners of this attractive gun will want it to be seen.

The Browning Black Label Medallion Pro compact isn’t cheap with an MSRP of $799. That price is reflective of the gun’s performance combined with plenty of flash. Locally, I’ve seen it for just $50 less.

Browning did right by its namesake in creating their 1911-380 series. By making a true, not cartoon-like interpretation of the 1911 platform like some other companies have done, they also did right by users. This is a great little gun for carry and light range use, certain to be the pride and joy of its owners.

How To Train If You Don’t Carry With A Round In The Chamber
What does Supreme Court Justice Nominee Brett Kavanaugh Stand For Regarding the Second Amendment?