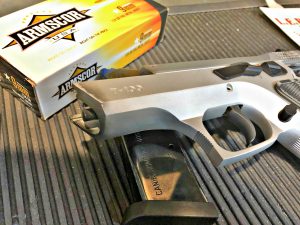 The 9mm Tristar T-100 is a subcompact DA/SA workhorse, with style.

Sorry, this isn't a gun review of a Glock, S&W, or Sig. If you are like me, prior to a few years ago, the Tristar T-100 is a gun you most likely haven't seen or heard of. But its obscurity says nothing of its kick-butt reliability, shoot-ability, and appearance.

Tristar Arms, and Their Line of Handguns:

The company is a Missouri based company that is known for producing a slew of high-quality shotgun models. In addition to shotguns, Tristar's lineup of handguns is broken into 3 series, designated ‘C', ‘T' and ‘P'. Within each series, there is a subcompact ‘100 model' and full-size model ‘120 model'. The only outlier is the S120, which is the full-size version of the C-100. 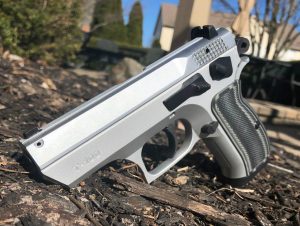 Based on the DA/SA CZ75 design, this T-100 has great ergonomics.

The Tristar T-100 is essentially the same as the Canik Shark-C. This is not a coincidence since both guns are produced in Turkey. Tristar brands them and sells them in the US market. The T-100 is considered a ‘clone' as it incorporates aspects of several other brands. Appearance wise, it looks similar to a Magnum Research Jericho Baby Eagle. or EAA Witness. Functionally is the same as the popular CZ75 Compact. In fact, there are several parts that are interchangeable between the T-100 and CZ75 Compact. 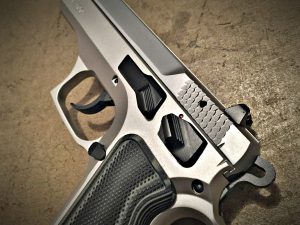 Like all the guns in the Tristar lineup (besides a .22LR TXI handgun) the T-100 is chambered for 9mm. Because it is based on the CZ75 Compact, many users will be familiar with its double/single (DA/SA) action design. The initial double action trigger pull is smooth and consistent without any gritty feel. However, it is long and definitely heavy, around 15 lbs. The single action trigger is fairly short, light, and crisp at about 5 lbs.

The trigger reset is quite long, but not unusual for a DA/SA trigger. It has a large slide stop/takedown lever, and a manual external safety. It's important to mention that the external safety is not a de-cocker. So the gun must be manually de-cocked. Disassembly and reassembly are also the same as the CZ75 Compact. Which is very simple. 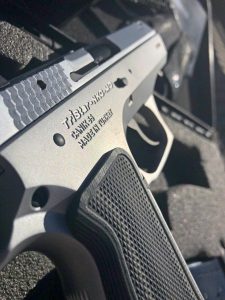 Both Tristar and Canik produce their guns in Turkey. Tristar brands them with their name and imports them to the US.

An aluminum-alloy frame is combined with a Cerakote steel slide. The T-100 comes in black, and if you can find one, aluminum like the one I have. Once taken apart, you will find a steel guide rod. I appreciate that they don't skimp out with a plastic guide rod like some other companies. A terrific design feature of the T-100 is that the slide rides on rails that are integrated the entire length of the frame. This design allows the slide to fit tighter to the frame, creating a smooth recoil and a durable gun. And while we're talking about the slide, it's thin. This makes for a low bore axis and helps reduce muzzle rise by transferring the recoil straight to the rear.

It comes with 3-dot sights, which are better than plastic factory Glock sights but are nothing to write home about. Aftermarket sights are hard to find but there are a couple options out there if you look hard enough. The factory grip panels are black and have a checkered pattern. I found that they didn't provide the texture I liked and swapped them out with some Lok Grips.

If you want to swap them out on your gun, CZ75 Compact grips are an exact match so you have tons of options. The magazine release and external safety are set up on the left side, sorry southpaws. The safety is large and easy to operate and the magazine release is a good size and responsive. The slide stop, which also serves as the takedown lever, is large making it easy to use.

The T-100 specs are surprising when you compare them to two well know handguns.

A couple measurements I find extremely helpful is the length from the bottom of the magazine to the top edge of the slide. This measured 4.9 inches. The other is the distance from the backstrap to the trigger, which happens to be 3″ exactly.

I have had this gun for several years now, and only now getting around to doing a review. Over the years I have put a few thousand rounds through the barrel. I have to say, I enjoy shooting the gun. It has the same outstanding ergonomics as the loved CZ75. It's been a rock solid performer as well. I've fed it junk FMJ and expensive HP ammo, and it ran like a champ with all of it. The only hiccup I had was when the screw that holds the trigger bar spring loosened up. It was a simple fix and has never been an issue since.

The slide is rather small, but the fish scale serrations at the back of the slide allow exceptional grip for racking. Even though I would prefer some nicer sights, the factory ones are dead on. The gun is extremely easy to control and accurate. I have had several students shoot the gun, and I've yet to find one who can't shoot it with great accuracy. 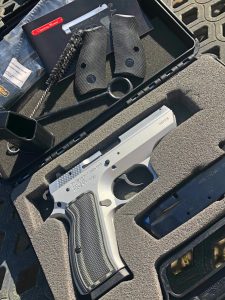 I have owned this T-100 for about 3 years, shoot it a lot, and it has performed flawlessly.

For shooters that are used to a single action or striker fired guns, the trigger is going to take some time to master. Like I said, the DA is long and heavy, but because it is consistent and smooth, it is quite predictable. There are all kinds of aftermarket, spring kits that can drastically change the feel of the trigger.

The T-100 is a surprisingly reliable and fun gun to shoot. Recoil is diminished with a lower bore axis and with some aftermarket grip panels, you can get a great grip on the gun. Its weight and size are perfect and aesthetically it's a beauty. It comes with two 15 round Canik magazines, a cleaning kit and hard case. Tristar even throws in a plastic speed loader which is rare to see. If you look around you can probably pick one up for around $375, which is a steal of a deal for this gun.

There are things to consider before you go out and purchase a T-100. First, although it is compact and light, you may pass it over as a concealed carry gun because of its obtrusive safety and takedown lever. Furthermore, it has no tac rail. If you want to install a light, you're not going to be able to easily make it work. Another thing is those mediocre sights. There are some options for upgraded sights, but not many. 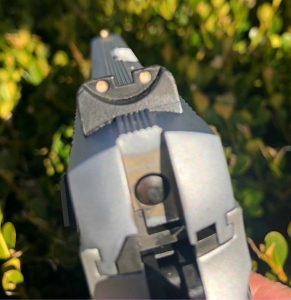 the factory sights are better than cheap, plastic sights used by other companies, but nothing remarkable.

Some people may not like the idea of having to manually de-cock the firearm, and prefer a de-cocker. That is understandable, but personally, I don't find it a particular issue.

If you like molded, Kydex style holsters, it can be tricky. Because its shape is not exactly a CZ75 and not exactly a Baby Eagle or EAA Witness, those holsters don't match exactly. If you can find a company that makes a holster for a Canik Shark C, you'll be in business, but that can be easier said than done.

I love the aluminum-alloy look, but it can get dinged up pretty easily, so be cautious. And while the dimensions of the gun are small, I find the distance from the backstrap to the trigger a bit long. That coupled with a wider grip area, makes it a challenge for shooters with small hands. If you do have small hands (like me) you will likely have a little difficulty reaching the magazine release, safety and your trigger finger won't make contact with the trigger where you ideally want it to.

All the small hand stuff is a bummer for me, but it doesn't mean I can't shoot the gun accurately. It just took me some time to figure out how I have to adjust my grip and trigger squeeze to shoot this gun. Not unlike adjusting from a revolver to a semi-automatic.

If you take the plunge on this relatively unknown firearm, let me know what you think. I Don't think you will be disappointed. If you liked this article, make sure you read this next one by Matthew discussing why anyone “needs” and AR-15.