A twitter poll was recently taken by Senator Swalwell out of California where nearly 80% of those polled said they loved their guns more than children. Here are the results: 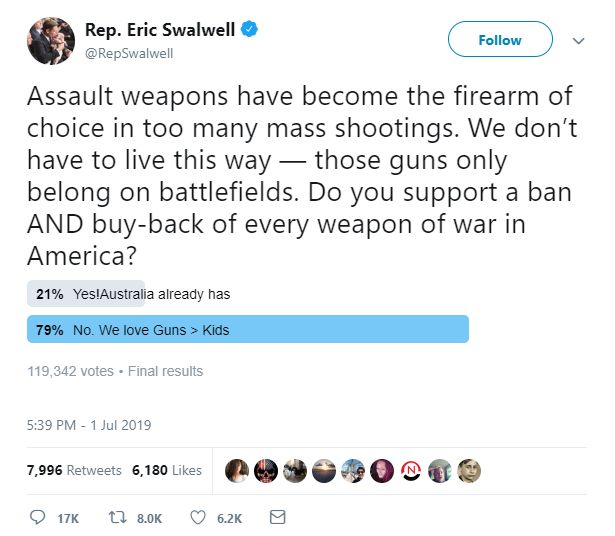 Of course, this was a loaded question and something he was trying to manipulate with the chosen answers. Nobody in their right mind loves guns more than kids. In fact, I'd argue that because I love my kids I own guns. To protect them.

Also, I teach them gun safety so they know what NOT to do when at a friend's house or anywhere else they may happen to come across a gun. But, back to the topic at hand.

Teaching children about gun safety is common sense, while sheltering them is idiotic, but that can be a topic for another day.

Swalwell was trying to troll the Twitterverse, and 80% of the voters decided they'd troll him right back. It backfired, big time, and I'm glad it did.

What exactly is a weapon of war? Just so we're all on the same page and can take our arguments to the bank with people wishing to strip us of our rights, a weapon of war, in modern terms, is a rifle that is SELECT FIRE.

Rarely are they (the rifles) semi-automatic.

A select fire rifle is one that has a burst rate of fire, such as my old M16A2 with its 3 rounds fired per one trigger pull, or a fully automatic rate of fire. Yes, they also have a selection for semi-auto, but that's not the distinction. The distinction is that fully automatic firearms have been banned for years to civilian use unless serious hoop jumping is done.

A weapon of war, if we're talking about the Armalite Rifles developed by Eugene Stoner in the 50s, has the capability to fire MORE rounds, faster, than your traditional AR-15 sold in the civilian market does.

Then again, my 1911 is technically a weapon of war, so are the Beretta 92 sidearms, SIG P320s, Remington 870 shotguns, Pennsylvania Long Rifles, Brown Bess muskets, and so many others that are not the topic of this debate.

The strange difference is that those guns were actually used in war, helped win wars, kill enemies, and yet are NOT, supposedly, the topic of Swalwell's tweet or other gun grabbers.

Or are they? I guess time will tell, but let's continue to fight the good fight.

Episode 331: Getting Started in the Firearms Industry
Gun Buying Tips For Those With Weaker Hands

38 Responses to No, We Don’t Love Our Guns More Than Kids