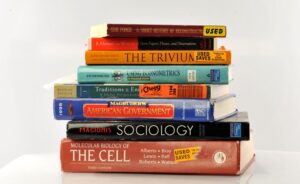 In a recent day to the range, ConcealedCarry.com decided to answer a question that when revealed led to some results that we did not expect.

School shootings are one of the most fearful and persistent thoughts that go through our head. Whether we are parents, students, or teachers ourselves, the idea of a heavily armed and highly disturbed person walking into a place that has barely any means to defend itself and unleashing carnage is a horrific concept.

Many times over many years, politicians and citizens have sought to even the odds by arming trained faculty of schools in the event of a shooter, but have been met with very little success around the country.

So at our range day, we expected to show just how defenseless students are, by firing shots at the closest thing most schoolchildren have as protection. Their textbooks and their backpack. What we thought would happen, would be a bullet cutting through like there was nothing there, but as you can see in the video below, the results were a bit more than even we were expecting.

As you can see in the video, we fired a .380 pistol at the backpack and six textbooks within, but we were not even able to penetrate through the second book with that kind of firepower. But that wasn't the only kind of firepower that we had with at the range, that day.

Next we tried a shot with an AR-15 and even this powerful rifle, with rounds traveling at over 3000 ft per second could not penetrate through the third book. It was at that point that we knew that there was something to this and like our own at the range Mythbusters, the final test went for overkill. As we shot 5 rounds in quick succession, aiming for the same place and found that not one bullet penetrated past the fifth book and none of them had gotten through.

So interestingly enough, there is a level of protection for your students at their school. Shielding yourself with a backpack full of textbooks can be mighty effective in a last resort scenario.

Is there anything else you would like us to test and see its bulletproof capabilities? Let us know in the comments below. But be sure to take a look at our “What is and isn't bulletproof” article.

15 Responses to Will Textbooks in a Backpack Stop Bullets?