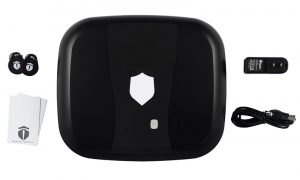 During my more than 40 years on this planet, I have seen new technology creep into nearly every aspect of my life. Today it seems like everything we use or come into contact with is ‘smart,' not that this is necessarily a bad thing.

Up until a little over a decade ago, most gun safes available for the average gun owner remained unchanged, requiring either a dial combination or key to open. Then, at some point relatively recently, safes started to get some technological advancements.

Some of them have an electronic keypad and are opened by a numeric code, while others are even more advanced than that.

The early fingerprint controlled gun safes were expensive and the technology was not reliable enough for someone to bet their life on it working when they needed it to.

Recently, the reliability of Radio-Frequency Identification (RFID) and biometric technology has advanced drastically. Additionally, the manufacturing costs have come down which has opened the door for companies to manufacture safes that incorporate this technology into their design without costing a fortune.

I use several different types of gun safes in my home. I have a keyed safe and a digital combination safe. But I wanted to tell you about my experience with a true smart safe. 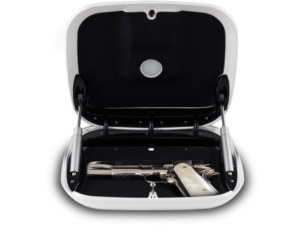 I received the safe for testing and evaluation from a company appropriately named The Gun Box. The company produces beautifully designed gun safes crammed with technology.

They are available in a variety of classy colors and are as pretty as they are functional. My testing was solely on The Gun Box's top of the line safe, The Gun Box 2.0 model. The company produces 2 different models of handgun safes at different price points, depending on how many bells and whistles you want on yours.

You can see from the photos and the nicely produced videos on the company web page that these are not something you want to hide away in the closet. This is something that would actually look nice on your nightstand. After I got over being awed by the safe's curves and appearance, I wanted to really look at the technology incorporated inside and how practical and reliable it was.

The Gun Box 2.0 is really the most advanced safe I have found on the market (as of 2016 when this article was first published). It incorporates the latest technologies into its function. You can get the 2.0 with radio-frequency identification (RFID) and biometric (fingerprint) access, or RFID only. The model I tested utilized both technologies.

The safe has a super reliable and adjustable fingerprint scanner that can be programmed to remember up to 100 fingerprints! Not that I have 100 people accessing my safe, but I program my index and middle fingers at many different angles on the pad in order to maximize the chance of the reader recognizing my fingerprint.

The safe can also be opened by RFID. The safe comes with two RFID key cards and two RFID key fobs. The cards and fobs work the same and need to be held about 2-4 inches over the safe to unlock it. If you like this technology, you can also purchase RFID bracelets, rings, or stickers that you could use to make a custom ‘key' for your safe. If this wasn't enough, The Gun Box 2.0 also incorporates Bluetooth

technology into its design.

By downloading a free smart phone application on your Android or iPhone, you can control many aspects of your safe including unlocking it. The Bluetooth works like any other Bluetooth device and your phone needs to be around 10 feet from the safe to work.

No, there is no key override access, for this safe. In the unlikely event that all the electronics decided to quit at once, there is a mechanical way to retrieve your gun using an allen type wrench.

The safe has hydraulic shocks that quickly and fully open the lid upon it being unlocked. Additionally these shocks keep the safe's lid open so you don't have to worry about the door swinging closed on your hand. Once it's open, there is an LED light that illuminates the safe's contents.

The amount of time the light stays on can be adjusted through the smart phone app. The interior of the safe is lined with a soft, rubbery material that will keep your firearm's finish from being damaged.

The safe has a rechargeable battery. You can use the smart phone app to check battery life, but you don't have to rely solely on battery power. You can plug the safe directly into an outlet and power it that way as well.

The safe also has 2 USB ports on the back of it. This gives you the ability to charge your cell phone or tablet. Finally, the safe has a built in alarm that will sound if the safe is moved. And if you are wondering, the safe does have mounting holes and a place for a steel cable tether so there are different options for you.

Additionally, the safe is portable enough, and TSA approved to be used to transport your firearm in your car or on an airplane.

It's hard not to be wowed by all that it offers. In addition to its appearance, the safe does what you want it to do and even more. I mean, not many of us would even think to charge our cell phone with our gun safe, but since it looks nice enough to leave on the night stand, and is plugged into the wall, why not? 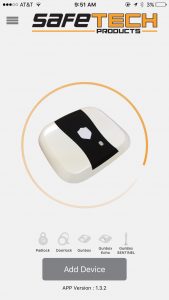 I know a large number of folks are still leery about trusting electronics in a life or death situation. I think it is time to start embracing the technology more because it is not as buggy and prone to problems like it was even a few short years ago.

The fact that the safe can be plugged in is a huge positive for those who don't like to rely on batteries. The lack of a key override can be an issue for some, but I don't see it as an issue because with the safe being plugged in and a battery backup there should always be power to your safe.

Also, the technology seems to be as reliable as the digital numeric keypad that opens my other safe. Is the RFID and biometric technology on The Gun Safe reliable? I tested the safe a lot and did not have any issues whatsoever.

In fact, I have used other biometric fingerprint safes and found this one worked better than many of the others I have tested. It was the unreliability of those fingerprint scanners that had me shy away from purchasing one a few years back.

The RFID sticker idea is neat, because you could create a ‘key' out of nearly anything. A nick-nack that sits on your dresser could be turned into a covert key to open your safe simply by sticking an RFID sticker on the bottom.

I love the interior light for obvious reasons as well as the fact that that The Gun Box comes with a motion alarm. I have a small child, and I think it is a terrific addition to keep kids honest. If they so much as tilt the box, everyone will know. As far as the app, I think it provides nice features. While I wouldn't normally use my phone to open my gun safe, it is pretty cool to be able to and if for some reason you can't find any of your RFID keys, it's an option.

Though as a disclaimer, there are a lot of people who can't get the app to work for one reason or another. Extra benefits of utilizing the smart phone app are as follows:

I found the safe was large enough for any of of my handguns. It is not huge but definitely is big enough for a firearm and a spare magazine.

The top of the line 2.0 comes with a top of the line price tag, so you are probably asking: Is it worth it? If you like technology and having the best, this safe should be in your home. Because it looks so darn sweet, it can be placed anywhere in the house without being an eyesore. This gives you a gun in areas where normally you may not want an ugly safe.

The technology is solid and I tested it out and it read my fingerprints just fine. Like I mentioned, I did program my middle and index fingers at various angles to maximize recognition.

All in all, the RFID and biometric technology worked. As far as longevity, The Gun Box company has been producing these safes for several years and I have not been able to find many complaints at all about the product. The materials and craftsmanship seem to be of a good quality and I don't see why it wouldn't last as long as any other safe.

My opinion is that the safe is reliable and functional. If you can save up a few extra bucks and go for the top of the line in gun safes, you won't be disappointed.