If you have been in the industry for awhile you may have been subjected to the debate surrounding “keeping the firearm on the nightstand” for quick access in a middle of the night home invasion or other related threat. There are gun owners that are on both sides of this debate and I thought it was time we take a scientific and thorough approach at answering the question.

What good does a Personal Defense Weapon (gun) do you locked up in a safe? If you are realistic in your evaluation of the likelihood of a home invasion you should have the weapon to hand at all times.

And here is another example of a comment from PJ with the opposite perspective:

Consider this, what good will a gun be if a criminal manages to get to it first..? You may end up being shot with the very same firearm that is supposed to give you a sense of safety.

As an instructor I've spent the last decade telling students to lock up the gun at all times unless it is on your person. I've never seen any real credence to the idea of keeping the gun on the nightstand (outside of a safe) and so I've decided to embark on some discovery.

What is the Common Practice?

I started my inquiry by polling our audience. We asked the hundred thousand plus people on our email newsletter to answer a few questions. We published the full results here (Nightstand Survey Results) but I was surprised both by the high percentage of gun owners (including parents with kids in the home) who report they do not keep the gun in a safe at night.

So it led me to wonder why so many gun owners choose NOT to keep their gun in a gun safe. There are 2 obvious potential reasons.

So I decided to put that to the test…

The Issue Of Speed and Time 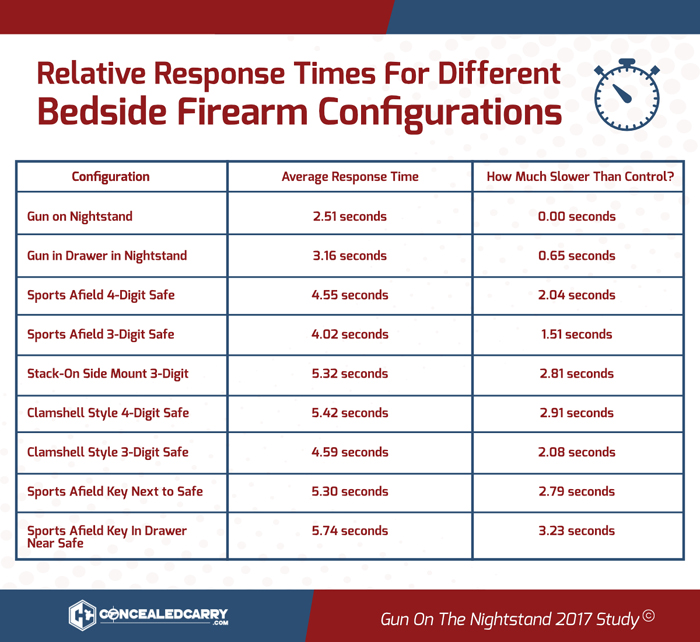 UPDATE (May 2021) The Sports Afield safe used when I conducted this research has been discontinued. The new “home defense quick access vaults” being sold by Sports Afield today do not have tactile buttons but instead a flat virtual keypad similar to your phone. For that reason, I no longer use or endorse those safes. If you are looking for something comparable and even better that is similar I suggest the GunVault MiniVault.

How Big of A Deal is Safety?

Our survey data did show that gun owners with younger children are more likely to keep a gun in the safe but in those situations, it is still the majority of the survey respondents who choose to NOT lock up the gun. There are a lot of variables that get weighed into the decision including:

According to the National Shooting Sports Foundation (NSSF) the number of children fatalities related to firearms is down over the last decade but it was still 600 deaths in the last reported year. They credit this to the Project Child Safe efforts which involve the securing of firearms in the home. Anecdotally I can also tell you that having read all 292 news stories from this Negligent Discharge Study, I have a strong sense for the potential loss and risk that can come quickly when children access an unauthorized firearm.

Each parent or grandparent has to make their own decisions but I suspect that for most of us the odds of the firearm being accessed by an authorized child are higher than the odds of experiencing a home invasion in which 1.51 to 3.23 seconds will make all the difference.

What About The Bad Guy/Gal Accessing the Gun? 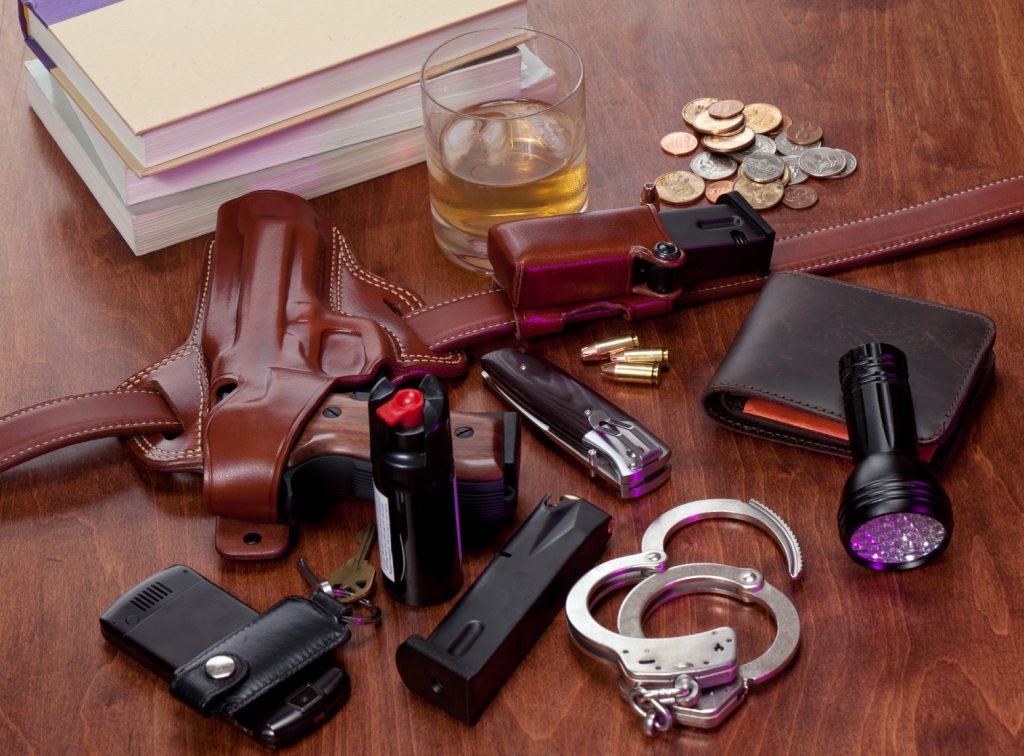 The other most common argument made in favor of locking the guns in the safe is the harsh reality that criminals may access that firearm. Certainly, this is more likely if the firearm is left unattended than during the middle of the night when you are laying asleep right next to the gun but both scenarios are conceivable.

The more realistic and practical point might be in relation to the odds of you leaving the gun uncontrolled during the day. One of my students explained to me that at night before he goes to bed he removes his firearm from his holster and places it on his nightstand. In the morning when he wakes up he puts the firearm back in his holster and on his body. Thus the firearm is only ever “uncontrolled” when it sits right next to him during the night.

That sounds like a fairly sensible approach but when I asked him has there ever been a day… ever… when he woke up in the morning and his routine was thrown off… and he didn't immediately strap on the gun? Perhaps on a weekend or holiday? How likely is it that the gun may continue to sit on that nightstand uncontrolled or monitored? If that idea concerns you… you might want a safe.

What About Preventing Negligence By Forcing Cognition

One issue I think we fail to consider is the possibility that one might negligently discharge their firearm when they are not yet fully awake. In a groggy moment or a moment when one is not fully awake, reaching for the gun and using it when it shouldn't be used is a valid possibility and one we have seen documented on various occasions.

I have young children in my home. I will continue to place my guns in a safe when they are not on my body. I am willing to slow my response time by about 2 seconds in order to have that greater sense of security and peace of mind. Having heard from you in the survey and having run the tests on my own, I still feel that MOST gun owners would probably do well to utilize a bedside safe but hopefully this data has given you additional information to be able to make a more informed decision.

What did I miss? What did I fail to consider? Let me know in the comments below.

Where Do Gun Owners Keep Their Guns At Night? [INFOGRAPHIC]
US Law Shield Expands Coverage To Include Negligent Discharges

323 Responses to Keeping A Gun On The Nightstand