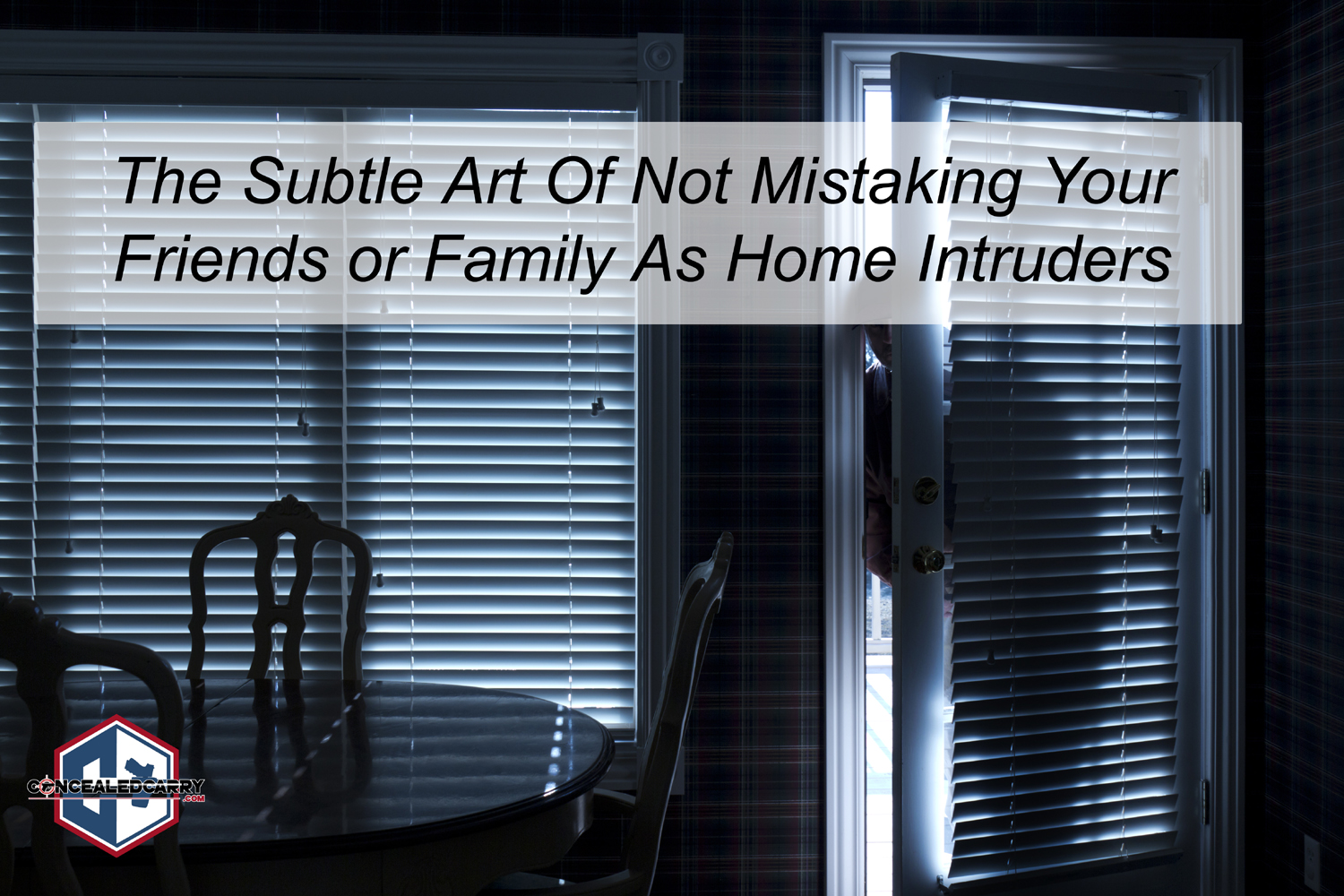 If you have been through any gun safety course ever you have probably heard a variation of an industry-standard safety rule along the lines of “Know Your Target and Beyond.” This safety rule makes sense and we all inherently understand that we shouldn't fire our guns at things we can't identify but when we feel our lives may be in danger we act instinctively.

Why This Is a Challenge

Over the last several years I've told my students they have to avoid shooting at the 3 S's. We should never shoot at shapes, shadows, or sounds. All three may seem spooky or really cause us alarm or panic but none of them are identified threats. As I stated in the last paragraph, however; at the moment this can be easier said than done. So the objective must be to minimize our odds of being in the situation where we feel compromised relative to the safety rule.

Your odds of your home being involved in a home invasion are 1 in 34 each year. Americans are justified in being afraid of violent intruders after all 26% of home robberies become violent crimes (266,560 per year). That is roughly 1 every 2 minutes.

When the heart is pumping and we think we face an imminent threat we leap to conclusions or we find ourselves in situations where we don't have the time to properly identify our threat before we feel we must engage.

Further, an analysis of the 35+ news stories below, suggest that sometimes our own family members do things that we don't expect. They come home when we think they are traveling or at school. They sneak through a window because they forgot their key or they don't want to be seen. They bang on the door or try to force their way in because they are angry or confused.

My point with all of this? I get it. Sometimes bad things happen and we are all subject to making mistakes. HOWEVER, in almost, if not every incident I've reviewed (see below list) the incident could have been prevented if a small number of simple tactics had been followed. My intent is to review those tactics in the hope that the rest of us can prevent such a tragedy from turning our lives upside down.

Do Not Go Looking For the Intruder

I use the phrase “Isolate The Family And Defend the Room” (IFDR) when I describe to my students the best core home defense strategy. Sadly it is overly simplistic and doesn't perfectly address every potential situation.

All the same, several of the situations I've studied would have been avoided if the gun owner had chosen to not go in search of the sound they heard. That might sound ludicrous. After all when you are relaxed in your home and suddenly hear an unexpected noise in the garage or the basement the most natural thing is to go investigate. After all the odds of there being a real intruder are low, right?

That may be but going toward the sound or shadow puts you in a situation where you may feel that you do not have a safe means of retreat or really any option other than shooting toward the dark shape. In our Complete Home Defense training program, we spend over an hour talking about fortifying safe rooms, defending safe rooms, and what to have in a safe room. If you really think there is someone in your home who doesn't belong there, shelter in a safe room and call the police.

Lock All Your Doors and Windows

If a family member catches you off guard because they came through an unlocked door or window, that would have been easily preventable. When you are home, lock your doors and windows. If a friend or the in-laws decide to pay you a visit they will need to knock or ring the doorbell.

Take a Position of Cover

There are several incidents below in which someone felt compelled to shoot through a door as a potential attacker was coming through that door. Picture that in your mind. The gun owner has positioned themselves on the other side of the door such that the door is the ONLY thing between them and the potential attacker. 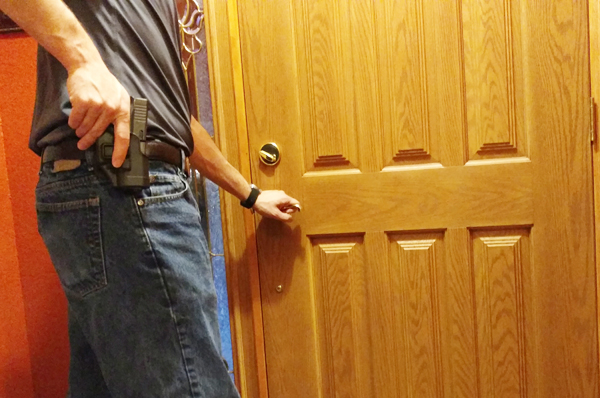 When the door is breached in any way the gun owner becomes vulnerable and feels they need to shoot to survive. This happens because of poor tactics. If you hear banging on the door turn on the interior lights, use verbal commands, AND PUT SOME COVER BETWEEN YOU AND THE DOOR.

Good tactics are doing things that maximize your odds of surviving an incident and your odds increase when you put more space and better cover and concealment between you and your potential attacker. Side benefit; if it turns out to be your drunk son or neighbor you will have a few moments to identify them as such before you feel that you are forced to start shooting.

Use Light To Your Advantage

It can be difficult to identify your threat in the dark, but in the light not as much so. Turn the lights on. You can flip the switch on the wall or you may have smart home features that allow you to turn on lights remotely via an app on your phone.

Seems a little extreme? Ok, then use a flashlight. There are arguments in favor of and situations in which both weapon-mounted and handheld lights can be used to one's advantage and understand that it is fully irresponsible and dangerous to fire at a target you have not yet been able to identify. So use a light. 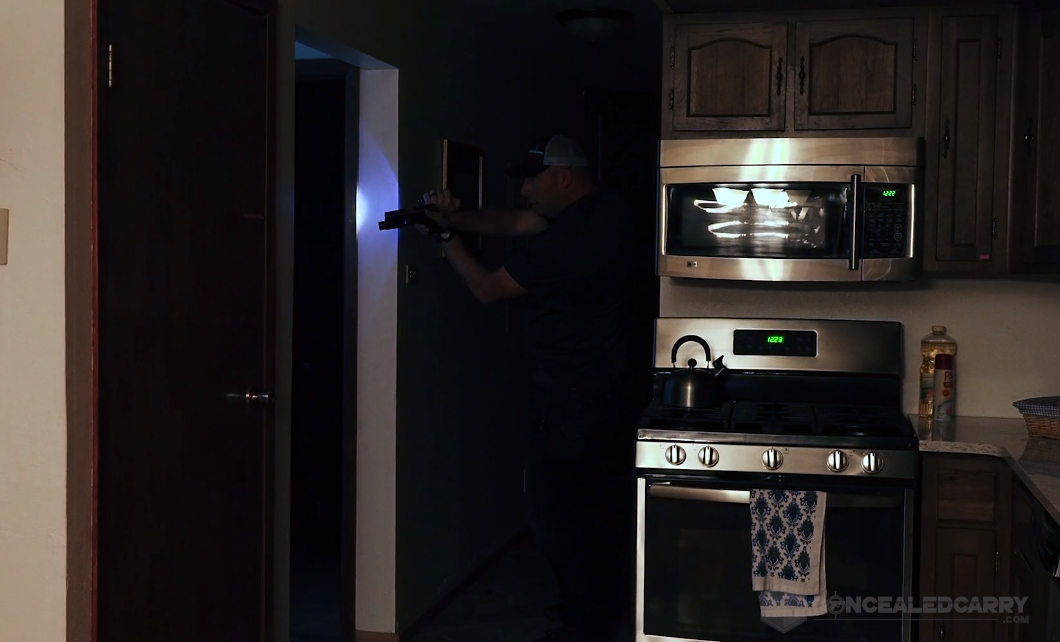 When I tell students to turn lights on in a life-threatening encounter I almost always hear the counter-argument “but then the bad guy will see me and know my position.” While that is true keep two things in mind:

Use Verbal Commands to Deescalate Situations And Identify Threats

Perhaps the most critical thing we can do to minimize the risk of shooting someone who poses no legitimate threat at all is to use verbal commands. It can be difficult to hear through a closed door but if your potential attacker can hear you and they pose a real threat, they are likely to retreat in order to avoid risk. If it happens to be your brother in law who magically decided to come stay with you every few years then they are likely to respond and let you know they don't want to get shot.

Consider and even practice using a few simple commands that are short and clear such as:

Identify yourself, I'm armed and prepared to defend my home

Police are on the way and I'm armed

Don't you think your brother in law, or your brother who is planning to jump out and play a prank on you, will rethink their plan when they hear you shout really loud that you are armed? It certainly can't hurt.

Manage Expectations with Other Occupants and Guests

Several incidents listed below involve roommates or visiting family who were frankly unaware that they were breaking the safety protocol expectations of the gun owner they were sharing a home with.

When you have more people in your home you need to update or establish your response plan and protocols. You may not be able to respond to a bump in the night the way you normally would knowing you have additional guests in the home.

In addition to your response plan needing adjustments, there may be some things you want to communicate to your guests. It may not make sense to brief them on their role in an emergency or run some drills upon their arrival, but you certainly can tell them that they shouldn't come and go after a certain hour of night or that should they need something after others are asleep they should turn on certain lights in the home or do whatever else is needed to help you identify if there is a potential threat in the home.

Children, spouses, and roommates need to know you are armed and that you will respond to strange sounds and shadows. They need to know why you keep all windows and doors locked.

Examples of Incidents We Are Trying to Avoid

I decided to compile some news coverage of incidents of people mistakenly shooting a friend or family members who they thought was an intruder or attacker. There are more than you might think and while in the grand scheme of things it is relatively few incidents given the number of Americans who have a firearm for self-defense; each of us should do whatever is necessary to ensure we do NOT end up on this list: