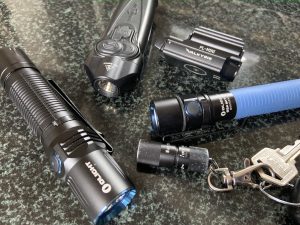 Weapon mounted lights (WML) and handheld lights are a necessity in low-light conditions. Without them, identification of the threat becomes difficult. Family members have shot other family members in low-light environments because they shot at someone they didn't identify.

You may have not realized it, but you learned the importance of light the first time you were told about firearms safety. Think about this basic rule: identify your target and what is beyond it. Now apply it to real-world defensive gun use. It would sound more like: identify your threat, what is around it, and be prepared for changes.

How does light factor into this rule? At night or in low light environments, we must illuminate our threat if we want to identify it as something that needs to be shot. Many instances where family members are shot are the result of the shooter's failure to identify the person they are shooting. The main reason why is usually because it was too dark to properly identify them. This is why light is important for your real-world gun use.

I identify four basic ways our target/threat is illuminated. They all have inherent benefits and limitations.

Because I don't want to make this post eight thousand words, I am going to keep it basic and narrowly focused on describing the four common handheld light hold techniques. 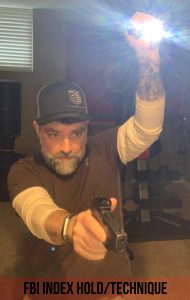 The FBI index technique is popular, partially because it is simple.

The light is positioned in the hand just like in the FBI technique. This time, the support hand is placed under the dominant hand/gun. The wrists of the hands are interlocked creating a bit more stability than a true one-handed technique. This technique is better for shooting, not as great for searching. 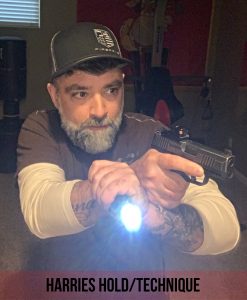 The Harries technique has been taught for years and is quite popular. It allows for a quasi two-handed grip.

The light is held in the hand just like the FBI and Harries Holds. Just as the name implies, instead of holding the light away from the body, the light is held tight and against the neck/jaw. This technique is good for searching and is more instinctive during shooting. 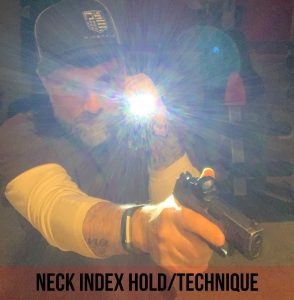 The neck index technique is used because it is an intuitive position to fight from. The light can move independently of the muzzle, making it great for searching.

The light is positioned in the support hand, with the back/tail cap end toward the thumb, and the lens end extended between the index and middle fingers. The support hand attempts to grip the gun as it would normally. This technique provides the best grip for shooting but is not ideal for searching. 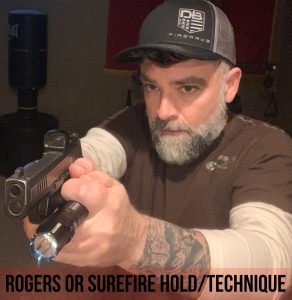 The Rogers or Surefire technique provides the best grip on the gun.

Whichever method you choose it helps to understand the limitations and strengths of each technique. The FBI or Neck index is best if you have a WML, as they allow for illuminating things without having to point a gun at them. If you don't have an accessory rail on your handgun or a light bearing holster, the Harries and Rogers/Surefire grip can be a solid choice with focused practice.

You can practice your flashlight technique when you incorporate low-light drills into your dryfire practice. I also highly suggest taking a course on low-light handgun techniques. Unfortunately, there are few outdoor ranges that allow shooting after dark, so finding an in-person class is difficult.

If you can take an in-person low-light pistol class from a trusted instructor I highly suggest it. They are fun and educational. In the meantime, you should check out the low-light instruction that is part of our Complete Home Defense Course.