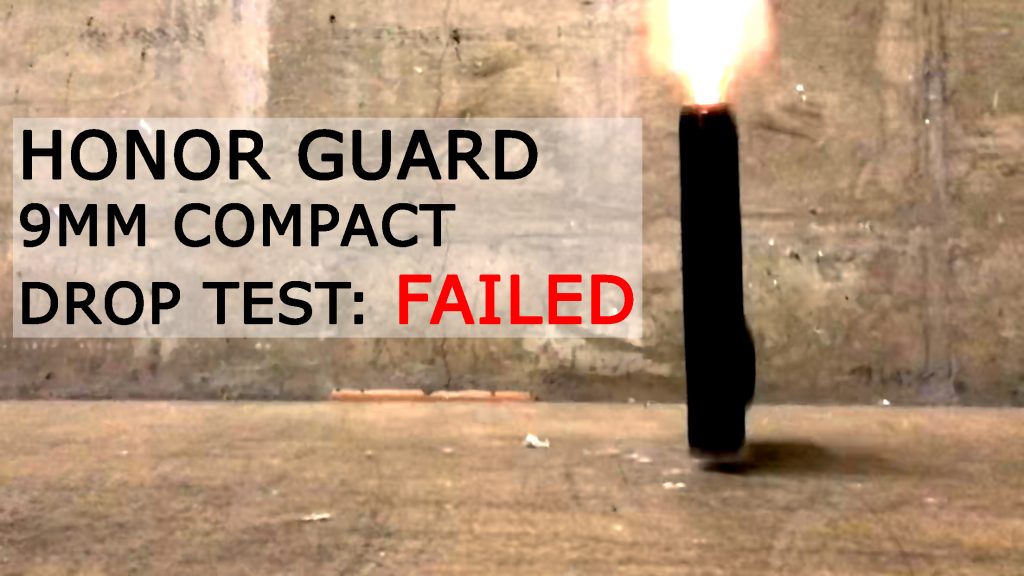 UPDATE: Below is an article we published when we confirmed findings about the Honor Guard discharging when dropped. In a relatively short period of time after this finding, Honor Defense began offering a voluntary upgrade that made the Honor Guard even safer and no longer vulnerable to a potential discharge when impacted on the rear. You can learn more about the upgrade here: Honor Defense Announces Free Voluntary Upgrades to Any Honor Guard Pistol Owner

Over the past few days there's been a lot of talk about the drop safety of Honor Defense's Honor Guard 9mm pistol. It has become quite the popular little gem for a gun manufactured by a company that's been around for barely 2 years.

We've been impressed with Honor Defense since the get-go because of their great pride in making quality guns in America by American craftsmen, and not just ANY craftsmen–these are U.S. Military veterans. It is a company that exudes patriotism.

Enter into the crowded single-stack 9mm compact market the Honor Guard pistol. It is a sort of cross between a S&W M&P Shield in its shape and looks and the SIG P320 in its engineering and design. It is a striker-fired, semi-auto with completely ambidextrous controls and a trigger that is sans-trigger safety. And therein lies one of its potential problems with being a drop-safe pistol. It would seem that the trigger and some of the other internals have enough mass to them that when dropped on the rear of the slide at a negative 30-degree angle (similar to the P320 with its own drop safety issues) it is capable of tripping the trigger and causing the gun to be fired.

The news was broken by Patrick Roberts, formerly of The Firearm Blog, currently striking out on his own with TheFirearmRack.com. He was prompted to take out all his guns from his safe and start striking them on the rear of the slide with a mallet to determine if there were any other firearms that might suffer from the same drop safety issue as the P320. It was discovered that the Honor Guard, with some similarly designed internal components, was also susceptible. This was demonstrated with both a drop on the ground and with the mallet strikes.

After contacting Honor Defense to inform them of his discovery, Patrick states that The Firearm Blog suppressed the story, threatening to fire him if he did anything to publish it. He has since left TFB and started The Firearm Rack and thus was able to get the story out. Since then others have corroborated the results with tests coming in from Sootch00 and Jeremy over at TheTruthAboutGuns.com.

We decided we wanted to perform our own independent test to see what sort of results we could come up with. [Video Down Below]

First we needed to acquire an Honor Guard pistol since we didn't already have one on hand. We were able to find one in stock with a local dealer, and ConcealedCarry.com President, Jacob Paulsen, was able to make the purchase. We wanted to purchase it ourselves from a random dealer so as not to have any reason to suspect the gun was altered or modified in any way.

Next we put it through a fairly rapid 200-round test to check function and reliability. We found the gun to be quite reliable. However, it did have a couple of issues. First of all, it struggled to positively extract fired casings when the magazine was removed from gun. This is not entirely alarming as there are a number of other guns that also struggle with this same issue including many Glocks. Secondly, it did have one failure-to-feed malfunction which ironically occurred on exactly the 200th round–our last round as part of the initial function check and testing.

Then we moved right into the drop test. We procured some empty, primed shell casings. We proceeded to drop it. I don't know what I was expecting, but I guess after the videos I had seen I expected it to fire when dropped. It did not. Ultimately it took 22 drops before it finally did fire. And this was when dropping from about 7 or 8 feet high as opposed to the 4 or 5 feet high we started with. After we got that result, we tried to duplicate it but were unsuccessful.

We then tried striking the rear of the slide with a mallet. I started with fairly light taps and progressively got stronger. It took 4 strikes before it fired. I then tried a second time once again progressively striking harder each time. This time it fired after 3 hits. By this point I was convinced that if I simply whacked it good and firm on the first strike it would fire with no trouble. This proved true. I gave it one good solid smack and BANG! I think you could do this reliably all day long until you either tired of it or you broke the handgun.

Ultimately that is what we ended up doing. We were going to keep dropping it, but eventually a good-sized piece of the back cover plate of the slide broke off. Also at that point I noticed the rear left portion of the rail of the slide was cracked and bent inward. The gun still seemed it would function, but it is now impossible to disassemble the gun without first somehow bending back or breaking off the cracked portion of the rail.

After the mallet strikes, we did fire a few rounds through the gun to make sure it was still functioning as it should. It had no problems firing whatsoever.

So what did we discover?

It would seem that the metal trigger has enough mass for it to move rearward during a drop on the rear of the gun. Also the sear of the Honor Guard is quite large and heavy compared to other similarly manufactured compact pistols. As the sear is connected to the trigger via the trigger bar, this likely facilitates even easier unintended movement of the trigger when dropped or struck.

We found that with our Long Slide Compact version of the Honor Guard line, which is what we purchased, was more prone to malfunction when the striking force was more in line with the barrel as opposed to the negative 30-degree angle made famous with the SIG P320 debacle. All drops at that angle did not cause the gun to fire.

From looking at some of the other bloggers and Youtubers that have drop tested the Honor Guard 9mm, it seems that the Subcompact model is much more likely to fail the test than the Long Slide version. Our test would seem to agree with that as far as the actual drop test is concerned. We did have to drop it nearly two dozen times before it finally discharged.

Is even one unintended discharge from the Honor Guard 9mm from dropping or striking it too much? Perhaps, but at the very least it makes it difficult to have confidence in your weapon and the feeling is uncomfortable. I can't tell you what to do, but you should be able to make your own decision on the matter based on these simple tests.

Also is it possible there are other guns out there that are also not “drop-safe?” It's possible, and if given the opportunity we will endeavor to test more of them. But this whole situation with the P320 and Honor Guard handguns does bring this to the front of our minds, and that is a good thing. Hopefully if there are other guns out there with safety deficiencies, we can discover them.

Where do we go from here?

After completing our own test on Friday, I called and spoke with Gary Ramey, the President of Honor Defense and shared with him our findings. What was apparent to me is that they are taking this all very seriously and are actively looking into it and working to find a solution as quickly as possible. I invited Gary to come onto the Concealed Carry Podcast sometime next week to discuss and share with us what he has discovered.

Here is a briefly edited video showing some of the testing we performed. A longer, more-detailed video is in the works, so stay tuned for it: