Join Our Newsletter
Shop Our Store
MAIN MENUMAIN MENU
By Joshua Gillem on March 8, 2019 in Opinion 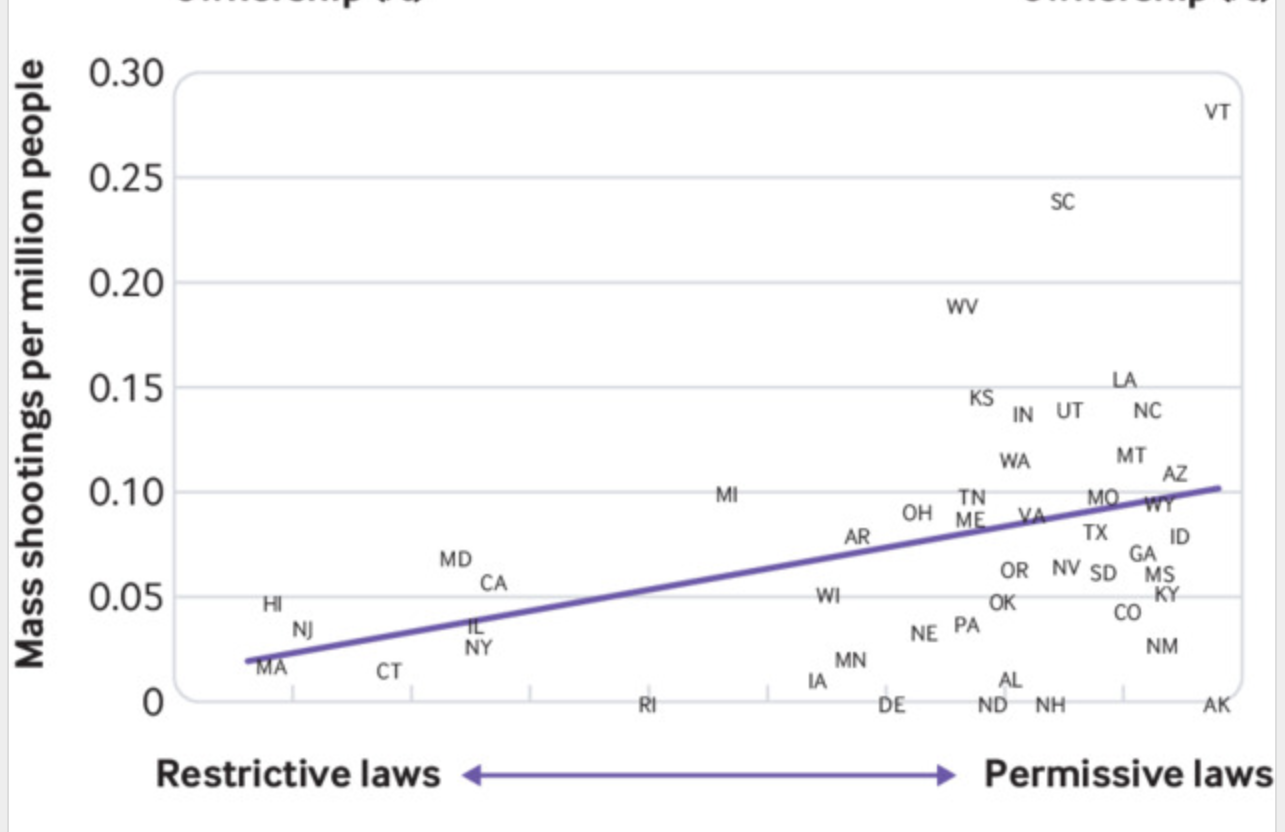 A new study claims to show the correlation between mass shootings and how easy it is to buy a gun in that state. This study, oddly enough, is based on a book we sell in our store called the Traveler's Guide to the Firearm Laws of the Fifty States.

That's a great book if you travel, and highly recommended. Do yourself a favor and buy one.

The anti-gun media, of course, has picked this up and ran with it, cherry picking the stats the study shows while avoiding one small bit of information found at the bottom of this biased study:

There are several limitations to our study. Our study design incorporated a time series component, lagged variables, and multiple covariate adjustment strategies, and was primarily able to show broad associations between state gun laws, gun ownership, and mass shootings.

I'd go one step further to point out that much information is left out.

I'm not here to debate the truth of the study, nor do I care about trying to prove the study wrong. They admitted in the study that there were limitations and that's good enough for me. There are some things I wanted to talk about, however, that should be addressed.

For example, while it's never my goal to limit the importance of the lives lost in a mass shooting, there are other numbers that should be used. One of these sets of numbers are the violent crime rates in the states listed on each end of the spectrum.

After all, violent crime is, in my opinion, much more telling than mass shootings are.

Mass shootings, by comparison are rarer than your average shooting or display of a weapon in attempted robbery or other crime.

Here is a screenshot I took of a page showing violent crime rates in the top 20 states — https://www.statista.com/statistics/200445/reported-violent-crime-rate-in-the-us-states/: 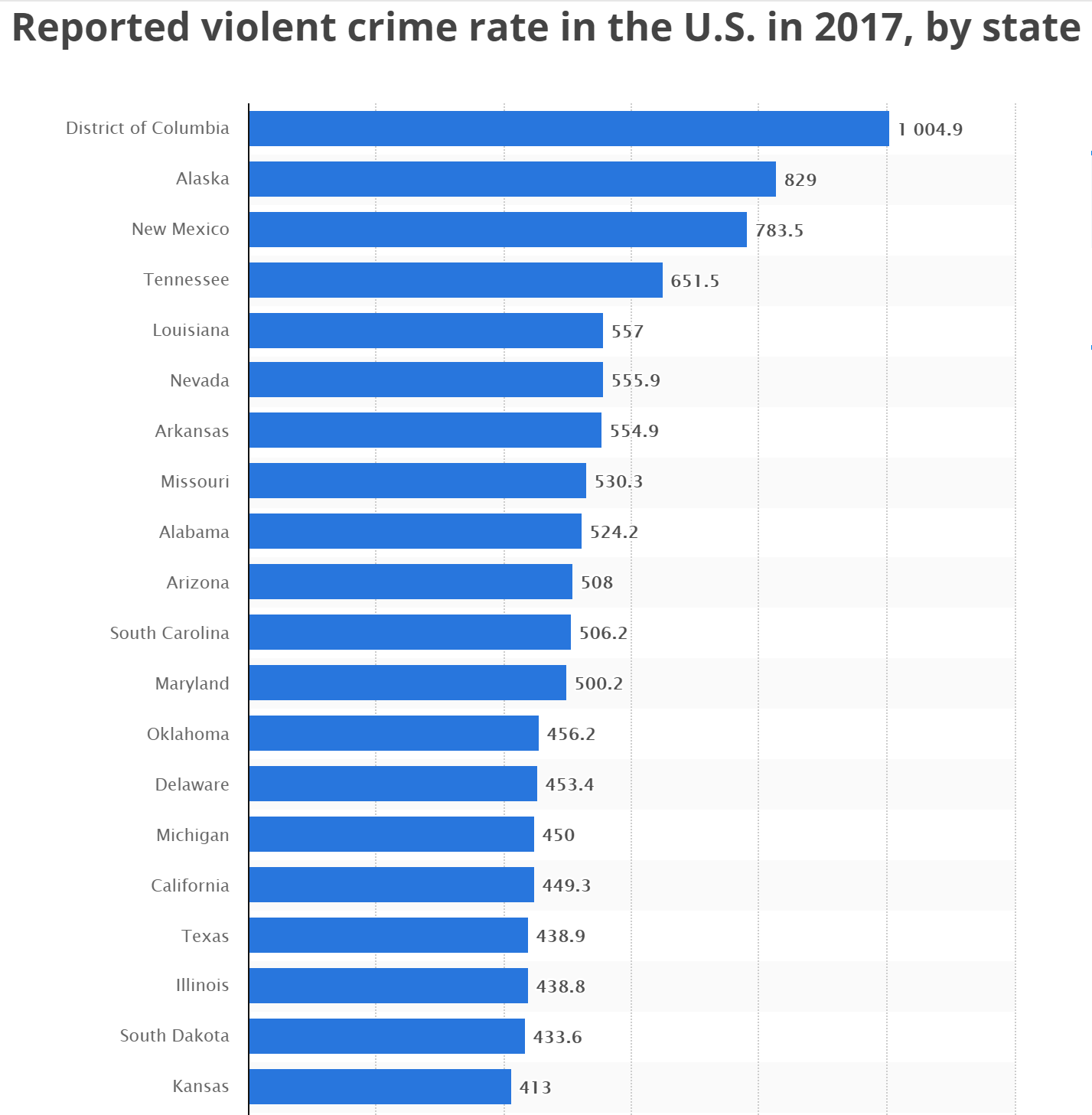 I pulled the top 20 in my screenshot just because it was all my screen would allow, since I'm on my small Microsoft Surface writing this article from a school function with my kids. But if you look closely, there are some states on this “most violent states” chart that shouldn't, in anti-gunner theory, be here.

So, what's the point? Well, there are a couple. First, it's really hard to show proof that mass shootings or other violence are more likely to happen in gun-friendly states with inaccurate data.

I can only imagine that those states aren't ranked higher in the flawed study because of extreme bias.

Violence is very well documented, and when studied properly shows a lot.

In the chart above, there are definitely some states on there that shouldn't be if gun control worked. Maryland, DC, California, Delaware, and Illinois would not be listed if the study was true.

In fact, I read one report that said you had a 1 in 13 chance of becoming the victim of a crime in one subsection of Baltimore, MD. This is in despite of the fact that Maryland is one of the strictest states in the Union for gun laws and is listed pretty low on this table from the flawed study:

Another report I just read showed the 30 most murderous cities throughout the country. Gun control role model, NJ, was listed twice in the top 15. California was also listed a couple of times throughout the entire list, as was (not as strict but still pretty bad) Chicago, IL.

As a side note, Chicago is getting better for the second year in a row. That report showed it ranked at 24.

The thing is, all of the states where those cities I just mentioned reside, have gun control measures in place.

In fact, Maryland and California are the poster children for gun control advocates. Why are Compton, CA and Baltimore, MD being ignored? Why doesn't Newark or Orange, NJ make their lists?

Perhaps because it goes against their agenda?

I'm also not blind, as there were also cities in pro-gun states listed on all the reports I read. The difference between my conclusions, is that I'm willing to see that there are murders in these pro-gun states.

I'm willing to admit that they're there and that something needs to be done about it.

But, saying that I should give up my guns in NC because a place called Salisbury, NC was listed at number 9 is asinine.

The point? Murder happens everywhere. Bad people are all over the place. And, you can't really show a correlation between people dying and how lax the gun laws are. Because, if that was the case, NJ, CA, and MD wouldn't have cities listed in the most violent.

Let me know if you agree in the comments below.