Join Our Newsletter
Shop Our Store
MAIN MENUMAIN MENU
By Matthew Maruster on June 10, 2022 in Opinion

Last week, the FBI released a summary of the data they collected on all the “active shootings” in 2021. We shouldn't make large conclusions based on one year's worth of data. However, we still should look at the data closely, because there is a lot we can learn.

Of those 61 incidents, here's the data:

Upward Trand in Number of Incidents —

Characteristics of the Killers —

Besides being evil, the shooters have other commonalities.

Active killers' ages varied from as young as 16 to as old as 67 years old!

While the government tries to convince citizens that banning body armor makes them safer, only 2 active killers wore body armor during the incident. Here is a great article about the stupidity of this proposal.

Law enforcement apprehended the killer in almost half of the incidents (30/61).

In 29 of the incidents, the killer stopped when he died. Good guys/gals with guns killed 18 of the suspects. Of these 18 instances, police killed 14, and an armed citizen stopped the active killer 4 times, and 11 of them killed themselves.

One died in a traffic collision fleeing from police, and one killer is still on the run.

Again, I don't want to generalize all mass killers based on one year's worth of data. But we can use this data to take away some general principles in how we respond to the incidents.

First, we can't predict who will commit a mass shooting based on age or race or who they voted for. What the FBI didn't disclose is the racial demographics of the killers. If the information exists, I haven't found it anywhere. But anecdotally, from researching a handful of the incidents, the racial makeup is as diverse as our country. Similarly, a political ideology or bigotry did not always lead the murderer to do what they did. I mention this because there are many false claims that “most active shooters are white, male, conservative, religious” etc., and data doesn't back this up. 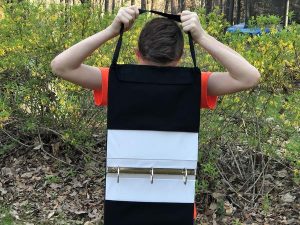 The argument should be about how effective this body armor is, not if parents should have the right to purchase it for their children.

Any law that bans a citizen from purchasing body armor ONLY makes law-abiding citizens more vulnerable. Two states, NEW York and Connecticut prohibit anyone from owning body armor. The justification is for “public safety.” But nearly every state, including NY and CT, already bans convicted felons from possessing body armor. That should give everyone pause and ask who exactly is the target of this law?

Two of the 61 active killers used body armor. So, while rare, it sometimes happens. When it comes to training, we should be train the appropriate skills to address a threat who is wearing body armor, but also understand the statistical probability of that happening.

Active shooters aren't concerned with what happens to them-

Active shooters go into the incident, assuming they won't make it out alive. They are cowards and either aren't concerned with any punishment resulting from their actions, or think that if they die, there won't be judgement. We may not see it here on Earth, but no evil doer goes unpunished (Prov 11:21).

Half of them are apprehended by police, good guys and gals with guns killed the other half. And let's not overlook that there would be no way to apprehend the suspect if law enforcement didn't have guns. Four times, a citizen with a gun stopped the mass shooter. This is statistically relevant because it means that armed citizens stop 6.5% of mass shootings. No wonder there is a big push by the anti-gun crowd to gaslight the public into thinking citizens shouldn't own guns. It completely refutes their argument.

Back in 2018, we published an article in which we found that when armed citizens intervene in mass shootings; they were successful 94% of the time. All this is to say that a responsibly armed citizenry is not the problem. 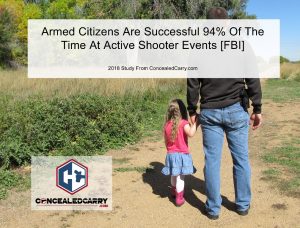 The world continues to be an evil and violent place. Our goal should be, where possible, to live peaceably with others. Banning guns, “high-capacity” magazines, body armor, won't change the heart that is desperately wicked. Rasing the age of gun ownership to 21 won't stop mass shootings. It leaves a 19-year-old unable to protect his family from evildoers. Historically, governments that disarmed their citizenry were already authoritative, or without opposition, became so. Billions of people die at the hands of their own corrupt government. Far more than at the hand of any gun-owning, law-abiding, NRA member.

The drafters of our Constitution did not include the Second Amendment because they really enjoyed hunting. They knew what a tyrannical government looked like. They saw what that government did to ensure it could do whatever it wanted to do without opposition, disarm the citizenry.

What gives you a better chance of survival during an active shooting event, hiding and helpless, or armed and prepared?

Yes, rights come with responsibility, no doubt. People in positions of authority also have a responsibility. They must do the RIGHT thing, not just SOMEthing.

In discussions like this, I'm often asked, “well then, what do you propose should be done?” Below is the most succinct way I can put how I feel about mass shootings like the recent school shooting in Texas. If you don't want my opinion, feel free to stop reading. If not, here it is:

My heart genuinely aches when I hear about people dying because of evil men. Losing a child or other loved one to murder is a tragedy that I can't comprehend. However, lost in the argument over gun control is this: Our society has turned from honoring God and following His principles and example. God tells us not to fear man that can kill the body but not our soul, but to fear the one that will destroy both body and soul in hell. We are all appointed to die, but the story isn't finished. Our soul is eternal. Again, yes, it is horribly devastating that innocent people die. I can't emphasize this point enough. However, we compound the tragedy by not giving them the good news that God loved us and sent Jesus, His Son, Jesus to die for our sins that we could be reconciled before a holy God who hates sin. That Jesus overcame death and rose again to fulfill the scriptures. Choosing God's gift of eternal salvation glorifies Him and equips us to be the vessels of God's love and character to a world that is corrupted and evil (Romans 1:16-17). We feel sorrowful not just because a person died here on Earth, but that they die in separation from God forever. We should care for both the body and the soul of our fellow men, but never forget the destination of the eternal soul.

Interstate Travel: Understanding Article 926A of FOPA
Numbers of Shootings in the USA—Why Does Everyone Reference Different Numbers