Join Our Newsletter
Shop Our Store
MAIN MENUMAIN MENU
By Joshua Gillem on April 14, 2020 in Opinion 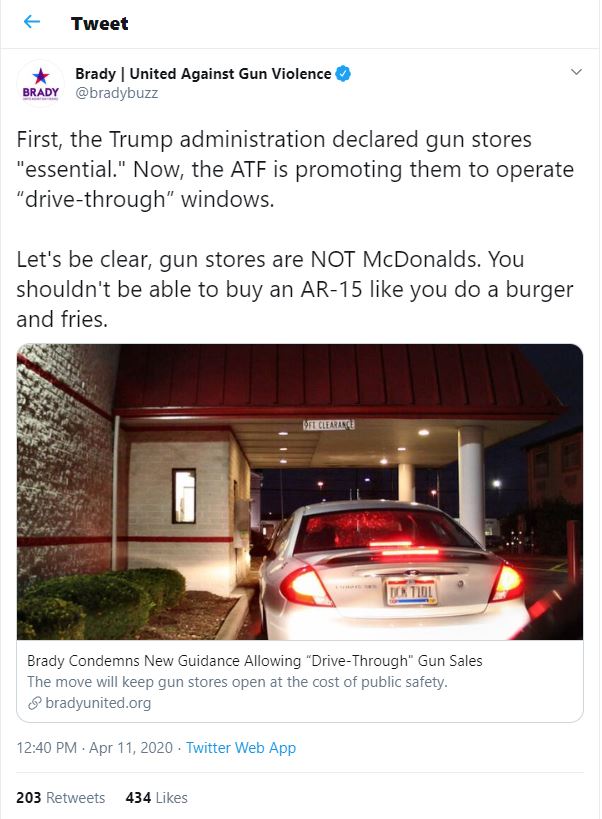 You CANNOT buy an AR-15 like you can a burger and fries regardless of what the clueless tweet implies, even though the right to keep and bear arms is exactly that, a right. And there's nothing in the Constitution about fast food restaurants, at least, not last I checked.

The anti-gun media are willing and very able to turn a pebble into a mountain with just about anything they feel deserves the attention. This time around, people are losing their minds over drive thru gun shops and those conducting business outside.

This follows close on the heels of something else they utterly lost their minds over, which was that gun shops were deemed essential businesses during the COVID-19 crisis. Which, by the way, they're still mentioning as seen in the above tweet and are still clearly upset about.

So yeah, drive-thru gun shops (as well as parking lot gun shops) are now currently a thing. Let me be absolutely clear on something right now, this isn't like a traditional drive thru where you pull up to the speaker thing, order a Big Mac with fries, and then pull up to the window to get your stuff.

You still have to go through a background check and fill out the necessary paperwork. There is no way around it.

You might not have to go through a background check for a Big Mac, but you'd still need to have one for the gun you're planning to buy.

All the rules and background stuff needs to still be taking place and I can assure you that the local gun shops are NOT willing to lose their ability to do business after Corona Time is over. They are still therefore following rules to the letter.

Organizations like Brady and anti-gun media are doing nothing more than trying to provoke fear and salvage whatever nostalgia from the old days they can. What do I mean? Well, until recently they fooled the masses to believe that it was easier to get a gun than a library book.

Tons of new gun owners just found out that this isn't the case and there is actually quite a bit involved with the purchase of a firearm especially in shoddy states like California, New York, New Jersistan, and the rest.

What this means is that it's not like I can roll up to my local shop and order an AR-15 with a side of freedom fries and drive off with them within minutes. 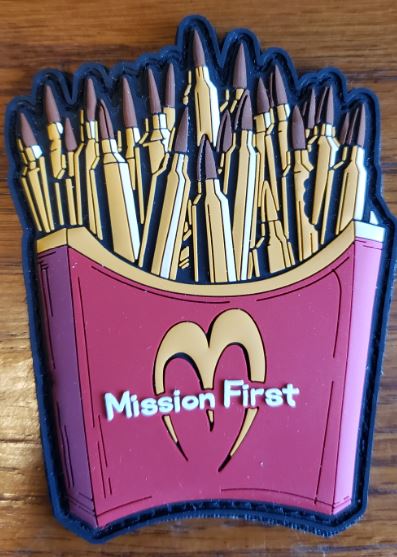 A freedom fries patch from my friends at Mission First Tactical from SHOT Show 2020.

Some elderly folks remember a time where mail-order gun sales were a thing, but that was before the anti-gun media at large decided that guns were bad and began to fabricate lies to push their agenda.

You could, no joke, buy a gun via mail and have it shipped to you and guess what? People weren't running around shooting each other. That's a rather recent thing within the last few decades.

And, moving on, there's this gem of a tweet I found, while doing my research for this article:

Say what now? Are they actually suggesting that there's somehow a correlation between the two? Do they want President Trump to demand gun shops shut down and open up shop as a COVID testing facility?

I love the guys at my local shop, but the last thing I need is for Justin to shove the q-tip an inch or two too far up my nose and hit my brain. No thanks.

I guess I'm missing the point, because I'm really curious what they're suggesting we do, here. I guess there are a couple of options that these fools would like:

How asinine is that? The number of gun shops versus the number of testing stations have no direct correlation to each other at all. These idiots just want to complain about something related to guns and have to point out that the evil gun shops outnumber the COVID-19 testing facilities a whopping 100 to 1.

Again, two totally unrelated numbers that have nothing to do with each other.

In reality, there are a lot of different businesses that have remained open depending on your region that also outnumber the COVID-19 testing places, but you rarely hear any outcry against them. Are they any more or less important than any other business?

Here's a novel idea, if you don't want to go to a gun store, drive thru or otherwise, don't. It's that simple.

Leave people who do things you don't like alone so they can continue to feed their families. Just like I have no plans to go into a liquor store, a marijuana dispensary, or even one of the many local restaurants that have remained open — you don't have to do something you don't want to do.

Lest we forget that this is Murica.

I have managed as of yet to NOT complain about about places I'm not going to, you know why? Because they have families to feed and ALL businesses are essential to some degree.

Don't like it? Don't go. It's that simple. And, we've already discussed why gun stores are essential businesses. Read up, and then leave your thoughts on this in the comments below.