Join Our Newsletter
Shop Our Store
MAIN MENUMAIN MENU
By Craig Martin on April 30, 2018 in Gear 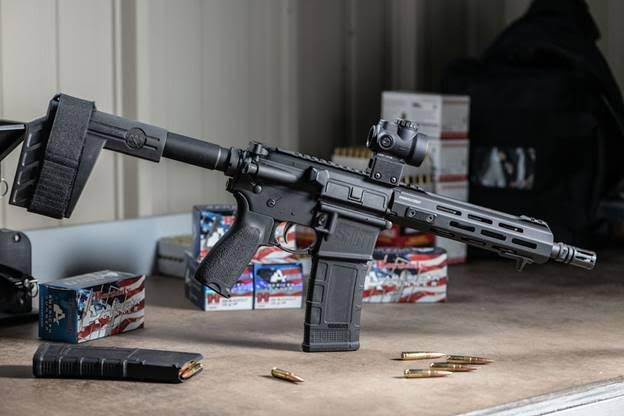 The folks at Springfield Armory are at it again, as they release a brand new line of AR-15 pistols that are chambered in the hard-hitting .300 BLK just in time for the NRA Annual Meetings.

Springfield Armory is obviously very excited about the new announcement and in a recent press release received by ConcealedCarry.com, Springfield gave us some insight on just what this new line of AR's is all about. Take a look.

With the success of Springfield Armory’s SAINT AR-15 Pistol in 5.56, more people than ever are requesting variations to the original version. The newest iteration in .300 BLK harnesses the power of this proven round for increased capability and versatility in a combat-grade platform.

The SAINT AR-15 Pistol features a rugged SB Tactical SBX-K forearm brace to reduce size, stabilize recoil, and enhance accuracy in one or two-hand shooting. A 9-inch CMV barrel with a 1:7 twist and A2 flash hider makes the SAINT AR-15 Pistol small, fast, and ideal for CQB. The barrel is Melonite treated inside and out to be as durable and more accurate than chrome lining.

The compact design is the perfect complement to the .300 BLK round making the SAINT AR-15 Pistol an ideal choice for home defense. At just 27.75 inches long, and weighing only 5.9 pounds, this new AR pistol in .300 BLK from Springfield Armory delivers a lot of power in a small, fast-handling package.

In addition to the above statement, Springfield has also announced the price of this piece of hardware, starting at $989. If you would like more information on this firearm, make sure you check it out on Springfield Armory's website.

Well, that depends a lot on what you're looking to do. But, one of the most important things to keep in mind is that .300 is much more expensive than 5.56/.223 is, so if money is tight, it won't likely work well for you even though it is better suited in some instances as a bad guy stopper.

But maybe the most important thing about this firearm, as with most firearms, is the “stopping power” and that is where these two calibers differ the strongest. With a 9″ barrel like Springfield's newest firearm has, the “stopping power” is an impressive 993 ft-lbs of force at 100 yards. Compare that to a 16″ barreled 5.56mm AR and you only get 742 ft-lbs over the same distance.

Where the .300 BLK really shines is in a home defense scenario where a suppressor can be used to reduce the concussive noise produced by this heavy-hitting round.

WHICH ONE SHOULD YOU PICK?

That's something only you can answer, but you really can't go wrong with either. For shorter range and a bigger punch, you're likely to want to look at the .300 Blackout. Whereas if you are looking for fast fire and little recoil you're gonna want to take a closer look at the 5.56mm, also available on Springfield's website.

Do you own any firearms chambered in .300 BLK? If so, let us know your thoughts in the comments below.

Should You Modify Your Carry Gun’s Trigger?
Simple and Effective: Why You Need to Use Dummy-Rounds