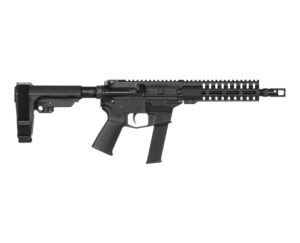 We've long said that a handgun is the obvious choice for concealed carry because you can actually fit a pistol on your body much better than you can a long gun like a rifle or shotgun. But make no mistake, in any ideal situation most people would rather have a longer gun to defend themselves if for no other reason than they're just all-around more capable.

Not to mention easier for most people to shoot accurately.

Truth be told, handguns are not the best choice for self-defense. The stuff you see in the movies when a bad guy flies back 10 feet through the air when hit with a handgun round is just not accurate. A handgun, while better than nothing, just isn't the best at stopping a bad guy.

Personally speaking, I have a handgun on my person whenever I'm awake. But even then, it's not my primary weapon of choice. My goal is to fight to a better weapon, if needed. A better weapon in my opinion is more often than not an AR-15, though I do have a few shotguns I'm more than comfortable with.

But that doesn't really help me when I'm out and about during those few times when I actually do go out right now. Does it?

Well, there are a few options I'm considering. Now, I'm just thinking out loud here and have not really settled on anything just yet, but I've got a potential solution for myself concerning a PDW (personal defense weapon).

And with the cluster we're currently finding ourselves in as a country, it makes even more sense to keep a more capable gun near you when you're out. But hear me out, I'm not an advocate of bringing a gun out to your car or truck and leaving it out there for thieves to take.

The only time I feel as though that is acceptable is if you have a dedicated car safe that is really hard for criminals to get into and lock your car up at night. And, even then, I still don't want to have it out in the car for long periods of time.

Your comfort level in where you leave your guns is up to you and I'm not going to tell you what to do.

The goal, at least for me, is to have a more capable weapon that I can stick in a bag, and quickly get to should the need arise. Of course, if it stays in the bag nobody will know the difference.

This thinking may defeat the purpose of a truck gun and may be more in line with being a concealed carry weapon, but again I'm still working through my thoughts on this, just out loud for y'all to join me.

I've recently requested a new gun to test and the company has agreed to send it my way for a loan. The firearm in question is the CMMG Banshee 200. While I asked for a different caliber, they've agreed to send me one chambered in 40 S&W.

Forty isn't my favorite caliber by any means, but it is a capable round and with the added barrel length and, therefore, muzzle velocity, it's even more capable in defensive scenarios.

In all honesty, I'm just thrilled that, with the gun shortage we're in right now, they're even willing to send me that one. Seriously feeling blessed here.

I feel like this is a good spot to say that this isn't going to be for a quick draw sort of self-defense scenario, but something I'd pull out if the world was melting down around me.

If I had to get out of Dodge, I'd holster the handgun and use the PDW.

After looking, I'd be getting about 200 feet per second more out of the Banshee than I would from a small 40 cal handgun like a G27. And because a faster, heavier bullet is more energy transferred to target, it's a more effective weapon.

I've also got a bag I plan to use to stick it in from Vertx, but the measurements are pretty close so I may need to use a messenger bag or something similar. But again, the goal is to remain discreet.

Stay tuned as I continue to figure this thing out. I've never been an advocate for off body carry, but with the world what it currently is, headed towards H.E. Double Hockey Sticks, I see the need to have extra fire power than I'd usually have.

I'll be turning this into a small series, so if this topic interests you make sure you're tuned in. Things I'll be working out is an optic, how I'll store it, the actual review itself, etc.

2 Responses to What About A Truck (or Car) Gun For Self-Defense?