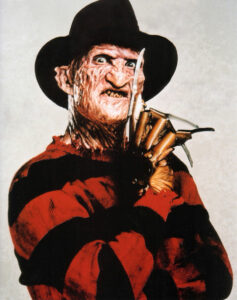 In San Antonio Texas, a man dressed as Freddy Krueger, the villain from “A Nightmare on Elm Street”, shot five people with a shotgun during a Halloween party early Sunday morning. This according to a police statement.

Two black males allegedly attended a Halloween party uninvited. Authorities say that they started an argument inside the house and then the homeowner asked them to leave.

One of the suspects, the man dressed as Freddy Kreuger then pulled out a concealed shotgun and began to shoot at the party-goers just before 5 a.m.

“I woke up my husband and said, ‘Hey, there’s a gunshot,’” said Cassie Nogueron, who has lived on Aspen Meadow for about three years. Nogueron lives right next door where the shots were fired.

‘There was about five or six more after that,” said Nogueron.

After making sure her family was safe, she surveyed the chaotic scene.

“People running to their cars, running away or running to the people that were hurt,” said Nogueron. “My gut instinct was to see does anybody need help was everybody okay.”

According to the police report four men and one woman were shot.

The suspects allegedly ran off after the shooting.

“It does make it more of a mystery of who was the person really because they didn't look like themselves,” said Nogeuron. In the three years they've lived here, she says nothing like this has happened before.

Crimetracker stats show that within a half mile radius of where this shooting took place, there have been more than 20 burglaries and seven robberies that have been reported since the beginning of the year.

As of the time of writing this article the suspects were still on the run.

This is a prime example of the fact that danger can strike anytime, anywhere. A party on Halloween turned into a horrible event which saw five people get injured. We here at USA Firearm Training sincerely hope that incidents like these can be avoided by citizens carefully and diligently looking out for themselves and one another. Preparing for as unlikely of an incident such as this could mean that should this happen around any of you, the carnage may be dramatically lessened, or avoided altogether.