Ok, stick with me this is going to be a bit of a story but it's worth reading through this… 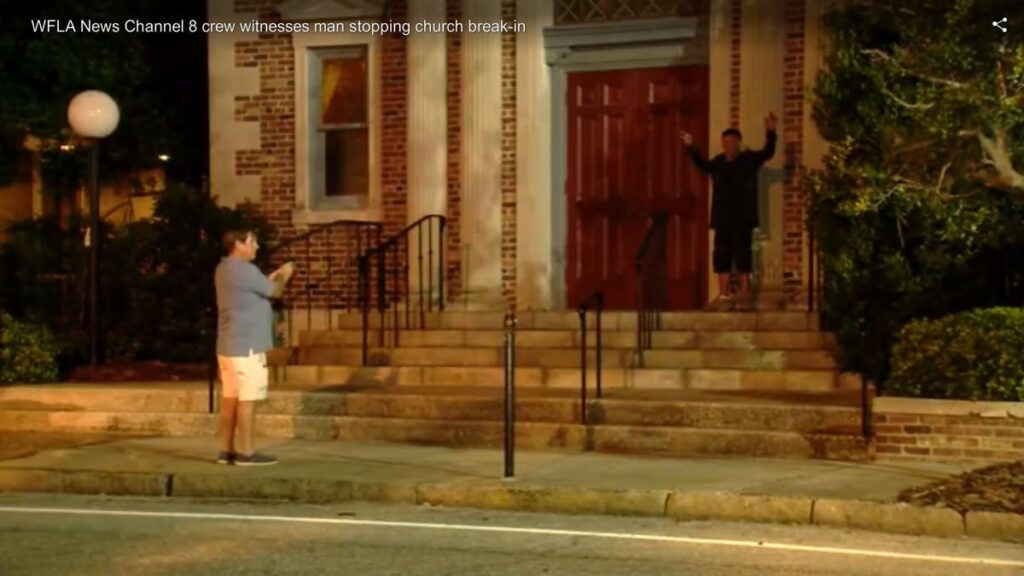 In early April of 2016 a NBC news team was driving down the road when they stumbled upon a man who had a firearm pointed at another man outside a church. They pulled over and started filming. This created a unique video because we got to see the arrival of police on the scene and the man taken into custody. Most of the time news teams only get a few witness reports and maybe a statement from the police.

A man was called and asked to head over to his church to board up the doors which had been broken into earlier that evening. He took his concealed carry pistol with him just in case.

When he arrived he found the burglar on the scene attempting to break in again. He drew his firearm and “held” the suspect at gun point until the police arrived.

The news team started filming only a few minutes before the police arrived on scene.

When the police arrive them come on scene firearms drawn on the burglar and they successfully arrest him and submit him to custody.

As far as one can tell from the video the police wholly ignore the concealed carry Good Samaritan.

I Have to Say A Few Things?

A lot of things about this surprised me. While I'm super glad to see another instance of justified concealed carry in action I also can't help as an instructor address a few of the greatest “learnings” from this incident.

We don't know what dispatch was told or what dispatch told the officers. Do NOT expect that your experience is going to be as positive or as good as it was for this gun owner.

The gun owner has one of the worst handgun grips and stances I've seen. Perhaps he started with a flawless grip and after waiting 10 minutes for cops his arms got tired? Either way please don't show this to people without pointing out how poor the gun grip is (Proper Handgun Grip).

The gun owner says repeatedly (at least I think it is what I hear) “Don't move.” These words are submitting the burglar to custody or preventing their escape with the threat of deadly force. Depending on the local laws and the feelings of the DA, the gun owner could be charged with aggravated assault or menacing. In most states gun owners don't have the right to prevent escape with the threat or use of deadly force. More on that with this article (When Does Citizens Arrest Become Assault) or this Podcast Episode (Why Gun Owners Are Getting Charged With Felonies).

There is also a point when the gun owner says “Drop your hands and I'll drop you.” Making threats like that may or may not be crossing a line, HOWEVER, there is something to be said for ensuring you can see the attacker's hands at any given point. What looks to be a very simple standoff could turn deadly when their hands drop down and retrieve a gun from their waistline or jacket.

When the cops arrive the gun owner doesn't seem too concerned with his own safety. I was shocked to see how readily the law enforcement  officers ignore the guy holding the gun. It worked out in this instance, but we teach students to work at making sure law enforcement sees them right away as the victim and to re-holster or set the gun down on the ground once its clear the officers are in control of the situation.

In this case we didn't see law enforcement make any requests of the gun owner but always be prepared to comply quickly with any instructions given by law enforcement when they arrive on the scene.

27 Responses to Police Arriving On Scene Caught On Camera