Join Our Newsletter
Shop Our Store
MAIN MENUMAIN MENU
By Joshua Gillem on June 18, 2020 in News 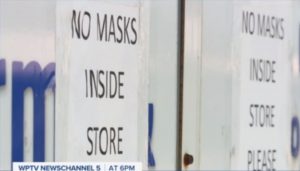 Some of the news this week revolves around a couple different gun stores. Both gun shops are facing unique situations. One of them is dealing with massive theft and the other is making a solid attempt at preventing theft as much as possible by taking a controversial stance.

Our first story comes out of Jacksonville, Texas and highlights the unique issues gun shops have to face with theft.

A couple of nights ago in Jacksonville, a vehicle was used as a battering ram to gain access to the inside of a gun shop. Gun stores take more measures than the average business to protect their goods, but even with all the extra measures, buildings are still penetrable.

The reason why they take extra measures is hopefully obvious. In case it is not, it's because the goods inside can be used to hurt other people in crime and nobody wants their guns to be used in crimes. Of course, it's also their livelihood and business and nobody wants to have their goods stolen.

So, the usual measures are putting bars up on windows, putting bars on any doors, and doing as much re-enforcing as possible at the weakest points of the building.

Except maybe cement columns put into the ground in front of the area, and that may still not even work.

All that can be done in this regard, is to catch the thieves afterwards by utilizing your high tech surveillance gear.

Unless, of course, you seem to not have any as is the case for this gun shop. I don't know if they didn't have cameras put in or if they just stopped working. Either way, having video in place for this type of scenario just makes sense. It will only help the police find the people who stole your stuff hopefully giving you an avenue to recoup some of your costs.

The estimated damage is $20,000 and in this climate with things looking how they are, that's not good news.

Gun Shop Disallows Wearing Of Masks While In Store

This one is going to catch a lot of heat I'm sure from at least some people. A gun store in southern Florida has adopted a new policy that goes against common medical thinking during the pandemic. They don't want people wearing masks in their stores.

It's not that they have a problem with people wearing masks, just that they don't want people in their store wearing masks that may have ill-intent. And because you never know who has ill-intent until after it's over, they'd rather just be able to see everyone's faces.

The owner of the store said this to wptv.com in an interview:

We have zero problems with the mask as a concept. It's just the safety issue. We have people in store and we don't want any problems.

He did also say that if you really want to wear a mask that they'd work with you just as long as you called ahead to make proper arrangements.

And as we've seen, more and more criminals are exploiting the now socially acceptable use of the face mask to aid them in their crimes. Just as recent as a few months ago, if you walked into a store with a mask on you'd get all sorts of looks by people wondering what your intent was.

Nowadays, you get funny looks for not wearing a mask and this just exacerbates the problem as more and more criminals commit crimes with growing ease.

For gun stores and businesses all over the country, new ways of staying safe is a must. If you own a gun store you have to take the proper measures to keep your store and customers safe. That means taking the usual steps to prevent robbery, but also installing security cameras and, maybe even requiring that if people want to shop in your store, that they don't wear masks.

That last one is a bit tricky, and I'm not sure I'd shop at a store were no masks were allowed, but I'm a believer that if it's their business it's their prerogative. Much in the same way that it's my life, and I can choose to shop there, or not.

Leave your thoughts on these stories in the comments below.

3 Responses to Gun Stores, Robberies, and N95 Masks — Oh My!