Join Our Newsletter
Shop Our Store
MAIN MENUMAIN MENU
By Craig Martin on November 30, 2016 in News 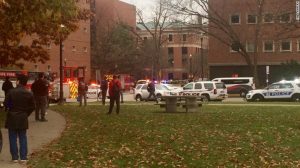 In Columbus, Ohio another tragedy has struck a college campus as a suspect was shot dead by police following an hours-long lockdown on the Ohio State University campus that left 11 people injured.

The university went into lockdown on Monday morning when the attacker, identified as Abdul Razak Ali Artan, a young Somali immigrant drove into a crowd at the university. Officials confirmed Artan, 18, was a legal US resident and a student at the university.

Ohio State campus police stated that the attacker purposely began his rampage by driving over a curb and into pedestrians before getting out of the vehicle and stabbing people with a butcher's knife. “He exited the vehicle, and used a butcher knife to start cutting pedestrians,” said Craig Stone, chief of police at the university. “Our officer was on scene in less than a minute and he ended the situation in less than a minute. He engaged the suspect, and he eliminated the threat.”

Ben Johnson, a spokesman for Ohio State University, also confirmed that Ali Artan was shot dead by the officer, before adding that injuries to the students involved in the attack included stab wounds and being struck by a vehicle.

Earlier in the day, the university's website and twitter account warned students that there was a gunman on the campus and they should “run, hide, fight”.

“Run, hide, fight” is the standard protocol on college campuses for active shooter situations. It means: Run, evacuate if possible; Hide, get silently out of view; or Fight, as a last resort, take action to disrupt or incapacitate the shooter, if your life is in imminent danger.

The university in Columbus followed up with another tweet that said: “Continue to shelter in place in north campus area.”

Television footage showed students leaving school buildings as Rebecca Diehm, spokeswoman for the Columbus fire department, said eleven people had been transported to a hospital. One student was in critical condition, and the rest were stable, she said.

A student, Joseph Noll, said he heard a fire alarm, but no shooting, and also said a car had driven into the crowd.

“I was right there, and there was no one shot,” he told WBNS, a local Columbus TV station. “Someone did run over a crowd of people with a car. I just heard some screams, and I saw people running. And everyone just fled the scene immediately.” 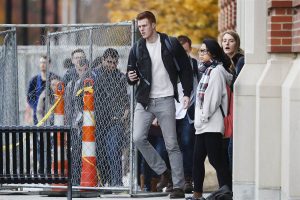 There was a lot of confusion that surrounded the incident. As most situations such as this bring about. Below is a timeline of events that will give you a taste as to what kind of chaos can ensue in a tragedy such as this, even amongst trained professionals.

9:52 a.m. — A man later identified as OSU student Abdul Razak Ali Artan drives a car over the curb and into the crowd outside Watts Hall. When the car stopped, he jumped out and stabbed several with a butcher knife.

9:55 a.m. — OSU issues a Buckeye Alert, an electronic notification to students and workers of danger on campus.

11:14 a.m. — OSU lifts “shelter in place” alert, notifying the campus community that the danger is over and that Monday classes are canceled.

So as you can see, by this unfortunate tragedy, the ability to stay calm is going to be tested to the utmost. Should a situation like this ever occur, your training and your stability could not only affect your own safety but the safety and steadfastness of those around you.

Tragedies like these are unfortunately common in the world that we live in. We need to be prepared for them, so that the chaos does not erupt into something even greater than the events that did occur at Ohio State University.

Episode 74: What Now? Dealing With the Gun AFTER It’s Been Used
An Open Letter to Senator Tim Kaine