Join Our Newsletter
Shop Our Store
MAIN MENUMAIN MENU
By Joshua Gillem on May 15, 2020 in News, Opinion 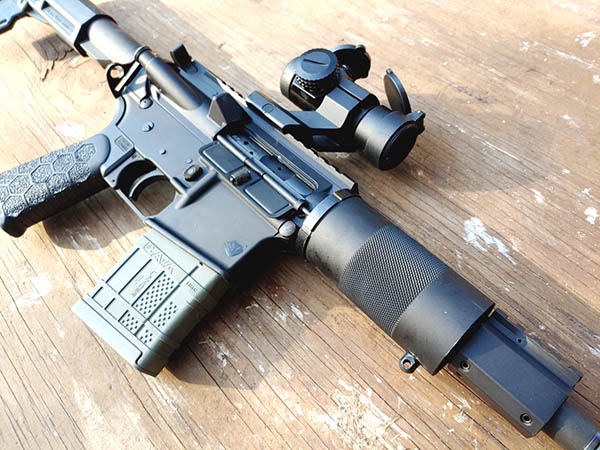 Even with all of the other stuff going on right now with a global pandemic and a current United States unemployment rate nearing 15%, certain legislators haven't let up on their push for gun control. The most recent gun control points to come out is in regards to what they call “ghost guns.”

A so-called ghost gun is nothing more than a lump of material that may or may not resemble a firearm that is technically not a complete, functional gun until more work is done to it to turn it into a fully operational gun.

Politico recently reported that a group of 15 anti gun senators are introducing a bill to restrict those pieces of plastic and metal that aren't technically anything more than paperweights as they sit in an attempt to somehow serialize them and make us go through background checks before purchasing.

These senators, to include Richard Blumenthal of Connecticut (who attempted a similar scheme in 2018 that failed) and Chuck Schumer of NY have teamed up with other senators to make another attempt at extinguishing our freedom.

If it becomes law, it would require that all guns, and these 80% and “kit-guns” would be considered as such, would need to be “traced by the BATFE” starting 1-1-2022 with a serial number.

Explaining why this bill is being introduced, we pulled the following out of the Politico article:

“There has been a tremendous proliferation of firearm sales generally, but most particularly for these types of untraceable weapons that essentially provide ‘crime guns’ that are really dangerous,” Blumenthal said in an interview. “They are clearly a means to evade the current federal laws.”

Blumenthal and other Senate Democrats also note that such untraceable weapons are turning up more frequently at shooting scenes, including mass shootings.

“People are more stressed” since the coronavirus crisis began, Blumenthal added, noting that gun sales were up by more than 70 percent in April from a year earlier. “They’re buying more firearms. The incidence of domestic violence have risen.”

The first two parts of the above quote can be debated, but what cannot be debated because it's asinine, is the last part.

Reading between the lines, we can see that the senators have somehow made the connection of a supposed domestic violence increase and “untraceable ghost guns” being some sort of problem.

While that paragraph doesn't mention “ghost guns” by name, the entire article talks about them. Maybe I'm missing something but I'm not seeing how the two are connected.

Even more disturbing is that the rise in domestic violence cannot currently be proven. While we all suspect that it might be on the rise, studies are showing that domestic violence 911 calls are falling drastically in at least some cities. I don't claim to understand these stats and don't wish to downplay the issue, but The Marshall Project found that domestic violence reports have dropped between 18 and 44 percent in the three cities they analyzed.

While that is a massive drop, I cannot comment on whether this information is true or false. What I can comment on, however, is that these senators are liars because they're implying that “ghost guns” are somehow responsible for a rise in domestic violence that they cannot currently prove is even taking place.

They can't possibly know that domestic violence is on the rise when the reports are not only dropping, but it's currently nearly impossible to track because of the way the country is currently running due to the pajama party I like to call Corona Time.

It seems as if we've caught the liars red-handed … again.

Perhaps the most surprising thing from that article is a quote from a pro-gun Texan senator saying he'd be open to such legislation concerning these 80% completed guns.

Below is a quote from the above-linked Politico article, which I find very interesting:

I guess you can look at it that you’re buying an assembled gun or an unassembled gun. Cornyn said. To me, the same standard makes sense.

The truth of the matter, though, is that it goes much further than being assembled or un-assembled. 80% guns aren't even guns. Trust me, I've completed a few of them and I've utterly destroyed, on accident, two of the three I've made an attempt at.

Once you get the hang of it, it does get easier. But the main thing to keep in mind is that a “ghost gun” is NOT an un-assembled gun. It's not a gun at all until it's made into one. That's the difference.

So, I've accidentally destroyed 2/3 of the ones I've attempted, and the third one is unreliable, at best. Can you imagine if I had to go through a background check 3 different times for stuff I cannot even use?

There is absolutely no guarantee that you'll have a functional gun once it's built.

And, where does it stop? What constitutes a “kit gun?” Is a replacement slide a “kit gun” because you can put it on a gun? How about a barrel? A bolt? Any of those parts can be used to make a gun when combined with other parts, and I'd rather not have to go through a background check for each item.

I've made the personal decision that I'd never finish an 80% gun again. It takes too much time and energy when I can just go buy one.

Even still, I'd like the option to build one. If you're interested in building one for yourself, because why not, Brownells usually has some 80% stuff in stock. Check it out while you still can.

5 Essential Traits Every Carry Gun Needs
You Decide: Are These 3 Items Good Pieces of Gun Gear?

One Response to Are Background Checks For 80% Guns On The Horizon?